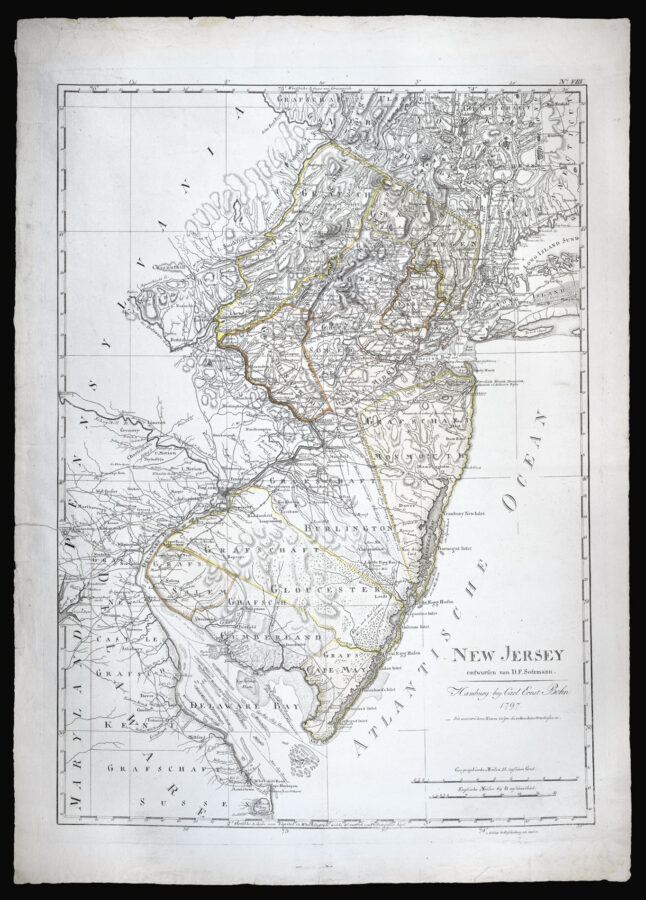 Published in the Ebeling-Sotzmann ​‘Atlas Von Nordamerika’ designed to accompany Ebeling’s (1741–1817) 7 volume ​‘Erdbeschreibung und Geschichte von Amerika, die vereinten Staaten Von Amerika’. The independence of the United States created a desire for information about the new republic in Europe as well as in America and Ebeling’s grand atlas was ​“one of the most comprehensive, detailed, and sympathetic geographic descriptions of America” (Ristow).

New Jersey is shown bounded by the Delaware river in the south and east, the boundary line settled by the Commissioners in 1769 with New York in the north, and the Hudson River and Atlantic Ocean in the east.

Sotzmann (1754–1840) is known to have completed only 10 maps of an intended 18, including Vermont, New Hampshire, Connecticut and Massachusetts in 1796; Rhode Island, New Jersey, Pennsylvania, and Maryland & Delaware (on a single sheet) in 1797; Maine in 1798; and New York in 1799. Complete sets of all 10 maps are very rare, and only a handful of institutions hold them, including the LOC and Harvard. ​“This series, thus, is among the rarest of cartographic Americana for the closing decade of the 18th-century” (Ristow, page 176).

For his map of New Jersey, Sotzmann used William Faden’s celebrated ​“The Province of New Jersey, Divided into East and West, Commonly Called the Jerseys”, 1777, which in turn was based on the survey work of Bernard Ratzer, and which had settled the boundary between New Jersey and New York. Sotzmann has reduced Faden’s map and replaced his elaborate title cartouche with a more austere title and scale lower right. Gone too are Faden’s astronomical observations. However he has added the names of new towns, meeting houses are located, and the northern boundaries have been updated to 1769 with the latest geographical information; the delineation of the Cape May peninsula has also been changed.

Sotzmann was born in the Berlin suburb of Spandau and was apprenticed to Engineer Captain Materne. ​“He received training in engraving as well as drafting, and his earliest cartographic contributions were, in fact, as an engraver. From 1773 to 1778 Sotzmann was a building superintendent in Potsdam, and in 1778 he was appointed secretary and architect of the General-Tabaksadministration. Sotzmann was named geographer of the Akademie der Wissenschaft in Berlin in 1786. He became secretary and controller of the academy’s Engineering Department, later the Military Department, in 1787” (Ristow page 177).