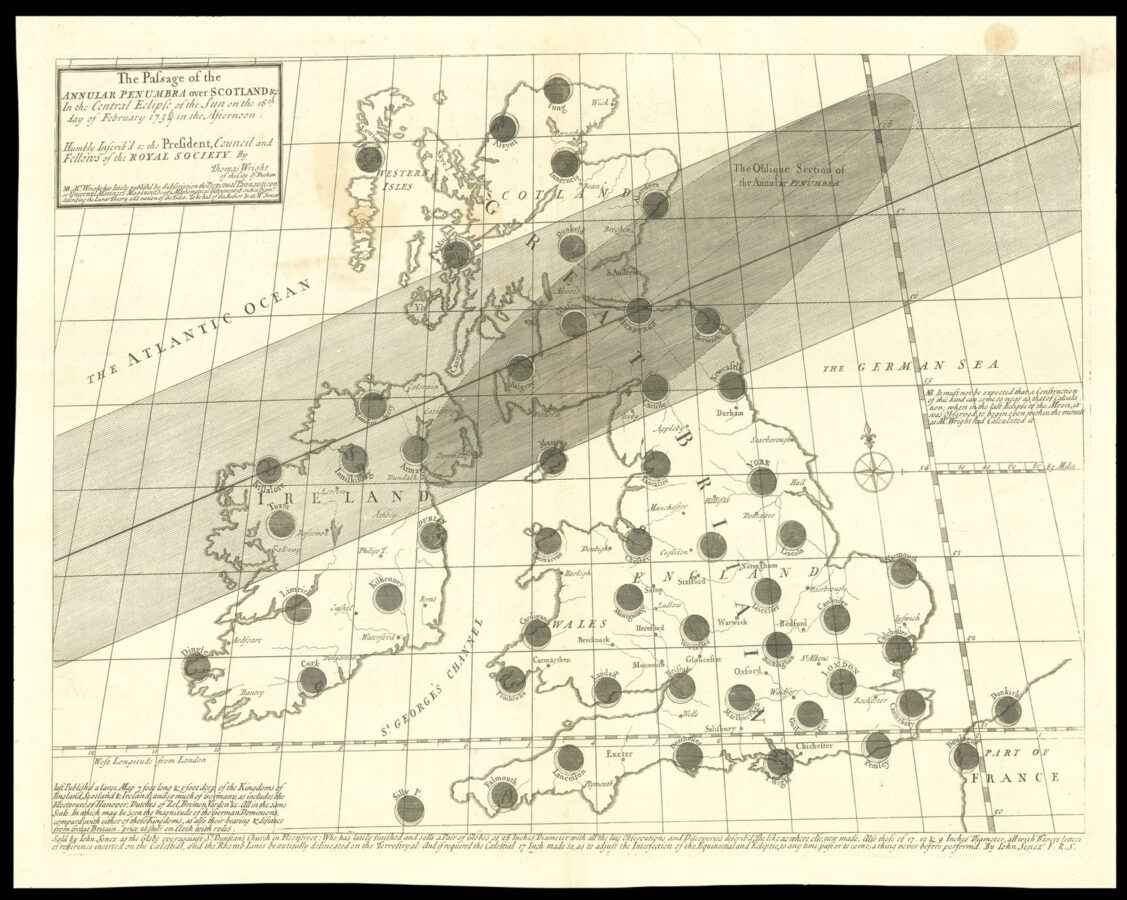 The Passage of the Annular Penumbra over Scotland &c. In the Central Eclipse of the Sun on the 18.th day of February 1736/7 in the Afternoon. Humbly Inscrib’d to the President, Council and Fellows of the Royal Society. By Thomas Wright of the City of Durham NB. Mr. Wright has lately publishd by Subscription the Perpetual Pannauticon or Universal Mariners Magazine, being a Mathematical Instrument 18 inches Diamr. describing the Lunar Theory and motion of the Tides. To be had of the Author & at Mr. Senex’s.

Wright’s second predictive map of the 1737 eclipse is altogether more accessible; the passage of the penumbra is overlaid on a simple map of the British Isles, the track marked by a shaded band running from south-west to north-east, passing directly over Edinburgh. There are fifty-two drawings of the eclipse placed over the map; that the eclipse would be total at Edinburgh is designated by the shadow of the moon being drawn at totality, with the full annular effect (when the moon only partially eclipses the sun, but passes centrally over it to leave an outer circular ring of light). At other places, the overlapping circles show the ​“figure of the eclipse”, or the extent of the eclipse of the sun. Within this band is also shown an oblique section of the penumbra, designated with heavier shading.

As with its companion, Wright’s ​“General Construction of a Solar Eclipse”, the map was first advertised in the London Evening Post (issue 1383) for 25th — 28th September, 1736, the announcement ending:
“… Sold by John Senex at the Globe over-against St. Dunstan’s Church in Fleet-street. Where may be had, A Map, shewing the Passage of the Penumbra over England, Scotland and Ireland, in the Annular Eclipse of the Sun, that will happen in February next, price 1s. Also the General Construction of the same Eclipse, curiously delineated, price 1s. 6d.“

Senex started advertising the map more heavily in January 1737, seemingly a straightforward commercial response to George Smith’s rival delineation of the eclipse, touted as ​“A Method vastly superior to any Thing of the like Nature yet attempted, and probably the last Improvement that can ever be made to Solar Eclipses”. Wright, however, was less pragmatic, and got into an heated public row with Smith and his publisher Edward Cave, accusing Smith of plagiarism and incompetence, with Smith replying in similar vein, much of this conducted in the correspondence pages of the Grub Street Journal, a contemporary satirical magazine. While charge and countercharge were long-winded (with both seemingly also contributing under pseudonyms), Wright did claim that this map was originally published nine months earlier, counting back from mid-January, so perhaps mid-May (if he can be trusted on this point).