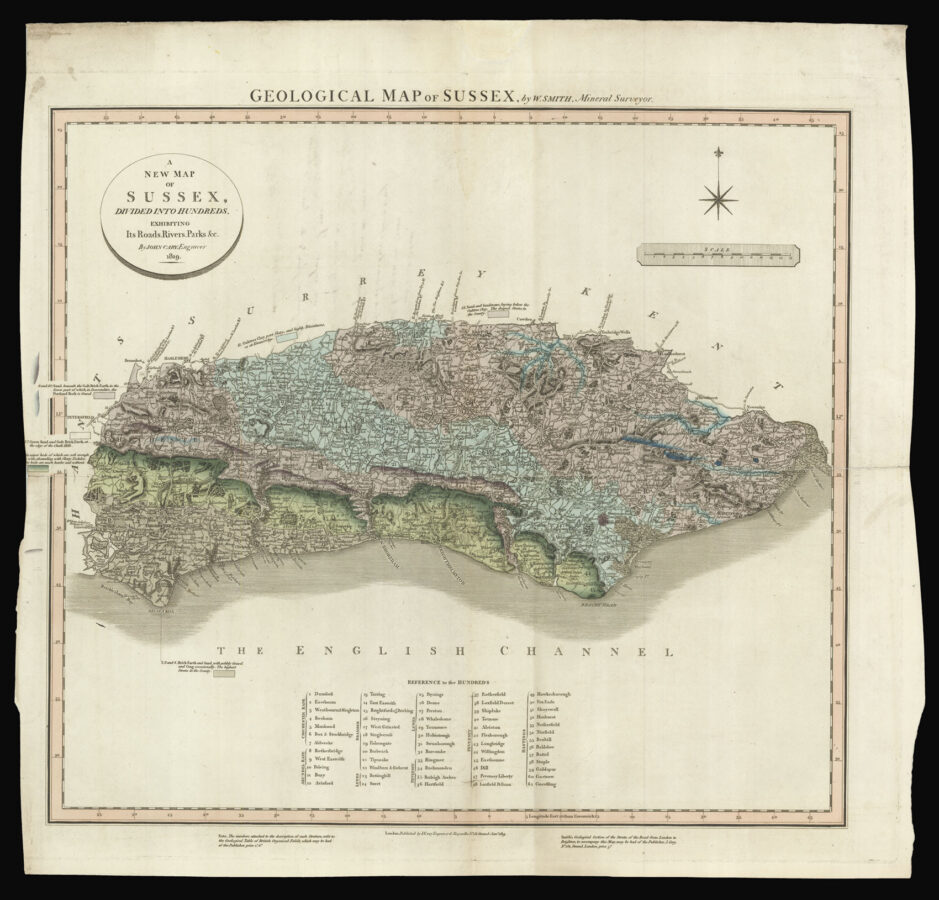 First edition of William Smith’s geological map of Sussex, one in a series of county maps produced by Smith, each separately issued, which were the first detailed geological maps of specific areas. Smith’s individual maps are extremely rare on the market.

​“All the county maps published contain much more information than was shown on Smith’s large map of 1815, and indicate that during the intervening years he had done much to increase his knowledge. The maps are based on Cary’s county maps, and are headed ​‘By W. Smith, Mineral Surveyor.’ Each map measures 21 ½ inches by 19 1/4 inches [across the ruled border]; the scale varies slightly but averages 3 miles to an inch.”–Sheppard, William Smith: His Maps and his Memoirs (1920), p. 155.

Smith’s map of Sussex was first published by Cary in 1819, alongside Norfolk, Kent and Wiltshire. It is a reissue of Cary’s map of 1801, with the addition of the geological information.

In his major work ​‘A Delineation of the Strata of England and Wales with part of Scotland’ of 1815, Smith ordered the strata through a colour key, whereas here he identifies them by name and number with coloured boxes, and places them around the boundary adjacent to their outcrop. On this map, a box and its related text overlap the engraved border.

2, 3 and 4. Brick Earth and Sand, with pebbly Gravel and Crag occasionally. The highest Strata in the County.
5. Chalk, the upper beds of which are soft enough to mark with, abounding with flinty Nodules. The under beds are much harder and without Flints.
6 and 7. Green Sand and Golt Brock Earth, at the edge of the Chalk Hills.
8 and 10. Sand, beneath the Golt Brick Earth, in the lower part of which in Dorsetshire, the Portland Rock is found.
11. Oaktree Clay, part Slaty, and highly Bituminous, as at Kimmeridge.
13. Sand and Sandstone, laying below the Oaktree. The deepest Strata in the County.