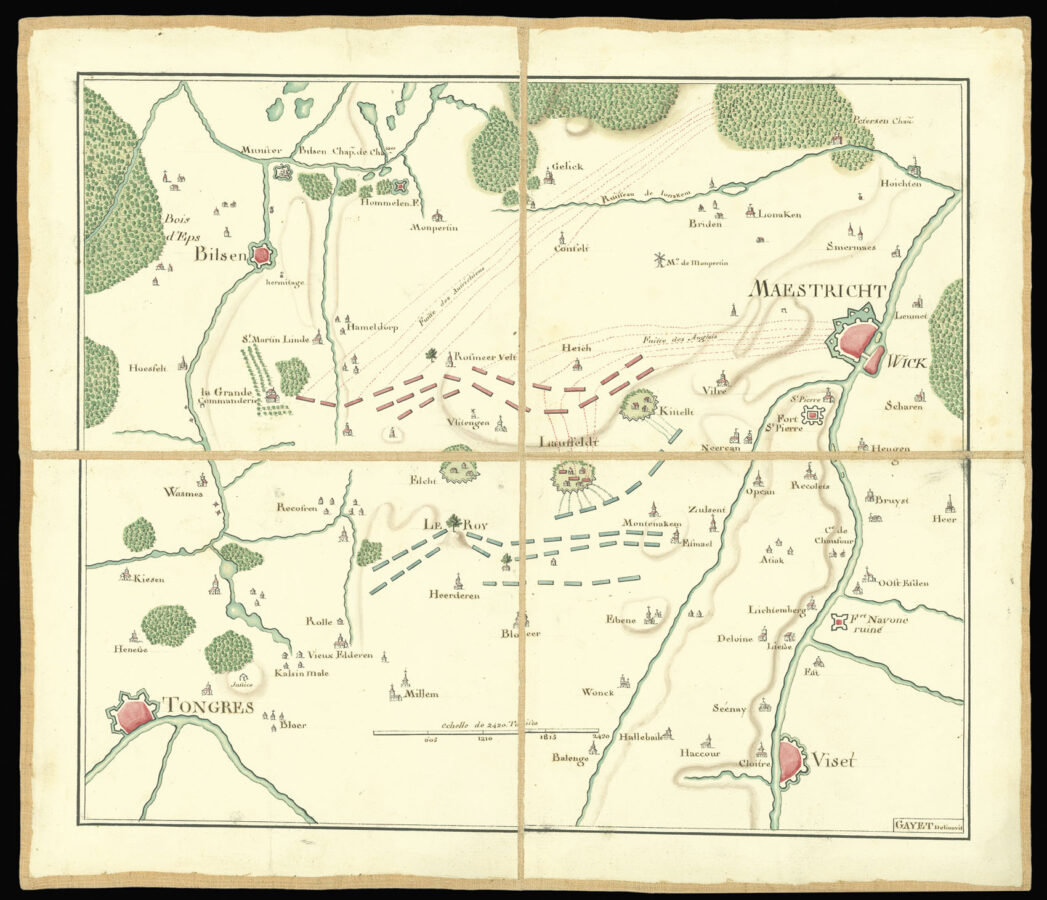 Small sketch plan of the battle of Lauffeld

Small sketch plan of the battle of Lauffeld.

The battle took place upon the 2nd July 1747, and was one of the largest confrontations during the War of Austrian Succession.

The build up to the battle had been relatively slow. The allies had concentrated their forces around Maastricht, but had been relatively idle in advance and were genuinely surprised to find the French were already nearby with their entire army. The French sought to take the city and therefore had to take the initiative and defeat the allies. This Maurice de Saxe did on 2 July. Awkwardly enough, allied high command expected no attack to be forthcoming and enjoyed a comfortable breakfast at Alden Biesen. Meanwhile, the French had reinforced their own left flank — opposite the best allied positions, and near Louis XIV’s observation post at Herderen, and sent hussars out for reconnaissance. Early morning mist obscured the battlefield for a while, but at 9:30 the French batteries opened fire and allied command hurried back to their posts. The battle had begun.

The opening assault came by the infantry regiment d’Estrées, which took the village of Montenaken, clearing the way to Lafelt. A very weak defence convinced the French only light resistance would be offered, but the first two attacks on Lafelt were bloodily repulsed. More regiments were now sent, including marines and the Irish brigade, in addition to the troops who had already been repulsed. Ten artillery pieces were given to them as well. This time, the attack crossed the slope, broke past the hedges and penetrated deep into the village. But a counter attack led by Cumberland in person drove the regiments out of the village, where they maintained their position near the hedge. But by now the additional artillery had arrived and started pounding the allied artillery supporting the village. At the fourth charge, the village was finally captured in full, although no breakthrough to the north was achieved. Because the French had by now mostly run out of ammunition, they were once again thrown out.

Maurice de Saxe realised that every moment the British and Hanoverians clung on to the village would strengthen their position, so he hurriedly sent three extra regiments to the village. Their commander, general Guerchy, sent some of his men to in stead attack a battery that had been supporting the village’s defence. With no backup, the artillerists quickly ran and the French obtained a very beneficial height advantage, which they used to drive back allied reinforcements on the lower terrain. Hessian infantry and Dutch cavalry were also driven back, and French cavalry chased them down, in the process driving back British and Austrian troops as well, before returning to their own lines. The allied army was in serious disarray, with parts of it already withdrawing. This withdrawal was prevented from turning into a rout by general Ligonier, commander of the British cavalry, who charged directly at the French lines in the first serious allied attack on the already established French position. This caused confusion in their ranks and won the allied army time to withdraw in reasonably good order. Ligonier’s charge was, however, defeated, and the man himself was captured.

The French victory — although at a high cost — paved the way to the successful siege of the Dutch fortress of Bergen-op-Zoom.