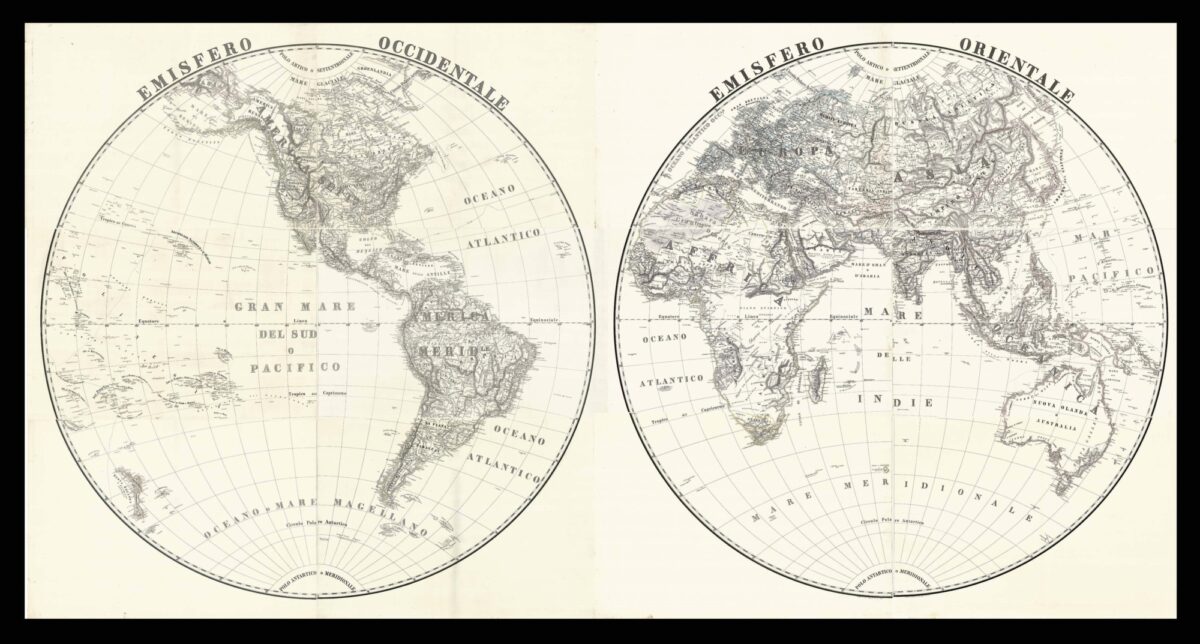 A colossal world map made on the orders of the ducal court of Parma, created by the state engineer Evangelista Azzi and published in Parma by the fine art printer Paolo Toschi: one of only three known examples.

The map was commissioned by the court of Duchess Marie Louise of Parma, the ex-wife of Napoleon Bonaparte, and a great patron the arts and sciences. It shows the geographical and political divisions of the mid-nineteenth century. In North America, the area beyond the Rocky Mountains is largely conjectural, shown before the expeditions of the 1840s and 1850s. Texas appears as part of Mexico, as it was yet to be recognised as a republic, despite its declaration of 1836. The edges of Antarctica are visible in the South Atlantic, including the ​‘Terre della Trinità’, where Admiral von Bellingshausen discovered the continent in 1820.

Europe is shown with its post-Vienna Congress boundaries, with Germany and Italy (prominently featuring Parma) divided into numerous states; Russia, controlling much of Poland and all of Finland; a large ​‘Imperio Austria’ (Habsburg Empire); and much of Southeast Europe being ​‘Turchi Europea’ (Ottoman Europe). The Arctic regions above Europe feature new information, such as the point to the north of the Spitsbergen Archipelago reached by the British explorer William Edward Parry in 1827 (82°45’N), which was the northernmost point on the globe ever reached, a record that would last for the next 49 years.

The Indian subcontinent is dominated by British India, which is divided into the three Presidencies of the East India Company, while in Southeast Asia ​‘Singhapour’ is visible (founded in 1819). The far north of Siberia shows that some areas had been discovered by Europeans only quite recently, such as ​‘Na. Siberia’ (the New Siberia Islands), encountered in 1810. Australia has a nearly complete coastline, following the surveys of Matthew Flinders, although its interior is almost completely blank. The only major detail that appears is the Murray River, explored by Charles Sturt in 1829.

Maria Louisa of Austria (1791–1847) was the eldest child of Emperor Francis II. She married Napoleon Bonaparte in 1810, but after his defeat and exile in 1814 was inserted into the Duchy of Parma and Piacenza by her father to rule it as a client state of Austria. She was a popular ruler and a key patron of the arts and sciences, reinvigorating the Ducal Academy and supporting the Teatro Real, the opera house that launched the careers of Giuseppe Verdi and Vincenzo Bellini. She also had a sophisticated appreciation of cartography, commissioning the first scientific survey of the entire Duchy in 1821, popularly known as the
​‘Carta di Maria Luigia’.

Evangelista Azzi (1793–1848) was an Italian cartographer and surveyor. In 1820, he joined the mapmaking division of the Imperial Austrian Army, and played a leading role in the creation of the ​‘Carta di Maira Luigia’. He was subsequently appointed the chief of topographical engineering and the drawing-master at the ducal military college. He had already completed surveys of the three main cities in the duchy — Parma, Piacenza and Guastalla — making him the ideal candidate for the large world map project.

The map is one of the last great examples of court patronage of cartography in Italy and was issued in limited quantities. Only two other examples are known, those in the British Library, and the Archivo di Stato di Parma. The rarity of the map is due not only to the fact that very few examples were ever published, but also to the exceedingly low survival rate of maps of such enormous dimensions.