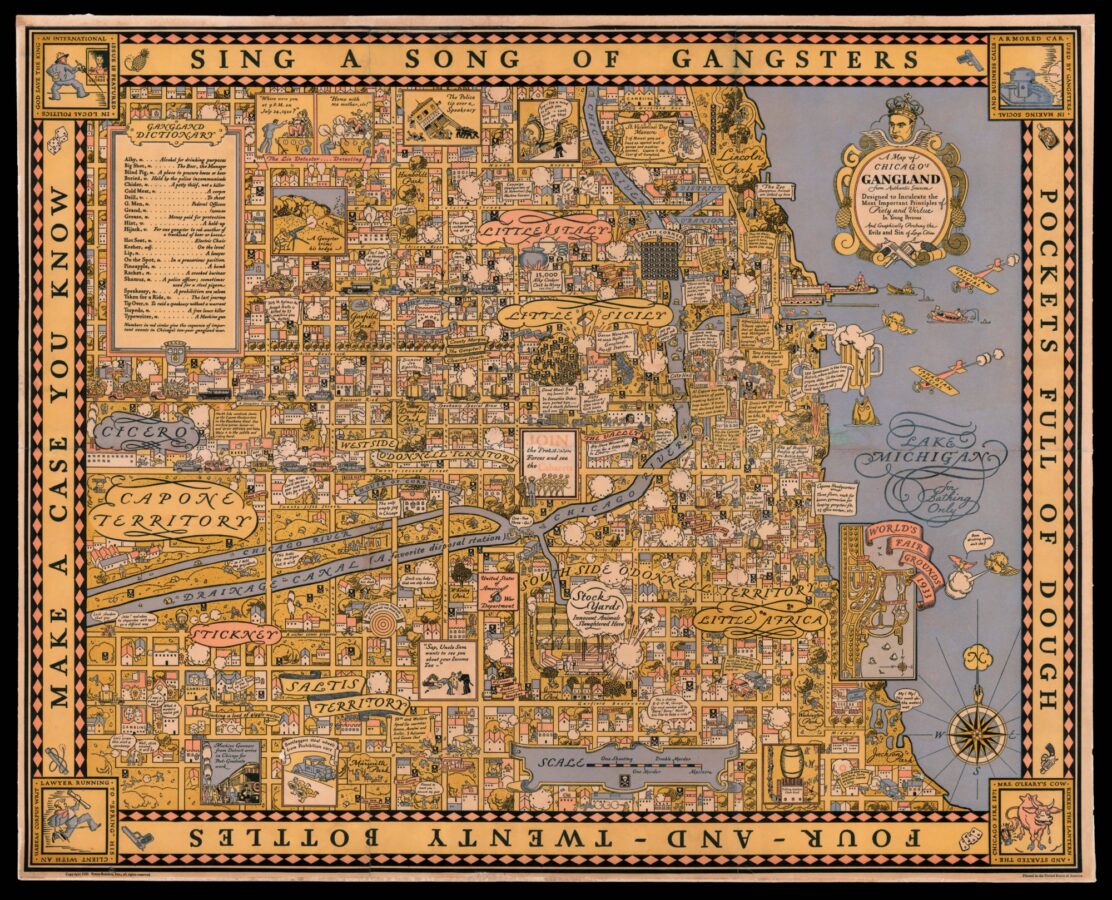 “Sing a song of gangsters, a pocket full of dough, four-and-twenty bottles make a case you know!”

A Map of Chicago’s Gangland from Authentic Sources. Designed to Inculculate the Most Important Principles of Piety and Virtue In Young Persons and Graphically Portray the Evils and Sin of Large Cities.

A fascinating and amusing map of Chicago, showing the city during the gang warfare of the 1920s and Prohibition. Chicago was a hotbed of organised crime, and was home to one of the most famous criminals of the twentieth century, Al Capone. Capone’s crowned head appears above the title cartouche: the year the map was made, 1931, he was finally imprisoned on tax evasion charges, referenced in a vignette at the lower edge.

Despite the undeniable chaos wrought on the city by organised crime, the producers of the map have approached the subject with a certain black humour. At that time, Chicago’s lawlessness was an object of media fascination, receiving copious coverage in national newspapers and serving as dramatic fodder for many Hollywood scriptwriters. The map seems targeted at fans of these mobster stories, marking spots of famous killings, sites of clashes between police and bootleggers, and the homes and headquarters of notable gangsters. Its rarity is due to action taken by officials participating in organising the upcoming World’s Fair. Fearing the map would leave a negative impression on prospective visitors the vast majority of these maps were destroyed before the fair took place.

It is surrounded by a graphic border with text running through it, reading ​“Sing a song of gangsters, a pocket full of dough, four-and-twenty bottles make a case you know!”: a riff on the nursery rhyme ​“Sing a song of sixpence”. In the corners are vignettes of a tank, ​“used by gangsters in making social calls”; the cow belonging to Catherine O’Leary that supposedly started the Great Chicago Fire in 1871; a ​“lawyer running to spring his client”.

In the compass rose, the north arrow is a hand shooting a pistol. The scale bar is marked from ​“One Shooting” to ​“Massacre”. There is a ​“Gangland Dictionary” in a cartouche to the left, giving definitions of contemporary slang words. The pineapples in the title cartouche are explained: pineapple is slang for bomb.

Chicago itself is divided into the territory controlled by different gangs, with the river (“A favourite disposal station”) bisecting the city. Numbers mark the sites of important events in gang warfare. Greatest prominence is given, unsurprisingly, to the St Valentines Day Massacre in 1929, where seven members of the North Side Gang were murdered by Al Capone’s men from the South Side Gang. The small skull and crossbones images mark sites of execution orders: particularly prolific locations include ​“Death Corner” at the intersection of Oak Street and Milton Avenue, where 50 deaths are recorded, and ​“Dead Man’s Tree” on 725 Loomis Street, with 30.

Prohibition would not end until 1933, but the ineffectiveness of the policy is shown throughout the map. Lake Michigan is pictured with aircraft labeled Canadian Special which frequently flew in from Canada loaded with cargoes of cases containing alcoholic beverages ready to be enjoyed by the public in one of the many speakeasies throughout the city. The streets are dotted with speakeasies and breweries. At the lower left by Washington Park there is a ​“Filling Station (Not Gas)”. By the prison on the Chicago river there is a note: ​“The only empty jug in Chicago”.

Both the flouting of Prohibition laws and the continued violence was of course possible through the corruption of local authorities. Pig’s heads with crossed eyes denote ​“blind pigs”, or police who could be trusted to look the other way. A funeral procession is passing through the streets in the north of the city, with a truck of flowers ​“from Al” and a carload of ​“friends from City Hall”.

Bruce Roberts were a Chicago-based publishing company, producing works on subjects from contract bridge to marital sex. The original author of the map is unknown, but they were in all likelihood influenced by the graphic style of MacDonald Gill’s 1913 ​‘Wonderground’ map of London (Burdon).

There are institutional copies in the Newberry Library, Chicago, Library of Congress, and the University of Illinois.