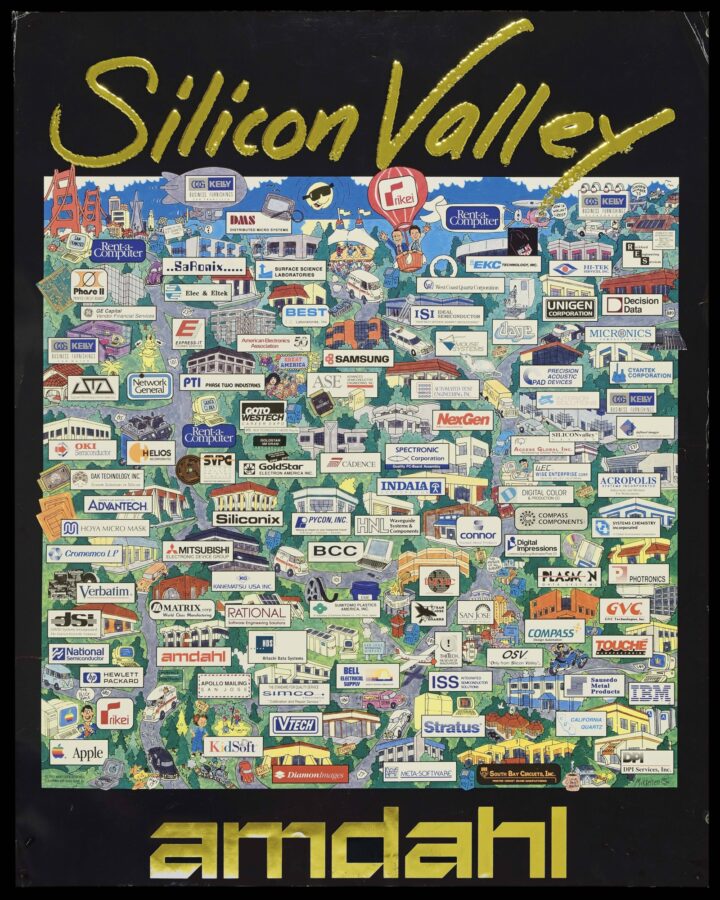 By MIKKELSEN [for Amdahl Corporation], 1992

An amusing promotional poster illustrated with a pictorial map of silicon valley, showing the locations and offices of the major technology companies based there in 1992.

This poster was commissioned by Amdahl Corporation, who likely gave it away to clients and employees. Founded in 1970 by former IBM chief architect Gene Amdahl, the company was an early competitor to IBM. It produced cheaper, faster and more reliable high-end mainframe computers that were ​“plug compatible” with IBM’s software and peripheral devices. IBM took a combative approach to their competitor, causing Gene Amdahl to coin the term ​“FUD,” which is defined in the ​“The Jargon File,” the programmer’s equivalent to urban dictionary, as ​“the fear, uncertainty, and doubt that IBM sales people instil in the minds of potential customers who might be considering [Amdahl] products.” By the early 1990’s, when this poster was published, Amdahl was suffering major losses due to a stark decline in mainframe computers sales. As such, the company had begun to diversify into other services, such as software production, data storage, and consulting. When IBM introduced a 64-bit processor in 2000, Amdahl admitted defeat and abandoned hardware entirely. The company is now a subsidiary of Fujitsu.

The design of the poster, with a gold spray paint inspired font used for the title, is characteristic of the early 90’s, while the cartoonish style in the pictorial map is representative of the laid-back unconventionality that is stereotypical of Silicon Valley and its innovative, tech-savvy inhabitants.