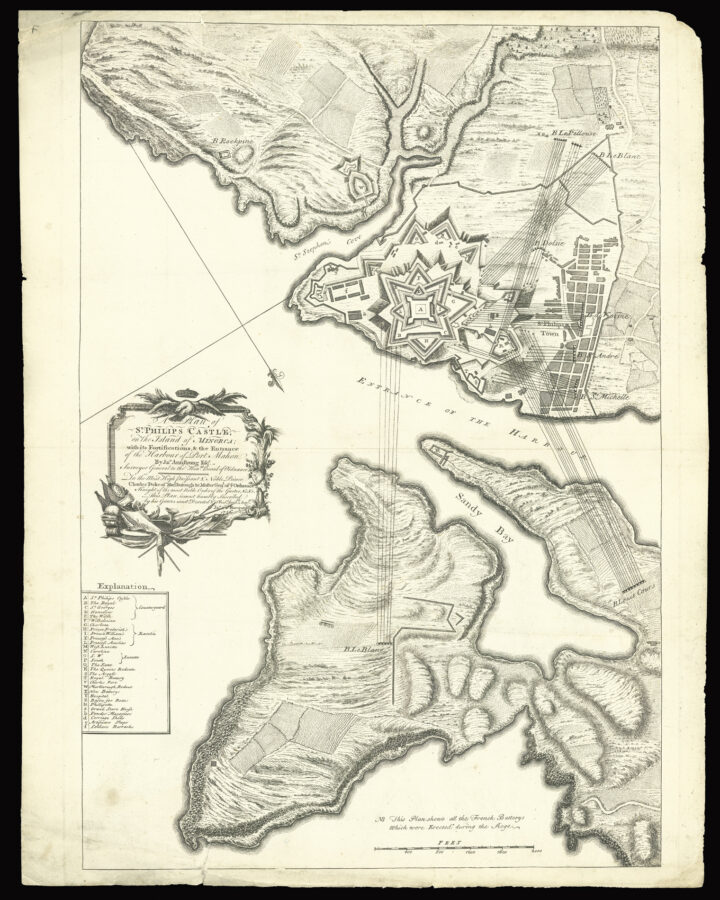 Siege of Fort St Philip on Minorca in 1756

A Plan of St Philips Castle on the Island of Minorca; with its Fortifications and Entrance of the Harbour of Port Mahon By Jno. Armstrong Esq.

Rare separately issued plan of the French Siege of Fort St Philip on Mincorca, during the Seven Years War.

The plan gives a detailed view of the French siege, with the position of the French batteries clearly marked. To the lower left is a key providing information upon the fort’s defences, and prominent buildings, including magazine stores and barracks.

On the 29th April 1756, a French force under the command of the Duke de Richelieu landed on the island and besieged the British garrison at St. Philip’s Castle, forcing them to surrender after a lengthy siege. A British relief force under Admiral John Byng sailed with the purpose of saving the island, but after the naval Battle of Minorca Byng withdrew to Gibraltar, and the resistance of the garrison finally collapsed. Byng was later blamed for the loss of Minorca, and executed by firing squad.

The garrison’s resistance had been considered lengthy and honourable enough for them to be allowed to march out carrying their arms and be shipped back home to Britain, a common convention at the time. Blakeney was absolved of any blame for the loss of the island, and was later awarded an Irish peerage in recognition of his defence of Fort St Phillip.

The present example is the second state (of two) of the plan, with the French battery positions shown, named, and lines of fire marked. Above the scale bar text has been added:

​‘NB. This Plan shew’s all the French Batterys which were Erected during the Siege’.