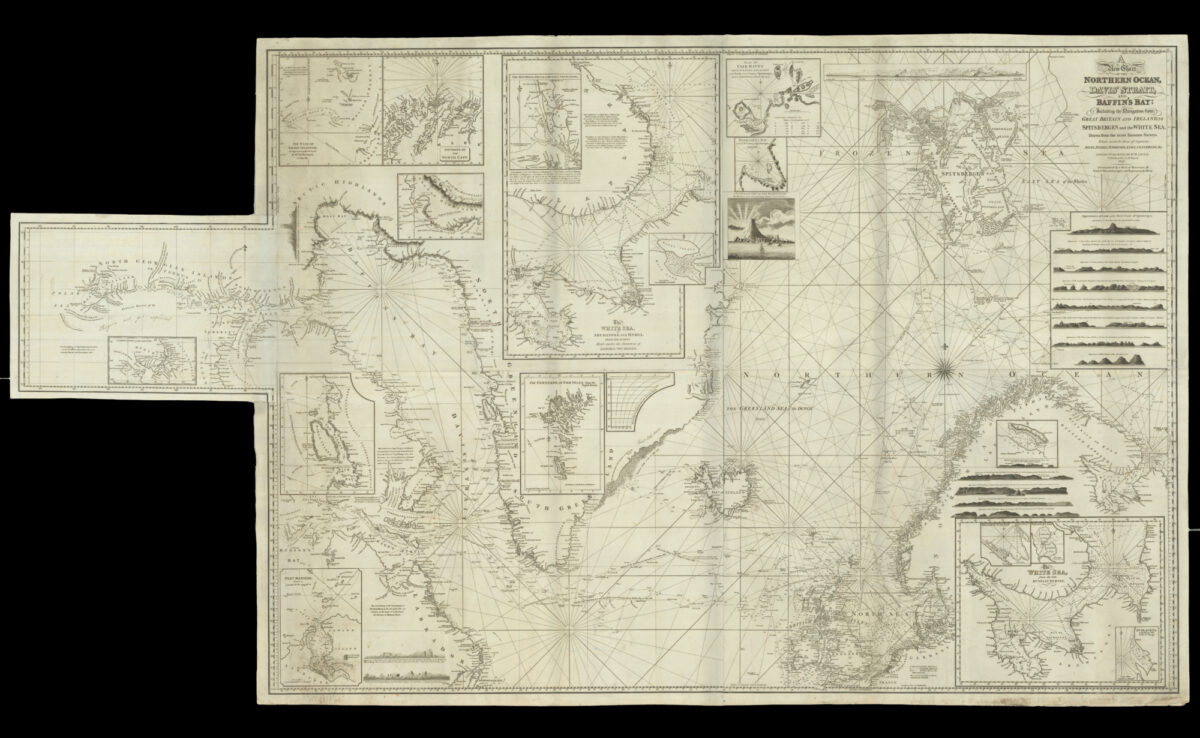 A New Chart of the Northern Ocean, Davis’ Strait, and Baffin’s Bay: Including the Navigation from Great Britain and Ireland, to Spitsbergen and the White Sea. Drawn from the most Accurate Surveys, Which include those of Captains Ross, Parry, Scoresby, Lyon, Clavering &c

A large blue-back chart showing routes from the British Isles to Baffin’s Bay, off the west coast of Greenland, surrounded by over fifteen inset maps and views, and an additional extending flap of the ​‘North Georgian Islands’ alongside ​‘Extensive Barriers of Ice’ in a ​‘Region not yet explored’.

First printed in 1820, issued to accompany a new edition of Purdy’s publication ​‘Memoir descriptive and explanatory to accompany the charts of the northern Atlantic Ocean; and comprising instructions, general and particular for the navigation of that sea’. This is apparently the earliest issue of the chart with the extension showing the ​‘North Georgian Islands’, and scarce as such.

As a young adult, John Purdy (1773–1843) moved to London from Norwich, where in 1795, where he was apprenticed to David Steel, nautical publisher and bookseller. His earliest known charts, of the Channel Islands, date to 1806 and were published by Steel’s widow and successor, Penelope Mason. His earliest of the North Sea were published by Laurie and Whittle, for whom he worked exclusively from 1812 until his death

Purdy’s ​“greatest contribution was to the knowledge of the Atlantic Ocean and the Caribbean Sea. In his ​‘Memoir … to Accompany the New Chart of the Atlantic Ocean’ (1812, with eight editions in his lifetime) he made available to ordinary navigators James Rennell’s work on ocean currents. Rennell had ​‘a high opinion of his talents’, and in 1832 his daughter, Lady Rodd, entrusted Purdy with editing her father’s ​‘Wind and Current Charts’. Purdy’s other works included ​‘Tables of the Positions …’ (1816), to accompany Laurie and Whittle’s ​‘Oriental Navigator’; ​‘The Columbian Navigator’ (1817); and works on the south Atlantic, northern European waters, and the Mediterranean. Most of these went through several editions in his lifetime and continued in print after his death under the editorship of his successor, Alexander George Findlay” (Susanna Fisher for DNB).

With the printed paper label of chartsellers W. Reid & Son on verso