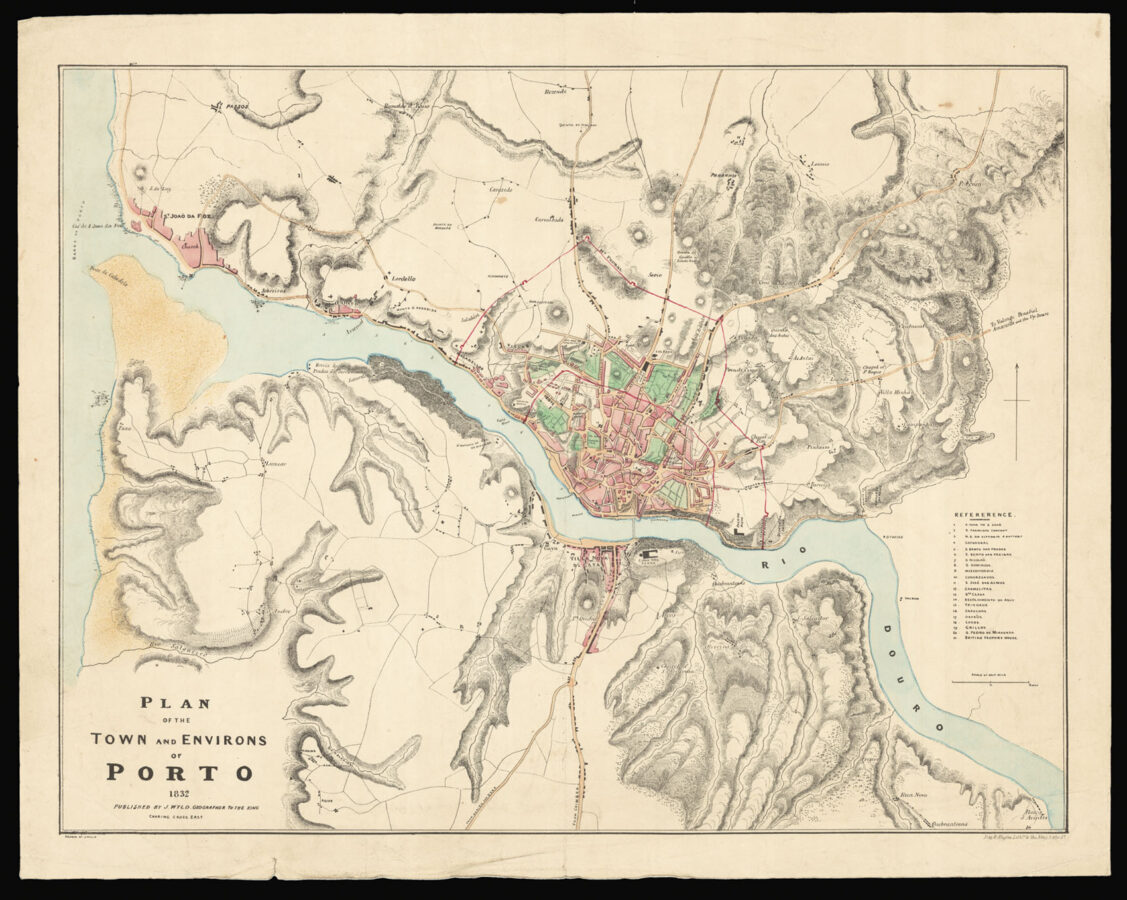 Plan of the Town and Environs of Porto 1832.

This detailed plan of Porto and its environs was published by Wyld to coincide with Britain’s continued involvement in Portuguese affairs. The British had sided throughout the 1820s with the Liberal constitutionalists led by Dom Pedro (Pedro IV) against the Absolutists led by his younger brother Miguel. The British, although not overly concerned with the internal politics of the country, were weary of the outside influence on Portugal by the likes of Austria, Spain, and to a lesser extent France. The tensions between the two Portuguese factions led to the Portuguese Civil War (1828–1832), also known as the Liberal Wars.

By 1832 the forces led by Miguel controlled all of the Portuguese mainland, with the Liberal forces controlling the Azores. On 8 July 1832 a fleet of 60 ships from the Azores led by the British Admiral George Roses Sartorius landed some 7,500 men on the Arnosa de Pampelido beach near Mindelo. The action took the Absolutist forces completely by surprise and they were not able to oppose the landing, nor the occupation of Porto the next day. On 23 July the Liberal Army were able to repulse the Absolutists in the Battle of Ponte Ferreira, but had to fall back on Porto. The Absolutist forces would lay siege to the city for the next 12 months.

The plan itself, on a scale of 3 inches to the statute mile, is superbly detailed with roads, and buildings named and marked, and elevation shown by hachure. A reference key to the right lists 21 prominent buildings and landmarks. Two red lines depict the city’s defensive lines or walls, one surrounding the outer limits and the other the inner core.

James Wyld sr. was apprenticed to William Faden in the Clothworkers’ Company in 1804, and made free in 1811. After his freedom, Wyld seems to have worked as a surveyor and for the Quartermaster General’s Office, the department of the army responsible for publishing maps, being involved in producing maps for use by the British Army in the Peninsula War. This particular war saw the first use of mass lithographic printing for map publishing.

For much of the century the family were the leading English mapmakers and publishers, succeeding Faden as geographer to the King and to the Duke of York, and then by appointment to King William IV and then Queen Victoria. Wyld sr. was one of the founding members of the Royal Geographical Society in August 1830. In the second half of the century they were challenged by Edward Stanford. Under the third James Wyld the firm went into decline, and in 1893 the business acquired by Edward Stanford Ltd.

We are only able to trace one institutional example in the BNF, with the defensive walls marked in red differ somewhat in their placement compared to the present plan.

Scale: 3 inches to one statute mile.