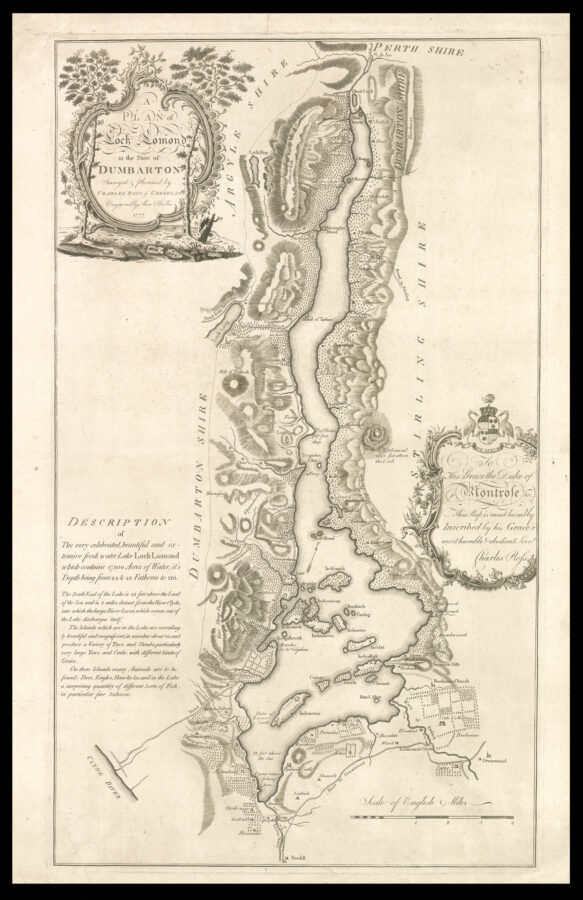 Plan of Loch Lomond in the Shire of Dumbarton Surveyed & Planned by Charles Ross of Greenlaw. Engraved by Alex Baillie 1777. To His Grace the Duke of Montrose &c. This Map is most humbly Inscribed by his Grace’s most humble & obedient serv[ant] Charles Ross.

The career of Charles Ross is typical of many of the land surveyors of Scotland in the second half of the eighteenth century. Originally a factor, he worked as an estate and county map-maker, nurseryman and architect. The author of a guidebook to Loch Lomond, he was also interested in local antiquities. Land surveyors played a significant part in the agricultural changes of the time, particularly in such matter as division of commonties and the move from infield-outfield systems to a more geometrical field pattern.

Ross’s style gives the impression that he was largely self taught. As can be seen in the occasional note, Ross does not merely record the land but gives some indication of its quality, for example, ​“fine sheep pasture”, and ​“great salmon fishing here”.

The map is dedicated to the Duke of Montrose, whose family seat — Buchanan Castle — is clearly marked on the lower right of the plan.

Rare we are only able to trace two institutional examples of the present work: the Bodleian; and the National Library of Scotland.