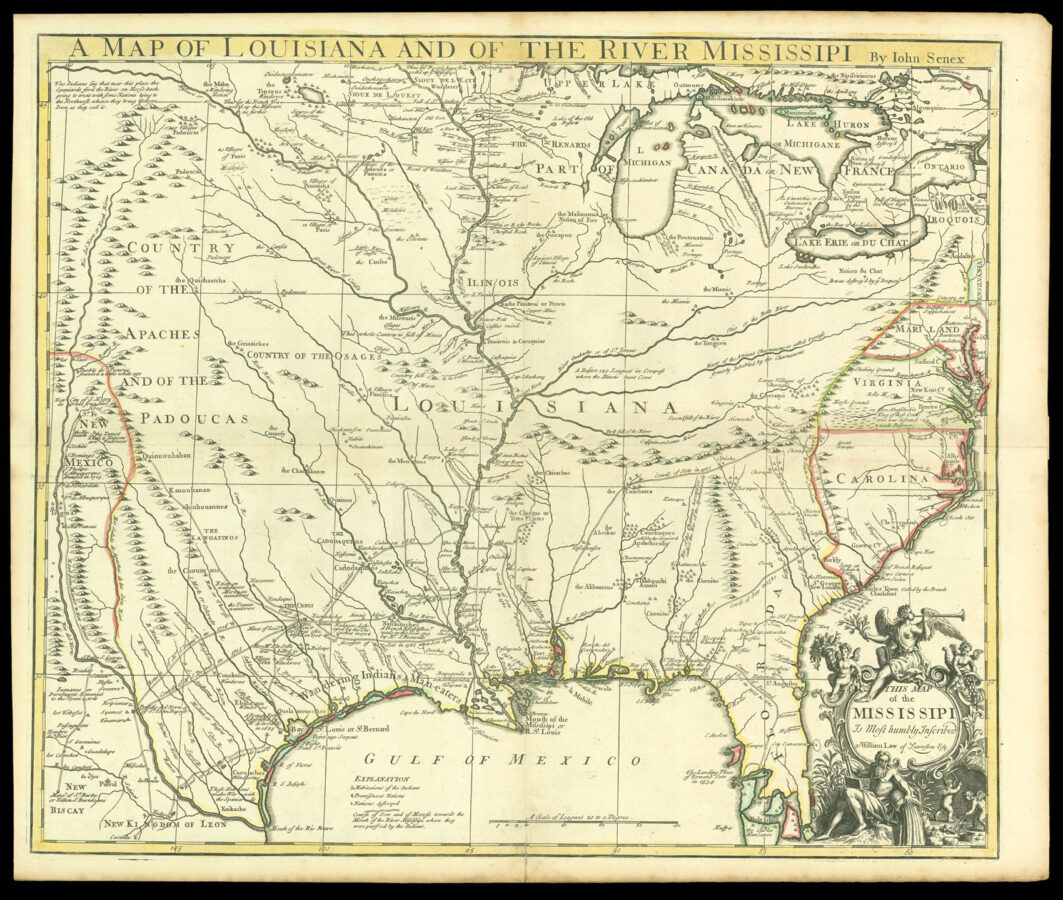 Senex’s rare map of the Mississippi

Map of Louisiana and of the River Mississippi

An important map of Louisiana by John Senex after Guillaume de L’Isle, and ​“the best of the early English maps giving particulars of the West” (Kashnor). It marked the beginning of a cartographic ​‘war’ between the French and English as each tried to substantiate their claims in America, eventually decided in the Seven Years’ War. Senex’s map was ​“the first detailed map of the Gulf region and the Mississippi, the first printed map to show Texas, the first to show the land routes of earlier centuries — De Soto in 1539–40 and his successor Moscoso in 1542, Cavelier in 1687, Tonty in 1702, and the recent route of Denis in 1713 and 1716” (Tooley).

De L’Isle’s map had provided some important updates to cartographic knowledge of America including the first accurate representation of the mouth of the Mississippi, but it also claimed vast swathes of America for the French. Florida is not even named, but included in Louisiana; he described Carolina as belonging to the French by right and possession; and restricted the British colonies to the east of the Applachian Mountains.

Here, Senex restores Florida to the map, and ignores the French claim to Carolina. New Orleans does not appear either. He accurately maps the course of the Mississippi River and its tributaries (the Red, Arkansas and Missouri Rivers) and shows the Niagara Falls, with a note that they are 600 feet high. Senex also shows Texas for the first time following de L’Isle: Mission de las Teijas is marked.

The map is also notable for the detail given of the various Native American nations. The coast of the Gulf of Mexico is ominously marked ​“Wandering Indians and Man-Eaters”. To the North, the ​“Hurons”, ​“Natives of Petnn” and ​“Nation Neutre” are all marked as ​“destroyed”, the latter by the Iroquois.