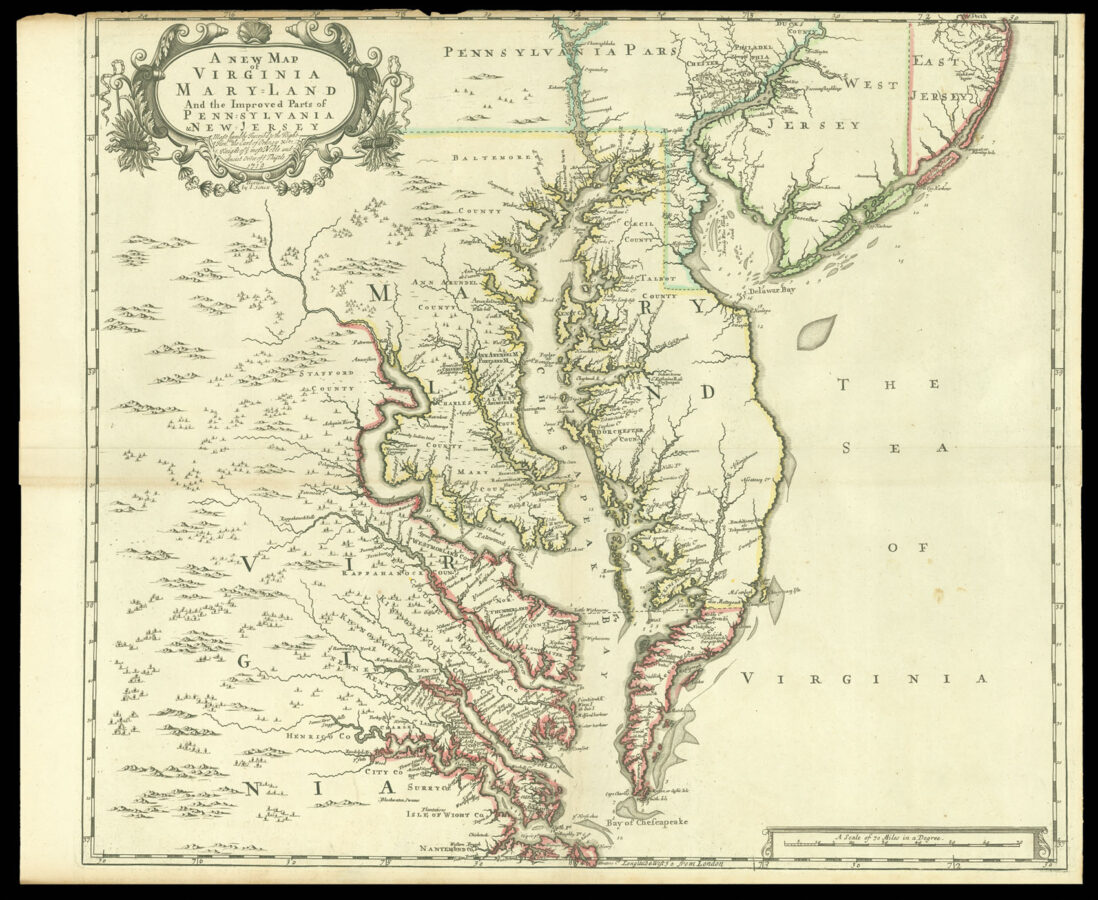 Senex’s map of the Chesapeake Bay

A New Map of Virginia, Maryland and the Improved Parts of Pennsylvania & New Jersey

An important and interesting map of the Chesapeake Bay area by John Senex after Christopher Browne, who in turn derived most of his work from Augustine Hermann’s 1673 map of North America. Senex changed the imprint and republished the map in his 1721 atlas, ​‘A New General Atlas of the World’.

The map is centred on Chesapeake Bay, oriented to the north. This is an early example of a change in maps of America, which were often oriented to the east. It shows Philadelphia, the contemporary boundaries of Maryland and the contemporary division of New Jersey into East and West Jersey. The rivers flowing out of the bay are carefully detailed, as is the Delaware. The concentration of settlements nearby suggest the limits of European settlement, and also indicate the importance of claims to these waterways. The area around the Three Lower Counties (Delaware) was one of the main points of dispute between Lord Baltimore and William Penn. Senex draws the boundary of Delaware to favour Lord Baltimore.

The Calvert family were given title of Lords of Baltimore and the peninsula between the Chesapeake and Delaware Bays, and the land north of the Potomac, by Charles I in 1632. Half a century later, William Penn, the son of Admiral William Penn and an important English Quaker, appealed to Charles II for lands in America for the Quakers, whose presence was causing sectarian tensions in England. Charles II granted Penn a vast body of land from west of New Jersey (which was now already owned by a Quaker group) and north of Maryland. Unfortunately, different interpretations of the terms of the grants created a disagreement over land rights which would rage for nearly a century.

In 1682 William Penn and Lord Baltimore both claimed the Three Lower Counties (Delaware). The Duke of York had granted the area to Penn, but Baltimore argued the claim was invalid because it had been part of Maryland. In 1685 the King in Council ruled in favour of Penn, but Baltimore continued to petition against the ruling until 1709. The disagreement meant that Penn could not collect rent and settlers would not pay for land until the dispute was resolved.

Senex’s map therefore shows a highly contentious area and is a fascinating example of the influence of cartography in the land claim process. For example, the placement of Cape Henelopen (Disappearing Cape) was contentious; older maps had placed it 25 miles further south then it actually was, meaning that Baltimore lost land. Even when a map was drawn up to commemorate an agreement between Baltimore and Penn, they could not agree on the type of miles to be used on the scale.

John Senex was later commissioned to create and publish the map which accompanied the Articles of Agreement between Lord Baltimore and the Penn Family in 1732, and subsequently reused for the contract of the Mason-Dixon Line in 1763.

The map is dedicated to George Hamilton, 1st Earl of Orkney, who was made the Governor of Virginia in the early eighteenth century as a lucrative sinecure, never actually visiting the colony himself.