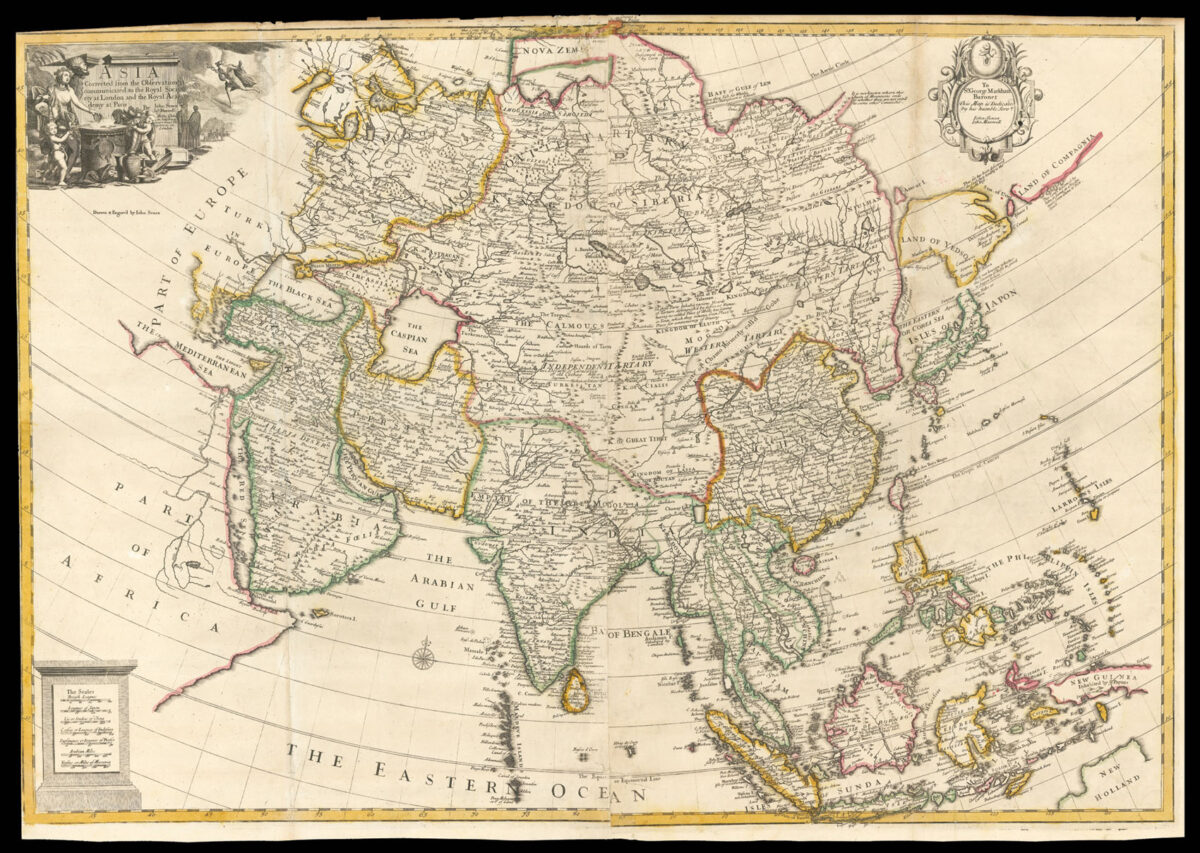 Asia Corrected from the Observations Communicated to the Royal Society at London and the Royal Academy at Paris.

An intriguing map of Asia, including Manila and the Philippines. The decorative title cartouche is surrounded by classical deities, including Venus and Mercury, with a putto holding a cornucopia symbolising the riches of the continent. The map itself is remarkable for showing an early outline of the north coast of Australia, named ​“New Holland” here. The imaginary lands of Yedso and Compagnia (supposedly ​“discovered by John de Gama on a voyage made from China to New Spain”) are shown in incomplete outline in the north Pacific above Japan. European explorers believed that the inhabitants of Yedso ate with utensils made of gold and silver. These are distorted versions of actual discoveries made by Maarten de Vries and Cornelis Jansz Coen in 1643; they roughly correspond to Hokkaido and Iturup in the Kuril Islands. The map shows Novaya Zembla as a peninsula bent over eastern Europe, and on the west coast of Siberia, a mountain range extends into the Pacific, an imaginary addition which often appears in eighteenth century maps. This is a relic of Peter the Great’s efforts to find a northeast passage: an expedition during his reign headed by Semen Ivanovich Dezhnyov found a peninsula covered with mountains which they surmised could be sailed around to reach Asia. Senex notes beside it that ​“It is not know whether this chain of mountains ends or whether they are not joined to some other continent”.

Although Tibet is almost blank, it is identified as the ​“K[ingdom] of Great Tibet”; Korea appears, although it is rather misshapen.The imaginary Lake of Chiamay appears in Assam, in the east of India. European cartographers believed that there must be a major water source in the area to feed the Irrawaddy, Dharla, Chao Phraya and Brahmaputra river systems, based perhaps on the work of Portuguese scholar Jao de Barros. It disappeared from maps a few decades later.

A fascinating perspective on the changing European geography of Asia. Although there are multiple institutional copies, we have only been able to trace one other copy appearing at auction.