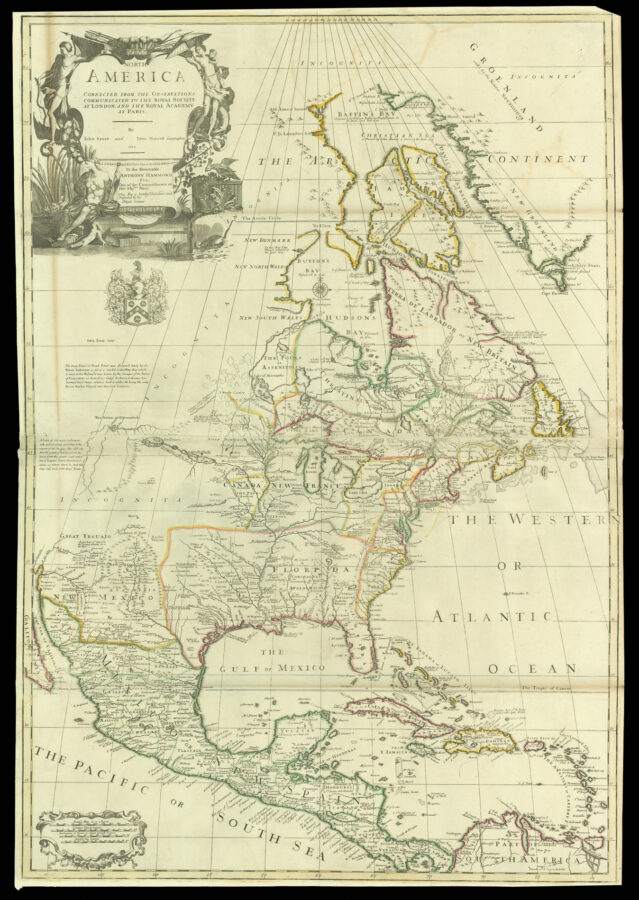 North America Corrected from the Observations Communicated to the Royal Society at London and the Royal Academy at Paris.

The first state of Senex’s influential map of North America was the most ambitious attempt to map the continent to date, covering everything from the Arctic Circle to Panama and the Spanish Main. It is modelled after two maps by Claude and Guillaume de L’Isle: ​‘Carte du Mexique et de la Floride’ (from which Senex took the position of the mouth of the Mississippi and parts of the south) and ​‘Carte de Canada ou de la Nouvelle France’, although its boundaries extend further than either. This map represents a breakthrough in British cartography of America. It was the first time that new cartographic ideas about North America espoused by De L’Isle — including the supposed explorations of the Baron Lahonton, California as a peninsula, and the Great Lakes — were published in Britain. It was published first as a loose map and then included in Senex’s 1714 atlas.

For an English map, it is surprising that Senex yields so much territory to the French. Senex followed de L’Isle so closely that the map shows the French controlling territory stretching from the St Lawrence River to Florida and the Rio Grande, the entire Mississippi Valley, the Great Lakes, and all of modern Texas and Florida. Spanish and British claims are superseded by this vast French territory. However, the detail of de L’Isle’s cartography meant that Senex was able to show the separate islands of the Hudson Bay Area, previously shown as a single mass. The mapping of Canada north of Lake Superior is after Jean Baptiste Louis Franquelin. Lake Nipigon is mapped correctly, but two additional lakes and a channel are used to connect the lake to James Bay, probably representing the Albany River. The Albany had been explored by French missionaries who established the St. Ann Mission there, shown as a fort by de L’Isle to consolidate the French claim to the river and superseding Fort Albany, constructed by the Hudson Bay Company. Senex has chosen to show California halfway off the printed border of the map, leaving it open to interpretation as to whether it is an island or peninsula rather than taking a side in the debate.

The lure of American gold permeates the map, with Senex identifying three of the seven mythical ​‘Cities of Gold’: Teguayo, Cibola and Quivira. Cibola and Quivira were found by the Coronado expedition, and although both were found to be fertile and prosperous, neither was full of treasure. The myth of Teguayo survived rather longer, with the assistance of the deposed governor of New Mexico, the Count of Penalosa, who perpetuated the stories of its wealth throughout Europe. The Spanish wreck discovered by Sir William Phips off the coast of Caicos is also shown. Phips retrieved nearly £300,000 worth of treasure, sparking a wave of copycat expeditions, and its inclusion reflects how the idea of the treasure fleets captured the public imagination.

The map includes de L’Isle’s portrayal of the explorations of Baron Louis Armand de Lahonton (1666–1715). Lahonton was a French military officer in charge of Fort St. Joseph in modern day Michigan. With the help of local Chippewa tribes, Lahonton apparently explored the majority of the Upper Mississippi Valley, and his findings are shown in the form of a series of lakes and rivers west of the Mississippi, filling the hitherto unexplored territories north of new Mexico. He published a book on his return to Europe describing his travels, which prompted the addition of his ​‘discoveries’, especially the Longue River, to many of the most important works in contemporary cartography. The French and British were particularly excited by the propsect of an inland passage to the Pacific. Senex does not give total credence to Lahonton’s work though, observing in an inscription that they are included as true ​“unless the Baron Lahontan has invented these things, which is hard to resolve he being the only person that has travel’d into these vast countries.“

The map is dedicated to Anthony Hammond, a naval commissioner and MP whose crest appears in the title cartouche. Unfortunately, any hopes Senex might have had of gaining influence from such a patron were dashed when Hammond lost his seat in 1708, and then through various financial peccadilloes eventually dying in the Fleet Debtor’s Prison.