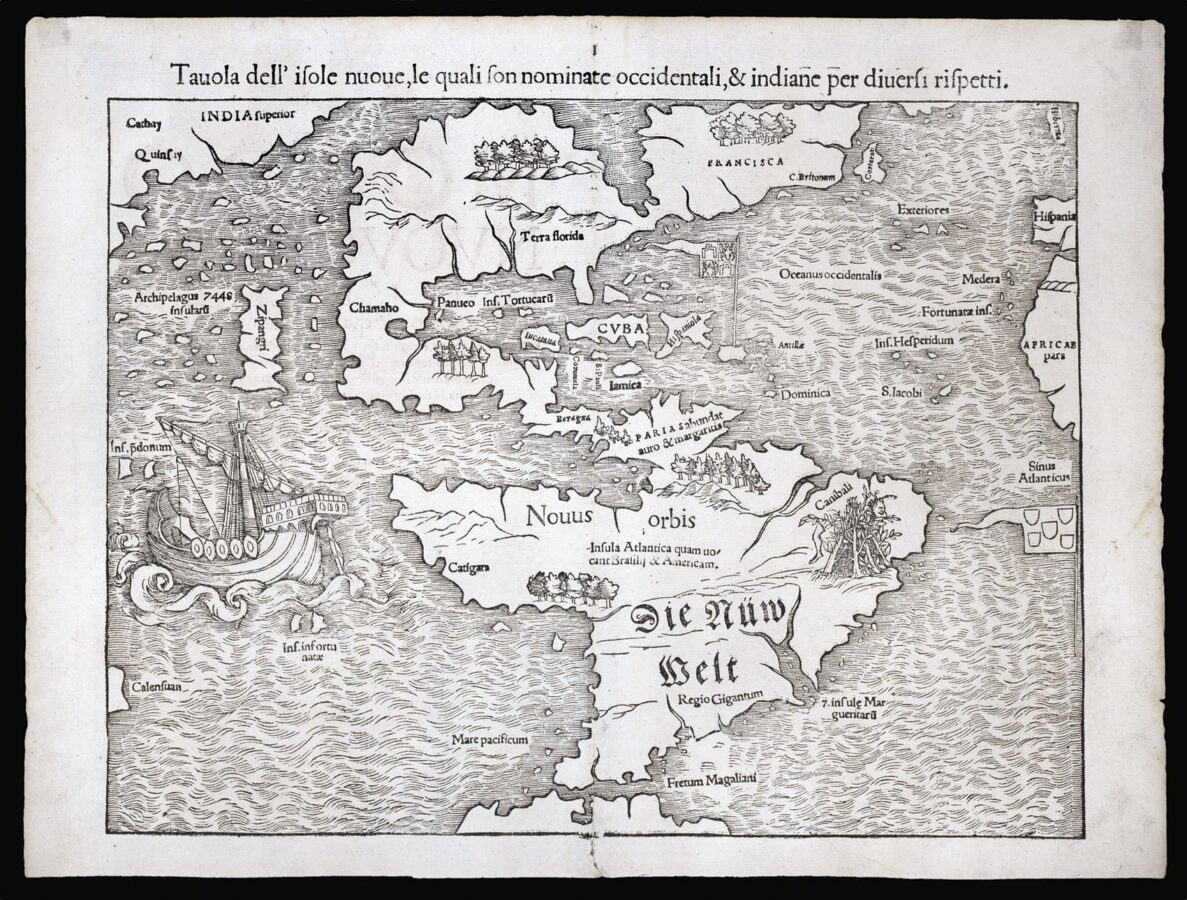 Munster first published his map of the Americas in a 1540 edition of Ptolemy’s ​‘Geographia’, and then in his own ​‘Cosmographia Universalis’ of 1544. The present example is in the eighth state, found in the Italian edtion, first published in 1558, and then unchanged, from remaining stock, in 1571 and 1575. His depiction of North America was determined by the reports of Giovanni da Verrazano, who explored the eastern seaboard in 1524 in search of a passage to Asia. Because Verrazano mistook the Outer Banks, just off the Carolina coast, to be an isthmus separating the Atlantic Ocean from the China Sea, Münster depicted the mid-Atlantic coast of North America as a narrow isthmus, offsetting the Northeast and creating a huge sea in Canada. The origin of this error is a letter written by Verrazano during his voyage up the East Coast, dated the 8th of July, 1524:

”…where was found an isthmus a mile in width and about 200 long, in which, from the ship, was seen the oriental sea between the west and north. Which is the one, without doubt, which goes about the extremity of India, China and Cathay. We navigated along the said isthmus with the continual hope of finding some strait or true promontory at which the land would end toward the north in order to be able to penetrate to those blessed shores of Cathay …“

In South America, the phrase ​“Insula Atlātica quam vocant Brasilii & Americam” identifies America as the lost Platonic island/​continent of Atlantis. In the Atlantic Ocean, Münster correctly locates a Spanish and a Portugese standard, reflecting the division of the unknown world in two by the Treaty of Tordesillas (1494). The Yucatan appears as an island, since its recorded European discovery was by sea, not through Central America.
Münster’s maps of America, and of the world, are the first to use the term ​“Pacific Ocean” (“Mare Pacificum”). The large island off the California, ​“Zipangri”, is Japan, still known only from Marco Polo, who had been told about it from his Chinese hosts but who had never been there. The galleon is Magellan’s ship ​‘Victoria’, and the ​“Unfortunate Islands” near it are the first islands his crew passed on their Pacific crossing, where despite their desperate situation they were unable to get supplies.

As Thomas Suarez reports, Münster, cosmographer, humanist, theologian and linguist, was famous in his own age as a Hebraist, composing a Hebrew grammar and a list of Hebrew, Latin and Greek synonyms which were used widely by sixteenth-century humanists. A Franciscan friar from around 1506, Münster studied in Tübingen and taught in Basel and Heidelberg before leaving the order and moving to Basel in 1529, where he took up the chair in Hebrew. Whilst in Basel, Münster indulged in his other great love: cartography. The love affair had begun some years earlier in Tübingen, when under the tutelage of Johann Stöffler. Münster’s notebook of the time contains some 43 manuscript maps, most of which were based upon others’ work, except, that is, for his map of the Rhine from Basle to Neuss.
Münster would produce his first map in a printed broadsheet of 1525. The map, which covers Germany, also came with an explanatory text (only extant in the second edition of 1528), which lays out Münster’s vision for a new great survey of Germany. He readily conceded that the job was too great for one man and so called upon fellow academics to cooperate and supply detailed maps and text of their respective areas, with Münster working as the great synthesiser. Although the project would never get off the ground, much of its methodology and material would be used, with great success, in his ​‘Cosmographia’.
Throughout the next decade he produced, and had a hand in, several important works that would cement his reputation as one of the leading cartographers of his day; these included, among others, Johann Honter’s celestial charts (1532), his own Mappa Europae (1536), and Aegidius Tschudi’s map of Switzerland (1538). In 1540, he published his edition of Ptolemy’s ​‘Geographia’, which contained not only new maps of Germany and the Low Countries, but also, for the first time, a set of maps of the four continents.
In 1544, Münster produced his greatest work, the ​‘Cosmographia’. It was the culmination of a lifetime’s study, in which he distilled the geographical information he had gathered over the past 30 years.
Münster organises the work in a series of periegesis or geographical travels. He begins by describing the area’s geography, history, ethnography, flora and fauna, and, famously, strange peoples, fabulous plants, and wondrous events.
The work would prove to be so popular that some 40 editions were published between 1544 and 1628, with the number of maps expanding from 26 in the 1544 to 262 by 1628. Its huge popularity would not only — as Burden states — ​“seal the fate of America as the name of the New World”, but would form the basis of general knowledge of many other parts of the world as well.