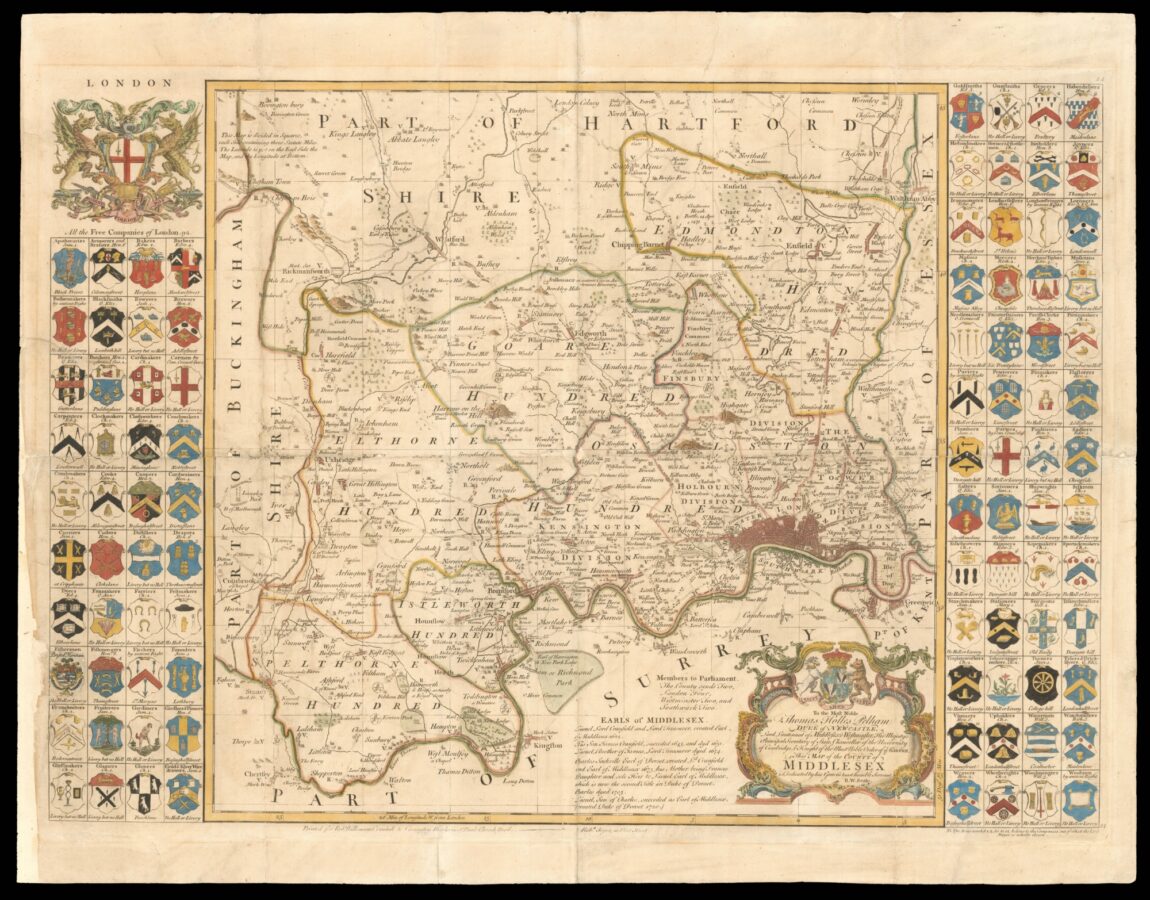 To the Most Noble Thomas Holles Pelham Duke of Newcastle Lord Lieutenant of Middlesex & Westminster, His Majesty’s Principal Secretary of State, Chancellor of the University of Cambridge, & Knight of the Most Noble Order of ye Garter. This Map of the Couny of Middlesex is Dedicated by his Grace’s most humble servant R.W. Seale

This large engraved map depicts the county of Middlesex, divided into administrative divisions, each distinguished by its bold colour outline. The main image is flanked by the heraldic crests of the 92 London livery companies, listed here alphabetically rather than in the customary order based on economic and political power. Above these, in the upper left corner sits the English coat-of-arms. An elaborate cartouche in the lower right corner of the map contains the dedication to the 1st Duke of Newcastle, Thomas Pelham-Holles, and is surmounted by his own coat-of-arms, complete with a horse and bear on either side. Pelham-Holles was Prime Minister from 1757 to 1762, but this map celebrates his authority in Middlesex as Lord-Lieutenant of the county, a role he was awarded by King George I as thanks for the support that Pelham-Holles had helped raise for the new monarch. He was ruthless in ridding his county of Jacobitism, and is recorded to have arrested over 800 people on suspicion of rebellious activity. Pelham-Holles is also known to have had a great talent for maintaining his power through the patronage system, which may provide a clue as to why this map is so flamboyantly dedicated to him.

The engraver, Richard Seale, produced a large number of maps, most prominently those in Bowen’s ​‘Large English Atlas’, a compilation of large-scale maps of all the English and Welsh counties. Alongside the labelled and illustrated representations of urban buildings, churches roads, hills and parklands, his maps also provide additional economic, historical and geographical details about the county. This map, for example, describes the genealogy of the Earls of Middlesex, and records the number of Members of Parliament sent from each district. All the maps in the atlas were available as separate sheets, and Middlesex was particularly popular as an independent map, no doubt because liverymen could make much use of the information contained along its borders. Another attractive feature is the sprawling mass of buildings in the lower right corner which represent London. The margins of the map give the longitude and latitude in minutes, and in the upper left corner, Seale has included some information on how to read it. In addition to the administrative and navigational uses, it is evident that this map was also designed with an ornamental purpose in mind, as shown by its boldly coloured and elaborate features.