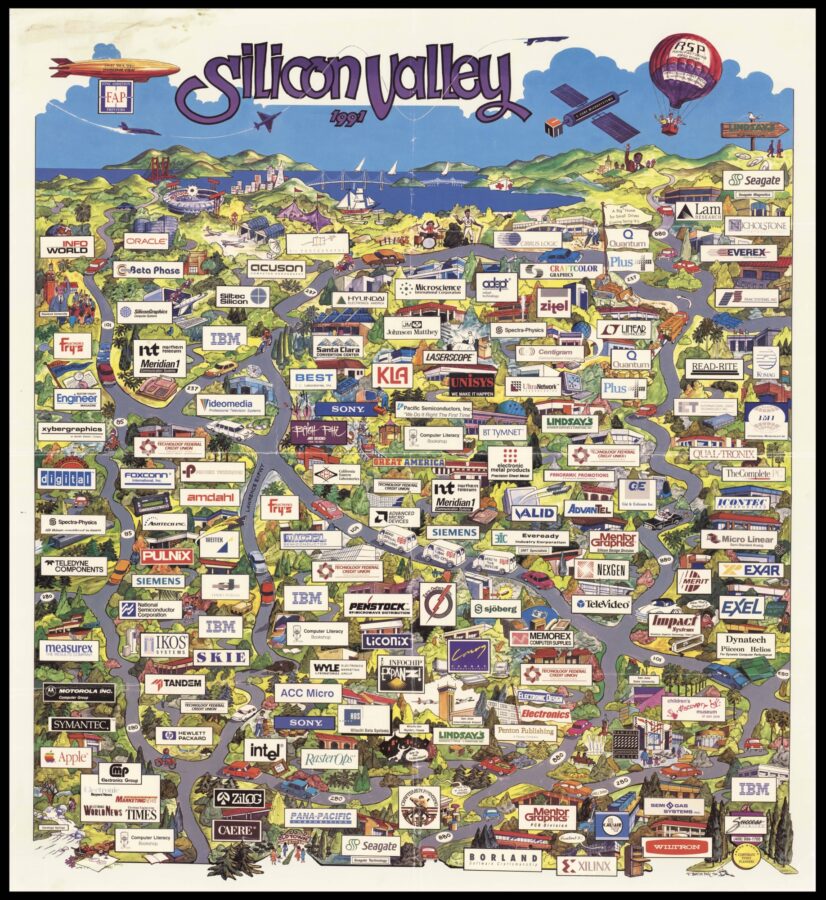 An entertaining pictorial map poster showing silicon valley in 1991, at the dawn of the internet age.

This poster was created as a marketing tool for Seagate Technology, a company based in Cupertino that specialises in data storage hardware. Seagate was founded in 1978 by Al Shugart and partners. In 1980, they released their first hard disc drive, the ST-506. Their product was a hit, and they soon secured the contract to produce disc drives for IBM’s newest microcomputer, the IBM XT, the first personal computer with a built in hard disk. 1991 was a seminal year for the company, marking the return of Al Shugart as CEO and the release of their most popular product line, the Barracuda HDD, the first drive with a 7200 rpm speed. Since then, Seagate has remained at the forefront of the hard drive market by continuing to adapt their products to an ever improving and changing market, as well as through the acquisition of competitors.

We have been unable to find any additional information about this poster’s artist, P. Bach Phi Art Studio, besides noting that they have included their studio’s location and telephone number in the map. However, Gist and Erdmann and Panoramic Productions, whose names are in the imprint, are both still in business. Gist and Erdmann provides advertising and marketing across all media for technology companies, while Panoramic Productions produces film and video content for corporate communications.

This copy has been trimmed along its lower edge, and is therefore lacking Seagate’s logo, the imprint, and a calendar for 1991. This is due to the ephemeral nature of promotional posters such as this. Apparently, once 1992 came around and the calendar was obsolete, the owner decided to cut the calendar off rather than throwing the entire poster out. They must have really like the map!