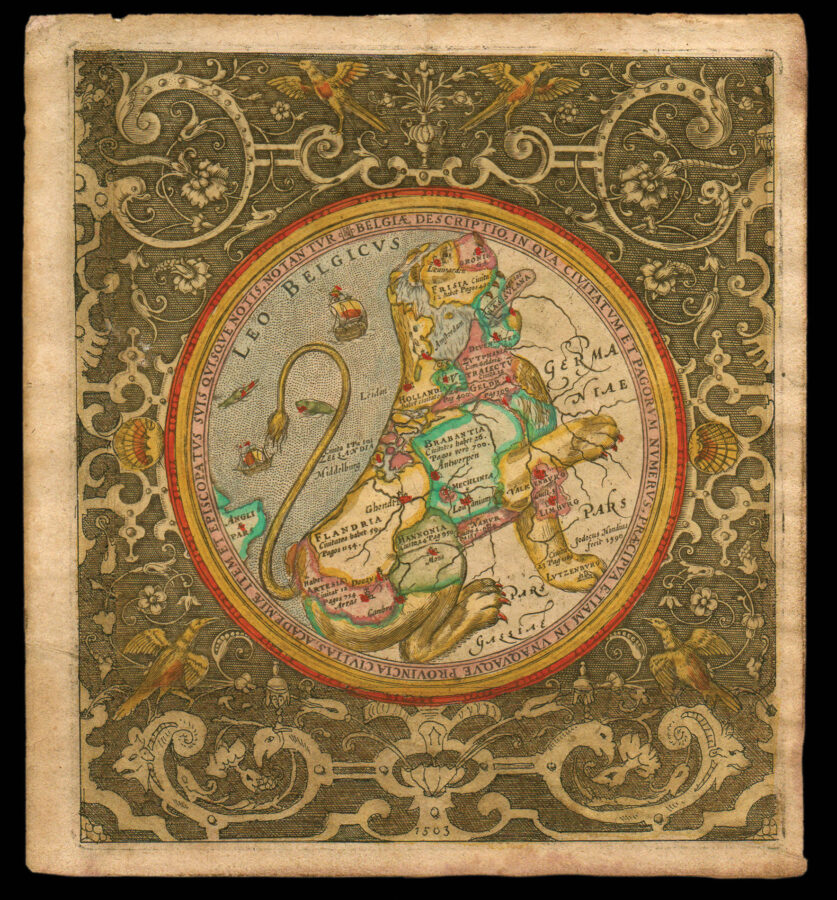 A very scarce copy of Jodocus Hondius’ roundel Leo Belgicus. It is one of a set of five roundel maps Hondius produced while in London in 1590 (“Jodocus Hondius fecit 1590” is visible next to the lion’s left forepaw). Hondius may have borrowed the idea of putting the Leo Belgicus in a round frame from Michael von Aitzing’s title page for ​‘Niederlandische Beschreibung’ (van der Heijden, 2.1). When he moved back to Amsterdam in 1593, he reissued the maps with highly decorative borders, possibly engraving them himself. The design for the borders was taken from a print of Venus and Cupid by Adriaen Collaert, from a series of prints produced between 1560 and 1618 (Schilder).

Complete sets of all five maps are incredibly rare, and copies of the individual maps only slightly less so. There are only two institutional copies of this 1593 edition of the Leo Belgicus roundel, in the Biblioteca Nacional, Madrid and in the Amsterdam Municipal Archives; another in Hamburg was destroyed during the Second World War (Schilder). The copy held in the Yale University Library is the 1602 edition by William Kip and Jan Woutneel, which does not retain either the decorative border or Hondius’ inscription by the lion’s paw (van der Heijden, ​“Een onbekende Leo Belgicus”).