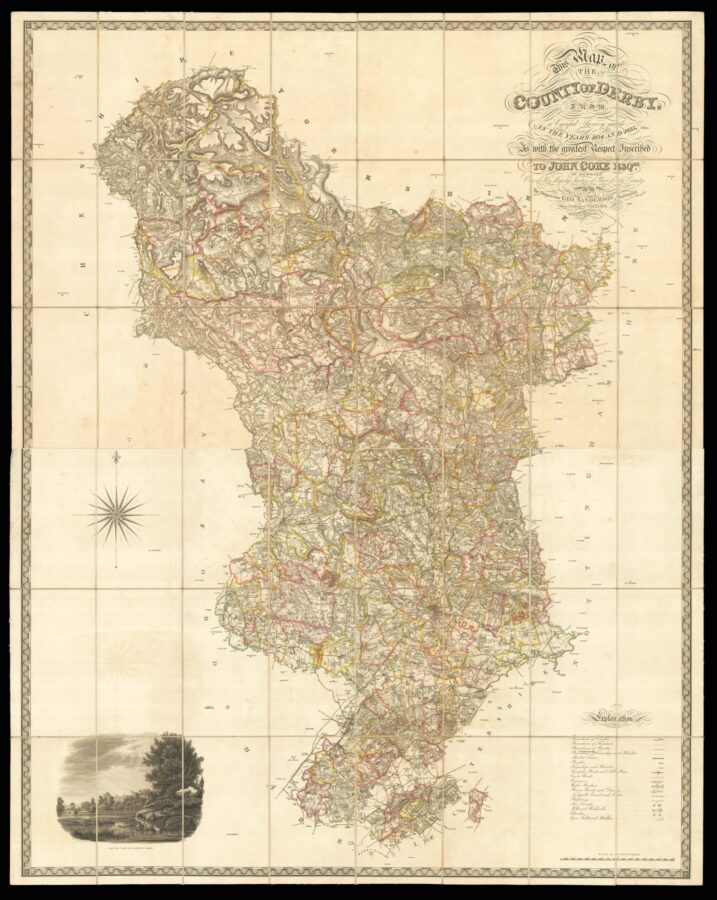 [Derbyshire] This map of the County of Derby from a Careful Survey made in the years 1834 and 1835, is with the greatest respect inscribed to John Coke Esqre. Of Debdale, One of His Majesty’s Justices of Peace for the County.

As communications began to improve during the nineteenth century, so did the demand for more detailed county maps. This map of Derbyshire from 1836 is a valuable source of information about the changes that occurred across Britain throughout this period. It presents the railroads and canals, newly enclosed fields, and increasingly urbanised landscape that came to characterise British cartography during the Industrial Revolution. The South portion of the map includes a key listing such features, including parishes, towns, markets, roads, canals, railways, fields, churches, hills and windmills. These are represented precisely on the image itself, with relief expressed by hachures and individual administrative regions distinguished by colour. This delineation became particularly important in the aftermath of the 1834 Poor Law Amendment Act, which specified the responsibilities of parish towards its poor population and introduced the infamous workhouse. Political reforms throughout the 1830s also made numerous changes to borough boundaries to improve the voting system, and so this map is of great use in tracking these changes.

The cartographer, George Sanderson, produced multiple maps representing the transformed British landscape, charting the reconfigured counties of Derbyshire and Nottingham in particular detail. The prominent London engravers, J & C Walker, were similarly well-known for producing maps which presented the new administrative lay-outs of the counties, providing essential insight into the evolution of British geography, history and politics. The dedication to John Coke, a Justice of the Peace, also points towards the significance of social reform at the time; Coke sat on the board of the Mansfield Poor Law Union, and advocated for financial relief, stability and education for his poor parishioners.

The image is encased by a decorative border which identifies the lines of longitude and latitude. The hugely elaborate title dominates the upper right corner, naming the cartographer, engraver and dedication. On the South portion of the map, along with the compass and key, there is a vignette of Haddon Hall, a fortified medieval manor house preserved from the 12th century, and owned by the Duke of Rutland. The building held an important administrative and cultural place within the county. 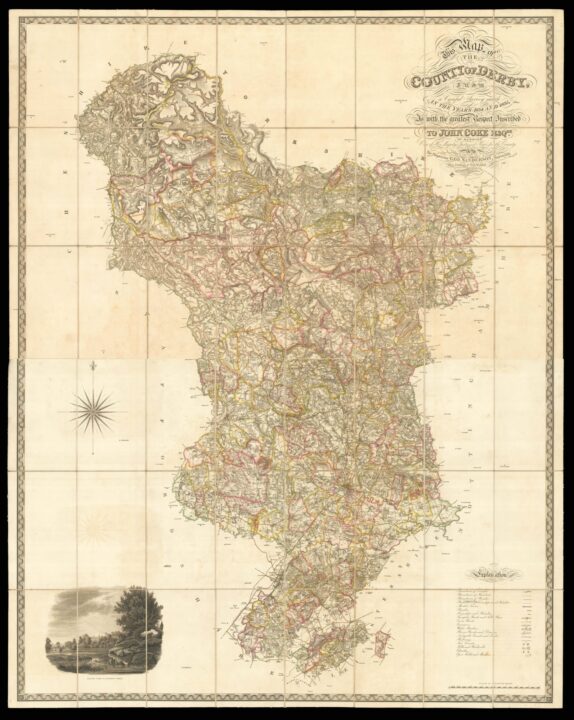