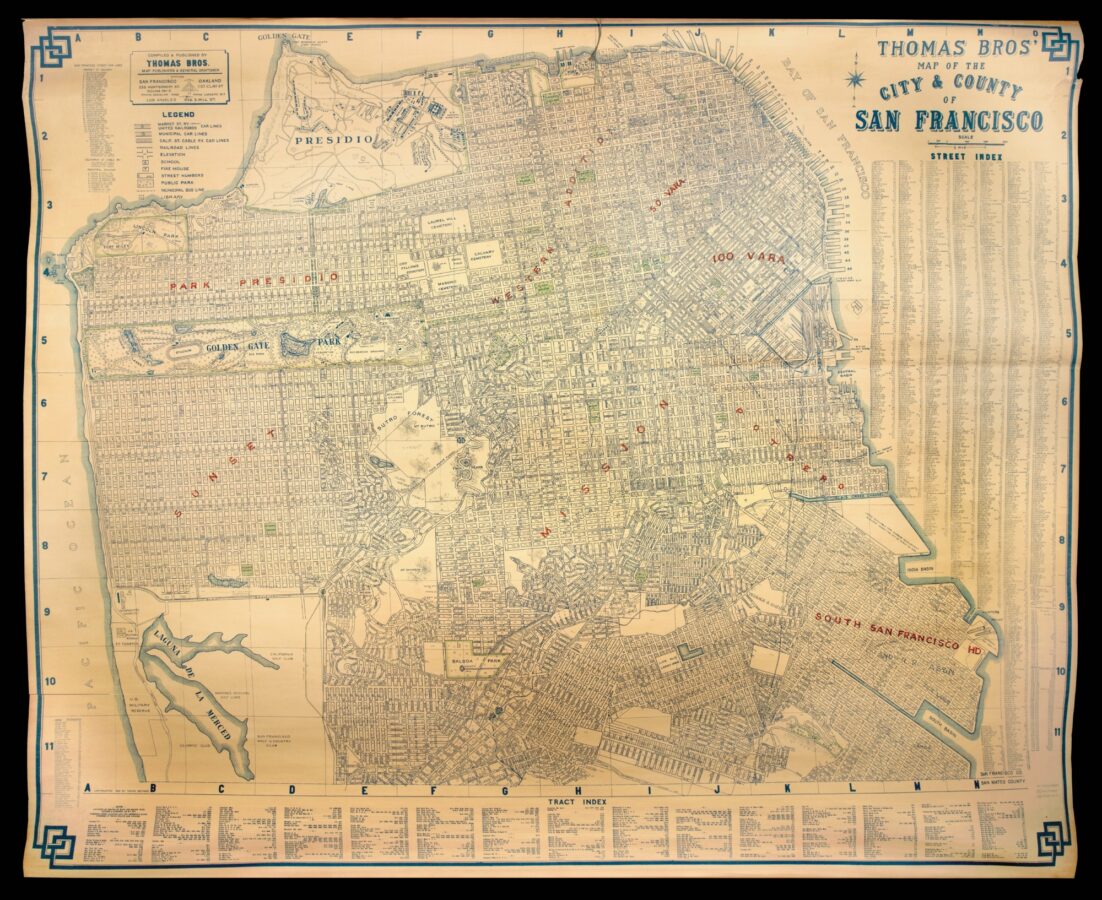 Thomas Bros’ Map of the City & County of San Francisco.

A monumental map of San Francisco, at the height of its post-fire pre-depression era development, the vision of the chief engineer Michael Maurice O’Shaughnessy (1864–1934), who modernised the infrastructure of San Francisco and who is revered as one of the most important civil engineers in American history. After the devastating earthquake and fire of 1906, San Francisco underwent an intense period of reconstruction and development, which culminated in the city as the Thomas Brothers’ map shows it. A year later, in 1927, construction began on San Francisco airport, on Mills Fields, 13 miles south in San Mateo County, making it a truly international city.
The city is limited by its natural boundaries with the Pacific Ocean, and San Francisco Bay on three sides, and the border with San Mateo County to the south. Included on the map are a ​‘Street index’, ​‘Tract Index’, ​‘Legend’, ​‘San Francisco Street Car Lines’, including all stops for the ​‘Market Street Railway’, ​‘California St. Cable RY.’, ​‘Municipal Railway’, and a list of the ​‘New Streets’ in the newly developed southwest portion of the City, adjacent to California and San Francisco Golf Clubs at Laguna de la Merced.
In 1912, the then mayor of San Francisco, James Rolph, persuaded O’Shaughnessy to take the post of chief engineer for the city, a position which he held for the next twenty years. ​“The tasks he faced were challenging, the more so as he could have made much more money in the private sector. O’Shaughnessy, whose long-term view of the city’s infrastructure included much more than its water supply [which had been his previous concern], felt that San Francisco’s public transportation network should be a single system providing uniform service at a reasonable price throughout the city. The transportation system could be used to encourage growth in given areas through construction of new lines ahead of residential development. Careful design of the system would produce cost-effectiveness. O’Shaughnessy thus supervised the expansion of the city’s streetcar system by building new lines into areas with no previous service, using funds derived from operating income and by assessing properties along the right-of-way. Between 1915 and 1927 O’Shaughnessy created the municipal streetcar system that formed the basis of San Francisco’s future public transportation network. In addition to modernizing the railway system, O’Shaughnessy supervised a new fire system, sewers, streets, highways, bridges, and tunnels. Much of this construction was done over the areas destroyed by the 1906 earthquake and fire. Under his leadership the city built a main sewer line under Golden Gate Park to the Pacific Ocean. All of these accomplishments, however, paled before the challenge of the construction of the city’s water-supply system from the Hetch Hetchy Valley” (Abraham Hoffman for ANB).
The Thomas Bros., publishing firm was founded by cartographer George Coupland Thomas and his two brothers in Oakland, California, in 1915. They published the popular ​‘Thomas Guide’, which was not only useful for tourists, but indispensable to the government and emergency services, who would refer to the ​‘Thomas Guide’ page number and map grid in dispatches. They published many other maps and atlases until 1999 when they were acquired by Rand McNally.
Rare: not in Rumsey; while OCLC records other maps with this title published by the Thomas Bros., company from 1922 to 1946, all are much smaller folding maps.
List of ​‘New Streets’: Aerial Way, Agnon Ave., Aloho Ave., Benton Ave., Brentwood Ave., Cascade Way, Colonial Way, Cecilia Ave, Cragmount Way, Delmote St., El Verano Way, Fanning Way, Genebern Av. [sic], Grant Way, Harding Blvd., Justin Dr., Lurline St., Lomita Av., Loyola Terrace, Mandaly Lane, Manor Drive, Mantucket Ave., Miroloma Drive, Mount Lane, Mt. Davidson Way, Murray Av., North Gave Dr., Oriole Way, Ortega Way, Pilgrim Ave., Pinehurst Way, Radio Terrace, Rock Ridge Drive, Roosevelt Way, Rudden Av, San Andres Way, San Jacinto Way, St. Elmo Ave., Southern Heights Av., Upland Drive, Westgate Drive, Wilson, fmly Bismark.