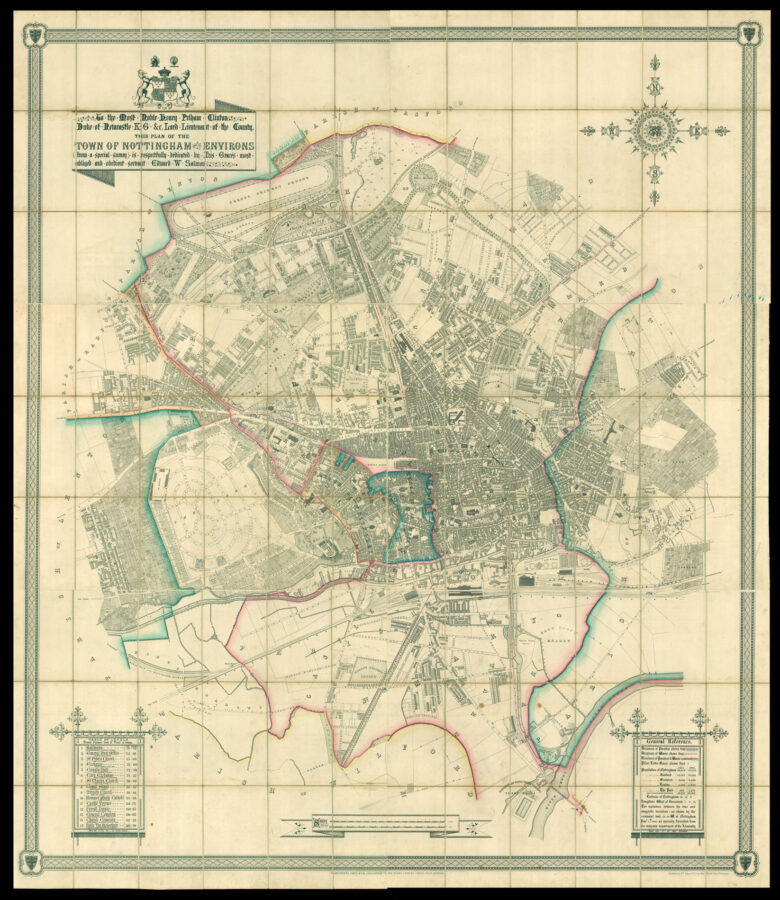 A highly detailed town plan of Nottingham. Nottingham was a flourishing city in the mid-nineteenth century, bolstered by the Industrial Revolution. The first lace machines had been brought to the city in 1809, and it was soon the centre of British lace manufacturing. Unfortunately, the rapid expansion of population required to support this industrial expansion created huge swathes of slums, known as the worst in the British Empire. After the local landowner, the Duke of Newcastle, refused to endorse the Reform Act in 1831, inhabitants of these slums rioted and burned Nottingham Castle, the ruins of which are visible on the map. Nottingham was considerably wealthier and more peaceful by the time this map was made.

There is a dedication to Henry Pelham-Clinton, 5th Duke of Newcastle, under his coat-of-arms. Pelham-Clinton was a prominent Tory and then Peelite politician, holding government posts under Lord Palmerston and Lord Aberdeen, and was Lord Lieutenant of Nottingham. He would die only two years after this map was published, after a life fraught with scandal: his friend, William Gladstone, called him ​“the unfortunate duke”. His wife, Lady Susan Hamilton, eloped to Italy with Horatio Walpole after a string of affairs, including one with his own brother. His son, Lord Arthur Pelham-Clinton, died in mysterious circumstances after being charged in connection with the Boulton and Park case, a contemporary cross-dressing scandal.