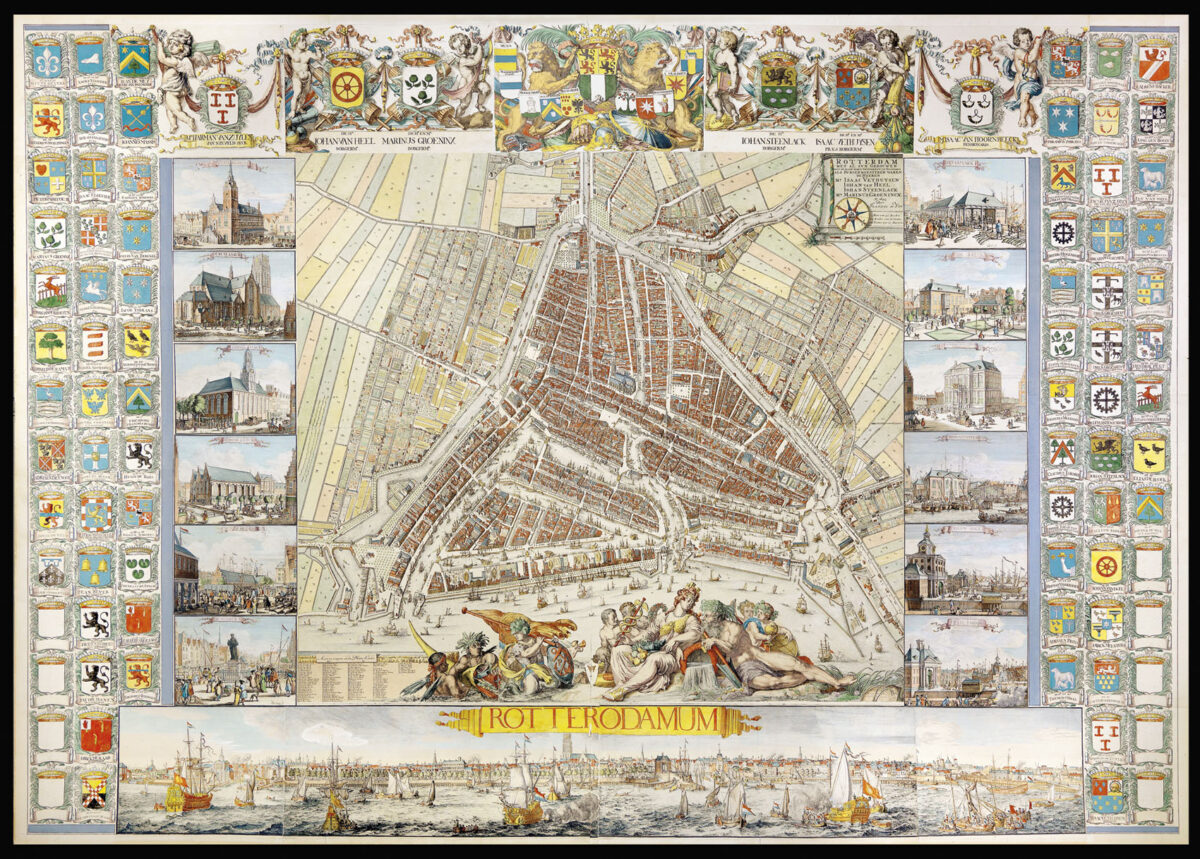 The celebrated ​‘Atlas de Vou’, the largest and most ornamental plan of the city, at the apex of its flowering as the second port of the Netherlands during the Dutch Golden Age.

After successfully completing his plan of Haarlem in 1688, Romeijn de Hooghe was commissioned by the burgomasters of Rotterdam to publish a plan of their city. He carried out the survey with the collaboration of Johannes de Vou. Their initial efforts were met with disappointment from the burgomasters, who wrote to de Hooghe on 11 January 1692 asking him to return to the drawing board. Their second attempt met with the burgomasters’ satisfaction and forms the present work. De Hooghe was well remunerated for his efforts, to the tune of 2000 guilders. However, his partner De Vou only received one hundred guilders.

De Hooghe was responsible for the central bird’s-eye plan of the city. There is a beautiful illustration at the lower edge of a female personification of Rotterdam, wearing a turreted crown mimicking the city walls and holding a caduceus, a sign of virtue. She is accompanied by a river god, representing the Rotte. Fittingly for a port city, they are surrounded by sea gods. A laurel-crowned boy to the right of the river god points to a pair of globes, signifying the mastery of navigation which made the city rich through maritime trade. To the left, the two water spirits carrying a large cornucopia represent Africa and America, offering up their goods for the wealth of Rotterdam. The upper border is formed by the coat-of-arms of the city in the middle, flanked by the arms of the burgomasters, to whom there is a dedication at the upper right of the plan. The burgomasters’ arms are backed by fasces, the symbol of strong government. Johannes de Vou contributed the prospect of the port at the lower edge and the city views bordering the bird’s-eye plan, finely etched to show Rotterdam bustling with life.