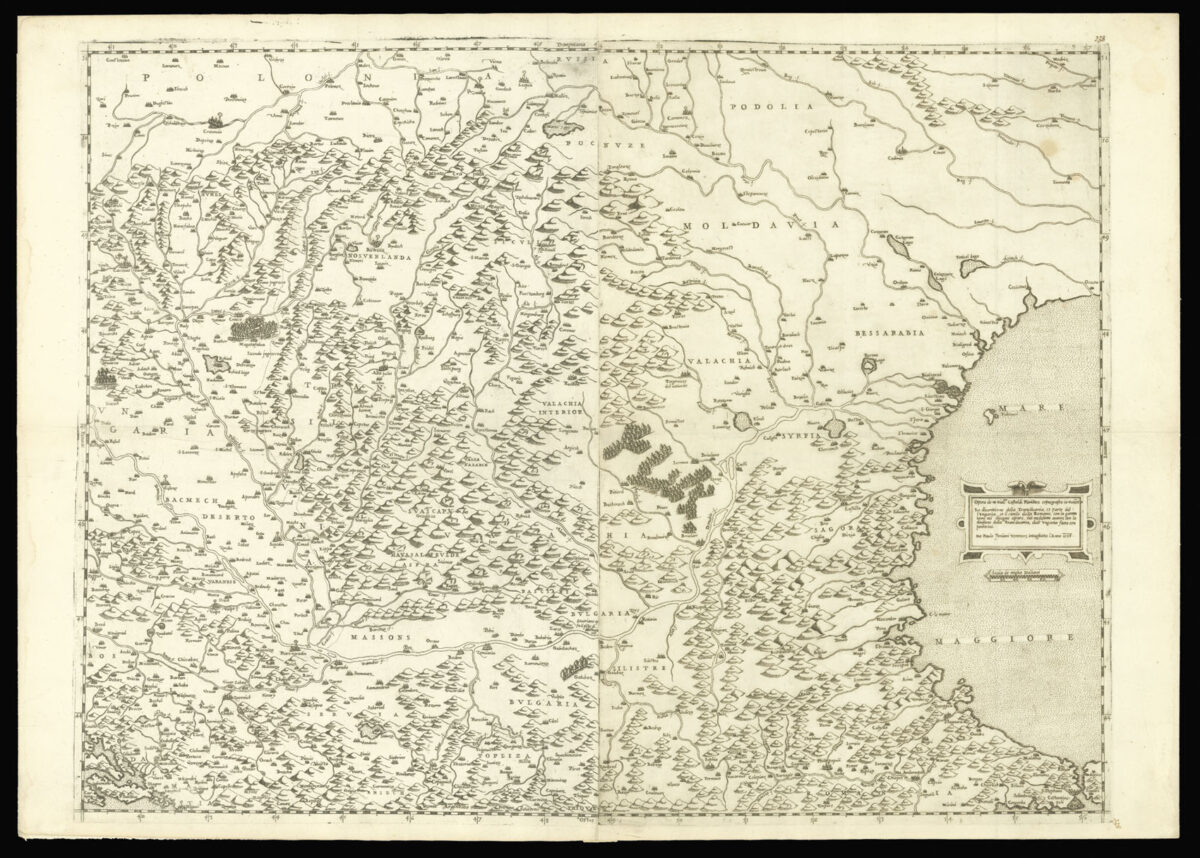 Rare map of the Lafreri School.

The map is based upon Gastaldi’s map of 1559, one of the most influential maps of the region which would be copied by the likes of Ortelius and de Jode. The present map consists of the upper part of Gastaldi’s large four sheet map of southeastern Europe. He planned the map in such a way that the individual sheets could be used separately, and the sheets are often found scattered in collections rather than mounted together.

After the Venetian senate granted him the privilege to print on 29 April 1559, Gastaldi published the (as here) the two northern quadrants of the map. The present map was published by Paulo Forlani, in 1566, on three sheets (the present example lacks the western extension); Forlani has added extra material and extended the map some 14cm to the north. This extends the coverage from the latitude of Vienna to that of Vratislavia (Wroclaw).

Giacomo Gastaldi (c.1500–1566) was ​“one of the greatest cartographers of the sixteenth century ” (Burden); born in Piedmonte at the turn of the sixteenth century, he moved to Venice some time before 1530. The first record we have for him is a privilege granted by the Venetian Senate for the publication of a perpetual calendar. His first dated map appeared in 1544, by which time he had become an accomplished engineer and cartographer. Karrow has argued that Gastaldi’s early contact with the celebrated geographical editor, Giovanni Battista Ramusio, and his involvement with the latter’s work, ​‘Navigationi et Viaggi’, prompted him to take to cartography as a full-time occupation. It has been suggested by Nordinskold , that he may have aiding in the repairing and or repairing of the famous wall maps in the ​‘Sala dello scudo’ in Venice. In any case Gastaldi was helped by Ramusio’s connections with the Senate, to which he was secretary, and the favourable attitude towards geography and geographers in Venice at the time.

“Cosmographer to the Venetian Republic, then a powerhouse of commerce and trade. Gastaldi sought the most up to date geographical information available, and became one of the greatest cartographers of the sixteenth century” (Burden).