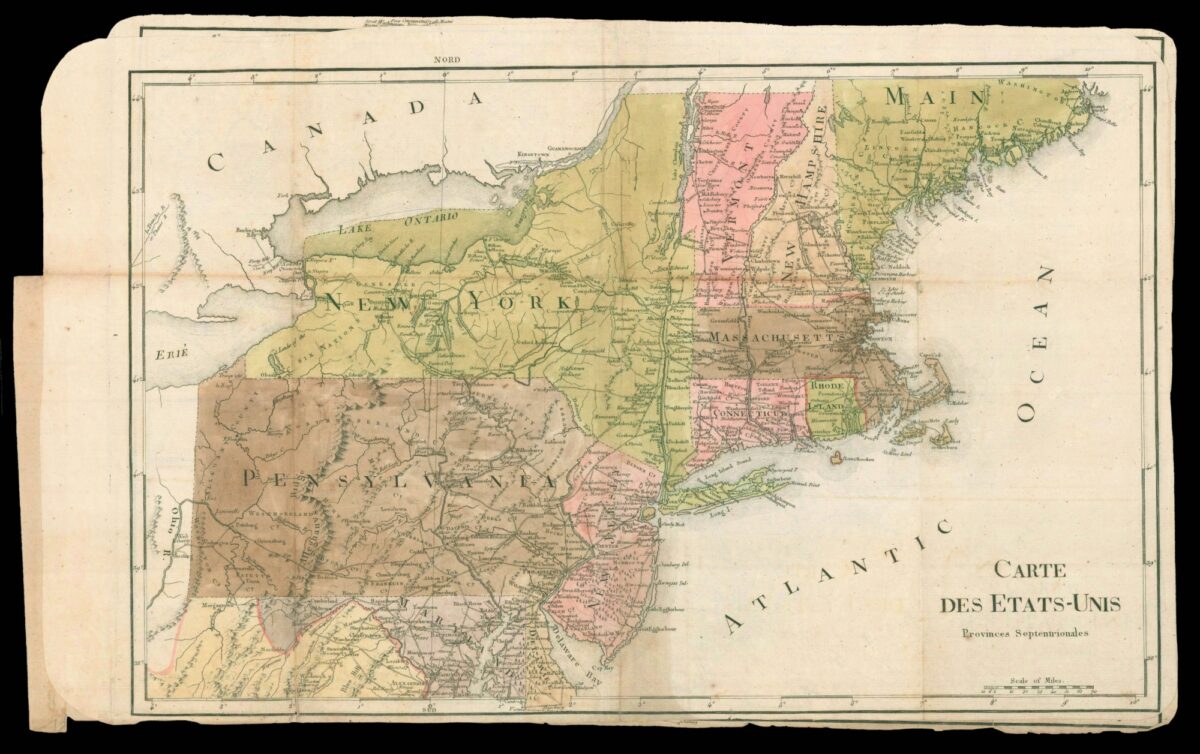 These maps, from the library of the Rochambeau family, were published in the first edition of Rochefoucauld-Liancourt’s travels in the United States, ​‘Voyage Dans les États-Unis D’Amérique, Fait en 1795, 1796 et 1797…”, Paris, 1799, annotated in an early 19th-century hand after Abraham Bradley Junior’s 1796 map ​‘A Map of the United States. Exhibiting Post Roads & Distances’. They are reduced copies of the 1796 first edition of Bradley’s map, and are therefore the first French edition of these maps.

The Comte de Rochambeau (1725–1807), was a battle-hardened French general chosen by King Louis XVI in 1780 to command the expeditionary corps in the United States under the orders of General George Washington. Their combined success at the Siege of Yorktown on the 19th of October ​‚1781, ended the Revolutionary War and secured American independence.

1.“Carte générale des États-Unis de l’Amérique Septentrionale, divisée en ses 17 provinces” annotated in an early 19th-century hand numbering each of 16 states, giving the location of Native American tribes, providing a key, showing the major post roads from Main to South Carolina, all after Abraham Bradley’s map of 1796, acknowledged by the inscriber who has replaced the imprint with ​“par Abraham Bradley Jun.r”

This map of the East Coast extends from Quebec south to include part of East and West Florida; the western boundary of Georgia extends to the Mississippi River; a strip of land extending westward between Georgia and Tennessee is designated ​“United States Territory,” having been ceded back to the United States in 1787 from South Carolina; another strip between Georgia and West Florida is ​“Land claimed by the united states”, referring to the ongoing dispute between the United States and Spain; all the land to the west, which would become the Louisiana Purchase is ​“Spanish Territory Louisiana.”

English captions and French title. Manuscript ink annotations in French indicating the names of the 17 states and the position of the Indian tribes. Ink manuscript inscription to verso ​“IK 403” [shelfmark of Rochambeau family library] and as ​“Etats-Unis en 17 provinces.”

2. The ​“Carte des États-Unis, Provinces méridionales” shows Kentucky, Virginia, Tennessee, North and South Carolina, Georgia, a strip of land between Tennessee and Georgia as ​“United States Territory”, and to the south of Georgia ​“Land claimed by the united states”.

3. The ​“Carte des États-Unis, provinces Septentrionales” shows the states from Main (sic) to Maryland and Delaware.

François Alexandre Frédéric, duc de La Rochefoucauld-Liancourt (1747–1827), was a French writer and courtier. A social and scientific reformer, he was elected to the Estates-General and pushed for changes to the absolute monarchy of France. Rochefoucauld-Liancourt was the first to warn Louis XVI of the fall of the Bastille; when the king called it a revolt, Rochefoucauld Liancourt replied ​“No sire, it is a revolution”. Despite being sympathetic to the original aims of the Revolution, and serving as the first president of the Constituent Assembly, he opposed republicanism, and secretly tried to arrange for the escape of the king.

Following the storming of the royal palace in August 1792, and the beginning of the September Massacres later that same year precipitated his flight from France, and he went into self-imposed exile in America. From London, in September, 1794, Angelica Schuyler Church wrote to her brother-in-law Alexander Hamilton with a glowing introduction. Liancourt made his was to Philadelphia in November, and travelled extensively from ​“le Haute-Canada” above Lake Ontario to Charleston, South Carolina, taking notes on everything from the economy, to slavery, to agriculture. After returning to France in 1799 when Napoleon took power, he published his analysis as an eight-volume work, in which these maps were published.

​“My dear Brother
I have very particular and very good motives to ask your kindness for the Duke de Liancourt. he loved Liberty with good sence and moderation; and he meant so well towards his country as to introduce into France a better system of Agriculture and to soften the situation of the Lower class of people there: Virtue has not found its reward, for in the many scenes of distress that has afflicted his unfortunate country, he like many more good men has been obliged to leave his possessions and seek an Asylum in this country.

He goes to America, and goes there without a friend, unless my dear Brother, who is always so good, will extend to Monsieur de Liancourt his ease. besides many good Qualities, this gentleman is the friend of the Marquis de La Fayette…
Angelica Church.“


On April 10, 1795, Liancourt wrote to Hamilton, in a letter docketed by the recipient and then later by his widow Elizabeth Schuyler Hamilton. Rough translation from French:

​“You have allowed me to count on your interest, Monsieur, and this without complaint, a hope for which I am flattered. I am herewith asking you to prove it, which I hope will be one for you [interest] since it seems to me not being a stranger to you. I am at the point of leaving for a voyage that will take me as far as Canada. I will enter the United States through the province of Maine from there for another voyage in the east – There are introduction letters to principle places that I am due to visit, that I would be more pleased to get from you rather than anyone else. If you agree as I think you will to give them to me, would you please send them to General Knox in the province of Maine, where I will be until the end of July. I flatter myself that you will excuse my importunity!…“


Although France and the United States had been allies since 1778, political developments in both countries damaged the relationship. The French Revolution was viewed by Federalists like Alexander Hamilton as a dangerous precedent; and the ensuing wars between Britain and France placed the neutral United States in a precarious position. Relations deteriorated further on the signing of Jay’s Treaty (1794) with Great Britain. France ordered the seizure of American ships carrying British goods and, in 1796, the French refused to admit American diplomats. This impasse led to the XYZ Affair, which provoked Congress, in turn, to suspend commercial relations with France and to authorize American warships to seize armed French vessels. This undeclared naval war lasted for three years with the United States capturing about eighty-five French vessels

1.“Carte générale des États-Unis de l’Amérique Septentrionale, divisée en ses 17 provinces” annotated in an early 19th-century hand numbering each of 16 states, giving the location of Native American tribes, providing a key, showing the major post roads from Main to South Carolina, all after Abraham Bradley’s map of 1796, acknowledged by the inscriber who has replaced the imprint with ​“par Abraham Bradley Jun.r“ 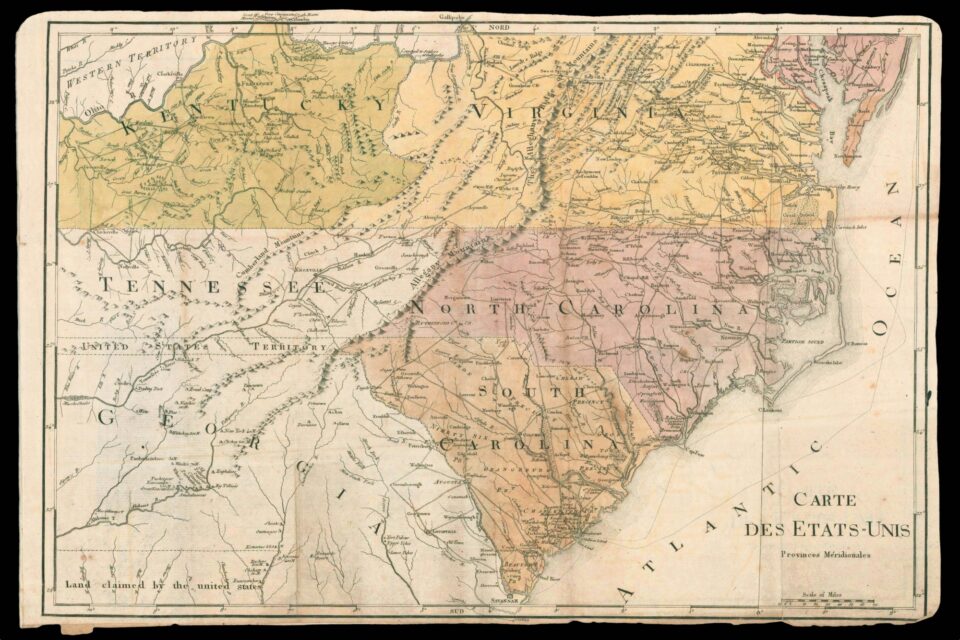 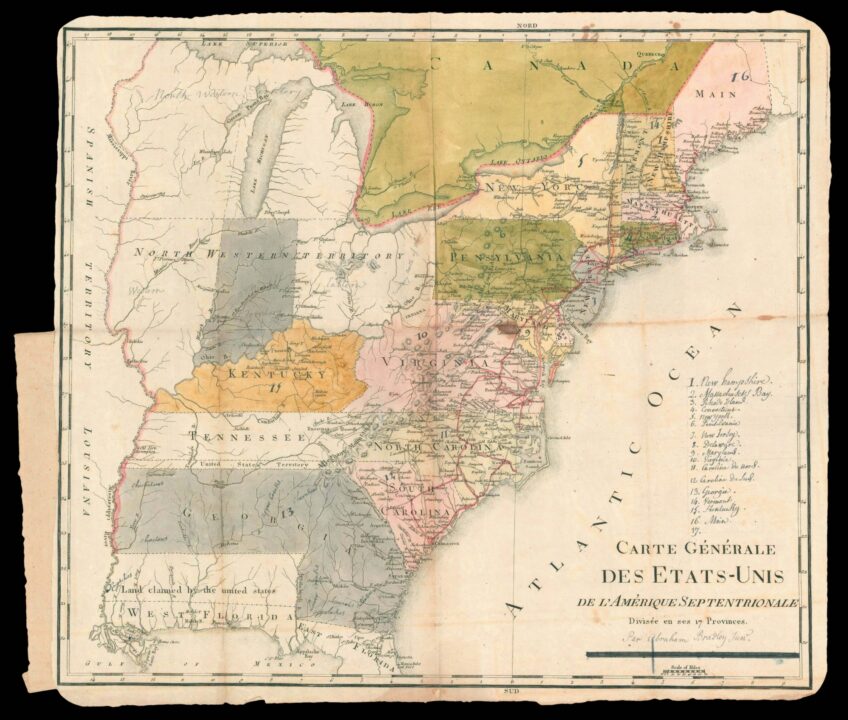