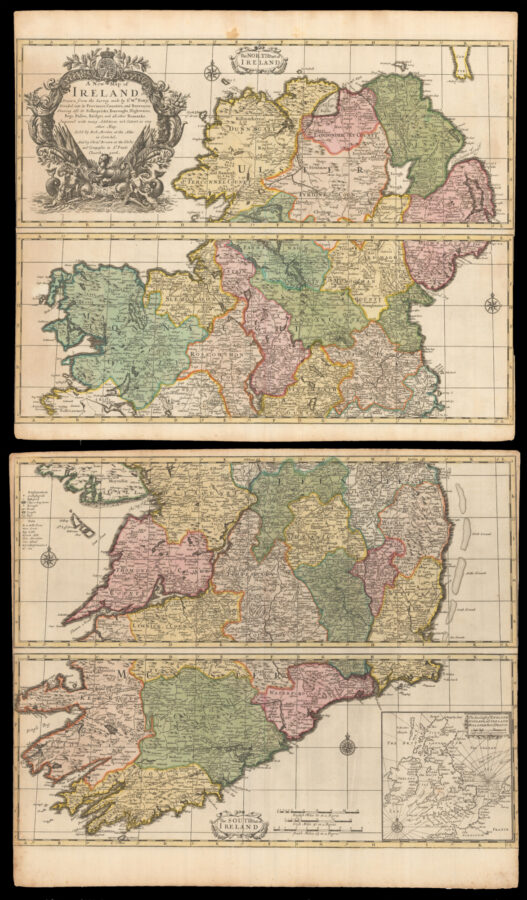 A New Map of IRELAND Drawn from the Survey made by Sr. Wm. Petty; Divided into its Provinces, Counties, and Barronies; Shewing also its Bishopricks, Borroughs, Highwaies, Bogs, Passes, Bridges, and all other Remarks.

Morden worked in concert with mapseller Christopher Browne on a number of publications, including the present map of Ireland, which appears to have been published around 1689, with the present example of the map included in a composite atlas compiled in 1691.

The cartography is based on the survey made by Sir William Petty. Petty was an English economist, scientist, musician, philosopher, and generally fascinating character: a true renaissance man. A precocious and intelligent youngster, he became a cabin boy in 1637 but was set ashore in Normandy after breaking his leg on board. After this setback, he studied with the Jesuits in Caen, supporting himself by teaching English. After a year, he returned to England, and had by now a thorough knowledge of Latin, Greek, French, mathematics, and astronomy.

After an uneventful period in the Navy, Petty left to study in Holland in 1643, where he developed an interest in anatomy. Through an English professor in Amsterdam, he became the personal secretary to Thomas Hobbes allowing him contact with Descartes, Gassendi and Mersenne. In 1646, he returned to England and, after developing a double-writing instrument with little success in sales, he studied medicine at Oxford University. He befriended Hartlib and Boyle, and he became a member of the Oxford Philosophical Club.

By 1651, Petty was an anatomy instructor at Brasenose College, Oxford, as deputy to Thomas Clayton the younger. He was also Gresham Professor of Music in London, a friend of Samuel Pepys, and a founder member of The Royal Society. In 1652, he left on a leave of absence and travelled with Oliver Cromwell’s army in Ireland, as physician-general. His breadth of interests was such that he successfully secured the contract for charting Ireland in 1654, so that those who had lent funds to Cromwell’s army might be repaid in land – a means of ensuring the army was self-financing. This enormous task he completed in 1656 and became known as the Down Survey, published in 1685 in an atlas entitled ​‘Hiberniae Delineatio’. As his reward, he acquired approximately 30,000 acres in Kenmore, in southwest Ireland, and £9000. This personal gain to Petty led to persistent court cases on charges of bribery and breach of trust, until his death.

Morden’s map of Ireland from the Down Survey is printed on four thin horizontal sheets, joined here, the upper two covering ​“the North Part of Ireland”, and the lower two ​“the South Part of Ireland”. To the left of the image is a key identifying the symbols used on the map to represent geographical and topographical features, while along the lower border there are three scale bars. There are also three compass roses across the map. The lower right-hand corner is an inset map of the British Isles, also encompassing part of the coast of France and the Netherlands.

The counties of Ireland are delineated by colour and identified by name, and within each, towns, cities, rivers, roads, hills and woodlands are depicted, often represented pictorially. In major cities, such as Dublin, there are small illustrations of important buildings. Islands and significant rocks in the surrounding seas are also shown and labelled.

Robert Morden was a leading English mapmaker from the last quarter of the eighteenth century. He was probably apprenticed to Joseph Moxon, and made free by about 1666. His most famous works are curiously among his least important but most successful: his pack of playing card maps of the English and Welsh counties, published in 1676; his ​‘Geography Rectified’, a popular pocket-sized geographical text with maps; the maps he prepared for William Camden’s ​‘Britannia’ (1695) and ​‘The New Description and State of England’ (1701).

Morden also produced several maps of the British Isles and England and Wales, Scotland and Ireland, as well as plans of London, and a good sequence of maps of foreign parts, maps of theatres of war and so on, but did not have the range of stock to produce atlases of his folio maps, hence their considerable rarity today.

Morden’s career was constantly plagued by lack of money. Many of his most important maps were published in partnership with others, but the market for maps in England at this time was too small to sustain the number of mapmakers. He himself was to complain of his having ​“lain latent under the horizon of unknown obscurity, and irresistible poverty”.

Extremely rare: we have been able to trace only three institutional examples of Morden and Browne’s map of Ireland, held at the British Library, the Bibliothèque nationale de France, and Yale University Library.