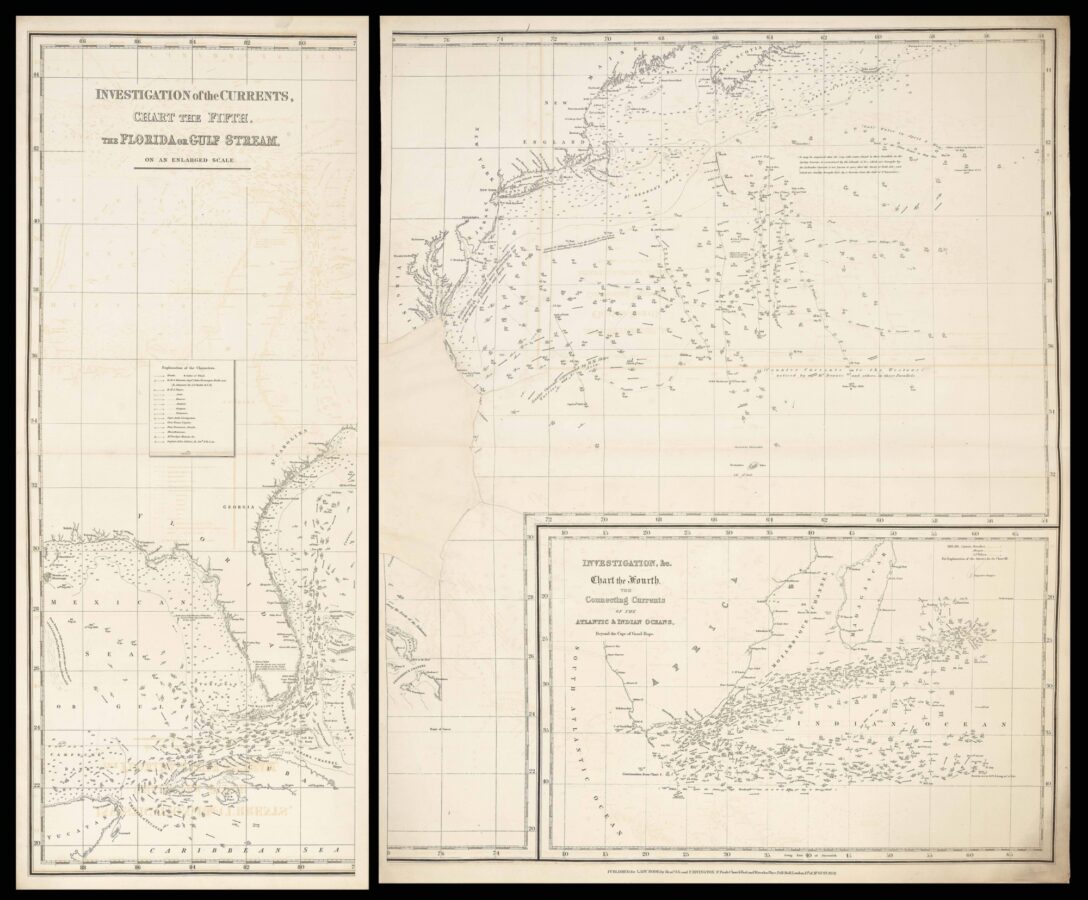 An investigations on the currents of the Atlantic Ocean. To His Most Gracious Majesty William the Fourth, These Charts of the Prevalent Currents in the Atlantic Ocean, Constructed by the late Major Rennell, are with special permission, dedicated by the Authors Affectionate Daughter, and His Majesty’s dutiful Subject Jane Rodd.

The exceedingly rare first, and only, edition of Rennell’s charts of ocean currents. Published posthumously by his daughter, the present atlas would become a foundation work of Oceanography and, ​“provides a departure point for oceanographic research up to the present” (Speake).
The work consists of five charts on ten sheets covering the Atlantic Ocean, parts of the Caribbean, and the Cape of Good Hope in unprecedented detail and scientific rigour. Charts I and II cover the eastern and western Atlantic Ocean, respectively; chart III: southern Africa, the Lugallus Current and the counter current from the Atlantic to the Indian Ocean; chart IV: currents between the Indian and South Atlantic Ocean, especially the winds that favour passage towards Australia; and chart V: the Gulf Stream.

The charts themselves provide information on currents, their direction, speed, and variation throughout the year; wind direction; sea temperature; and soundings. A table lists the sources consulted for the current’s direction, such as Horsburgh, Cook, and Beaufort, together with their unique marker i.e. the information on currents taken from Horsburgh is marked by an arrow with a square at the tail, whereas Cook is marked by an arrow with a line through the tail.

The charts together with text which accompanied them, would be, when published in 1832, the ​“first comprehensive model of global ocean currents” (Kneitz), and the first to accurately show ​“winds and currents, based on observations for an ocean and to show how the course of ocean currents was largely shaped by prevailing winds”. (Thorpe)

Rennell, as the key on the charts attest, collected a great deal of the data for the work from trusted sources and friends, such as Admiral Beaufort, William Bleigh or the log books of Tremayne Rodd, and Alexander Dalrymple. He would spend much of the last 20 years of his life sifting through and collating the vast amount of information that he had collected, and subjecting it to rigorous scientific analysis. So exacting was he, and so want ​“to give anything to the public while there was a possibility of making it more complete” (Jane Rodd), that the work would be published posthumously, by his daughter Jane Rodd, in 1832, two years after he had passed away. Jane in the work’s dedication thanks several people of its eventual publication, but most notably the hydrographer John Purdy, whom Jane had employed as editor due to her father’s ​“high opinion of his talents”.

Rennell distinguished himself as a cartographer at an early age. While still a schoolboy, he drafted a remarkably accurate map of his native Chudleigh (near Exeter), which presently rests in the archives of the Royal Geographical Society. Anxious for adventure and opportunity through which to explore his cartographic interests, Rennell entered the Royal Navy as a midshipman at age 14. Serving as a coastal surveyor during the Seven Years’ War (1756–1763), he accompanied the Scottish geographer Alexander Dalrymple to the Philippines in 1762, charting coasts and harbours while cultivating a lasting interest in currents and winds.
Rennell spent the next 15 years in India in the employ of the East India Company, carrying out numerous surveys of the lands in and around Calcutta and beyond. In 1777, he retired from active service and spent the rest of his life in London, where he immersed himself in the cartographic archives at East India House, publishing notable cartographic works, such as the Bengal Atlas, and Memoir of a Map of Hindoostan, but it was his work on hydrography and particularly oceanography, ​“that Rennell’s efforts were revolutionary”. (Speake)

We are only able to trace seven institutional holdings with a complete set of the charts: University of Glasgow; British Library; Danish National Library; BNF; Oxford University Library; National Library and Archives, Canada; and Manchester University. We are unaware of any of the present charts appearing at auction since the Second World War.

Contents
1. RENNELL, James. Investigation of the Currents, Chart the First. The Eastern Division of the Atlantic Ocean [with inset chart lower left] Continuation beyond the Cape of Good Hope. London, published for Lady Rodd, by J.G. and F. Rivington, 13th August, 1832. Engraved chart on three sheets, (charts 1, 4 & 5 in the atlas), inset chart lower left. Dimensions: (if joined) 1515 by 780mm.

2. RENNELL, James. Investigation of the Currents. Charts the Second. The Western Division of the Atlantic Ocean. To his most gracious majesty William the fourth, these charts of the prevalent currents in the Atlantic Ocean, constructed by the late Major Rennell are, with special permission, dedicated by the author’s affectionate daughter and his majesty’s dutiful subject Jane Rodd. London, published for Lady Rodd, by J.G. and F. Rivington, 13th August, 1832. Engraved chart on three sheets, (charts 6, 7, and 8 in atlas). Dimensions: (if joined) 1430 by 790mm.

3. RENNELL, James. Investigation of the Currents, Charts the Third. The South-African Current and Counter Current from the Atlantic to the Inidan Ocean. London, published for Lady Rodd, by J.G. and F. Rivington, 13th August, 1832. Engraved chart on two sheets (charts 9 & 10 in the atlas). Dimensions: (if joined) 770 by 910mm

[Charts 4 & 5 printed on the same map sheet]
4. RENNELL, James. Investigation of the Currents, Chart the Fifth. The Florida or Gulf Stream, on an enlarged scale. London, published for Lady Rodd, by J.G. and F. Rivington, 13th August, 1832. Engraved chart. Dimensions: 320 by 490mm

5. RENNEL,L, James. Investigation, &c. Chart of the Fourth. The Connecting Currents of the Atlantic & India Oceans, Beyond the Cape of good Hope. London, published for Lady Rodd, by J.G. and F. Rivington, 13th August, 1832. Two charts on two sheets, (charts 2 & 3 in the atlas), loss to left portion of right sheet skilfully repaired in facsimile. Dimensions: (if joined) 930 by 780mm. 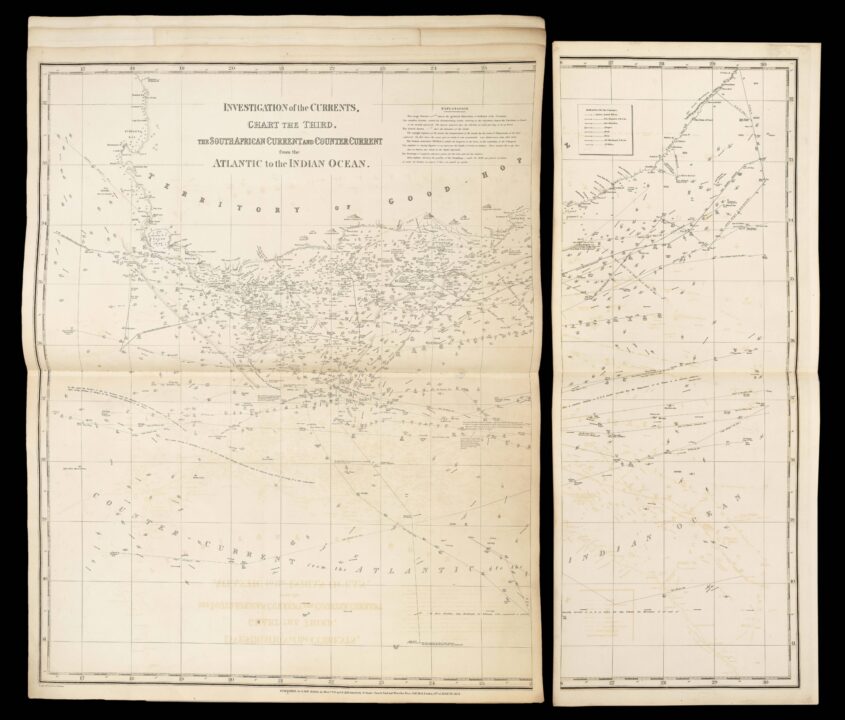 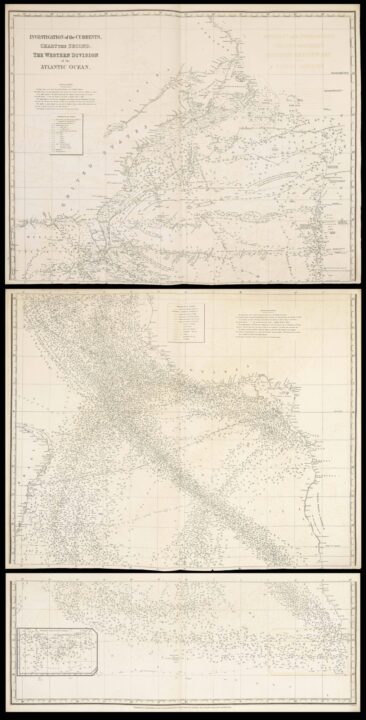 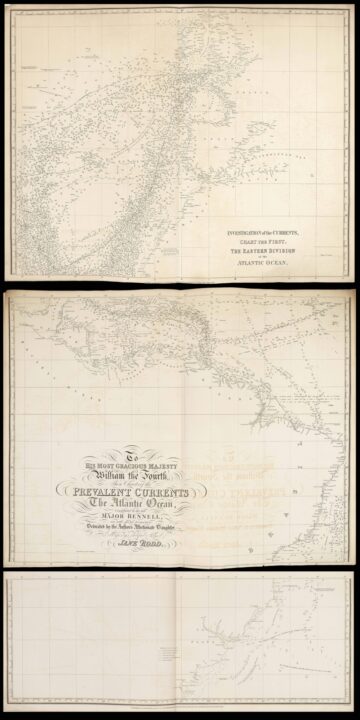