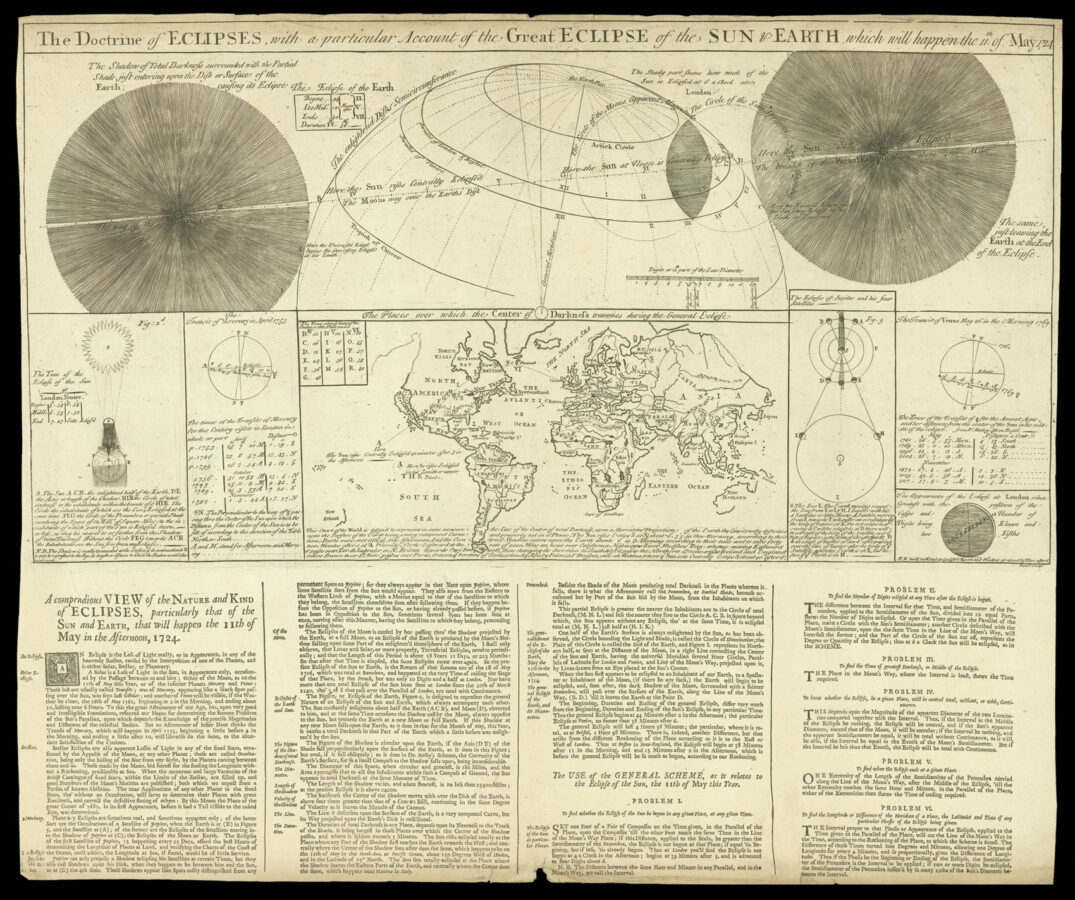 Rarest broadside of the 1724 eclipse

The Doctrine of Eclipses with a particular Account of the Great Eclipse of the Sun & Earth which will happen the 11th of May 1724. Parker Sculpt.

This sheet is one of the most elaborate, and rarest, map-sheets devoted to the eclipse of 1724. It is signed only by the engraver, Samuel Parker (fl. 1715 — 1728); neither the map nor the letterpress explanation printed below contain a publishers’ imprint, and none is identified by ESTC, but the item can confidently be attributed to the brothers, and sometime partners, Thomas (II) and John Bowles, as an announcement in the Daily Journal (issue 1011) for 17th April 1724 records:
​“This Day is publish’d, in a large Sheet of Paper, The Doctrine of ECLIPSES, represented in several Figures; as, I. The Nature of an Eclipse of the Sun by the Shadow of the Moon in general, and the great Eclipse of the Sun and Earth that will happen in May next in particular. 2. The Appearance of the Eclipse of the Sun at London when darkest. 3. A small but remarkable Eclipse of the Sun by the Planet Venus. 4. The next Eclipse of the Sun by the Planet Mercury. 5. The Planet Jupiter, with his four Secondaries, and how each are eclipsed. 6. A Map of the whole Earth, describing the Center of total Darkness.“

Thomas Bowles (II) (1688–1767) inherited the family print-selling business from his father, Thomas (I), while John (1701–1779) was bequeathed sufficient to establish his own business although, in the early part of his career, he is generally found working in association with his brother. The core of their respective business was print-selling but both brothers, and more so John, published numbers of interesting and rare maps, to capitalize on events likely to excite the buying public, as here.