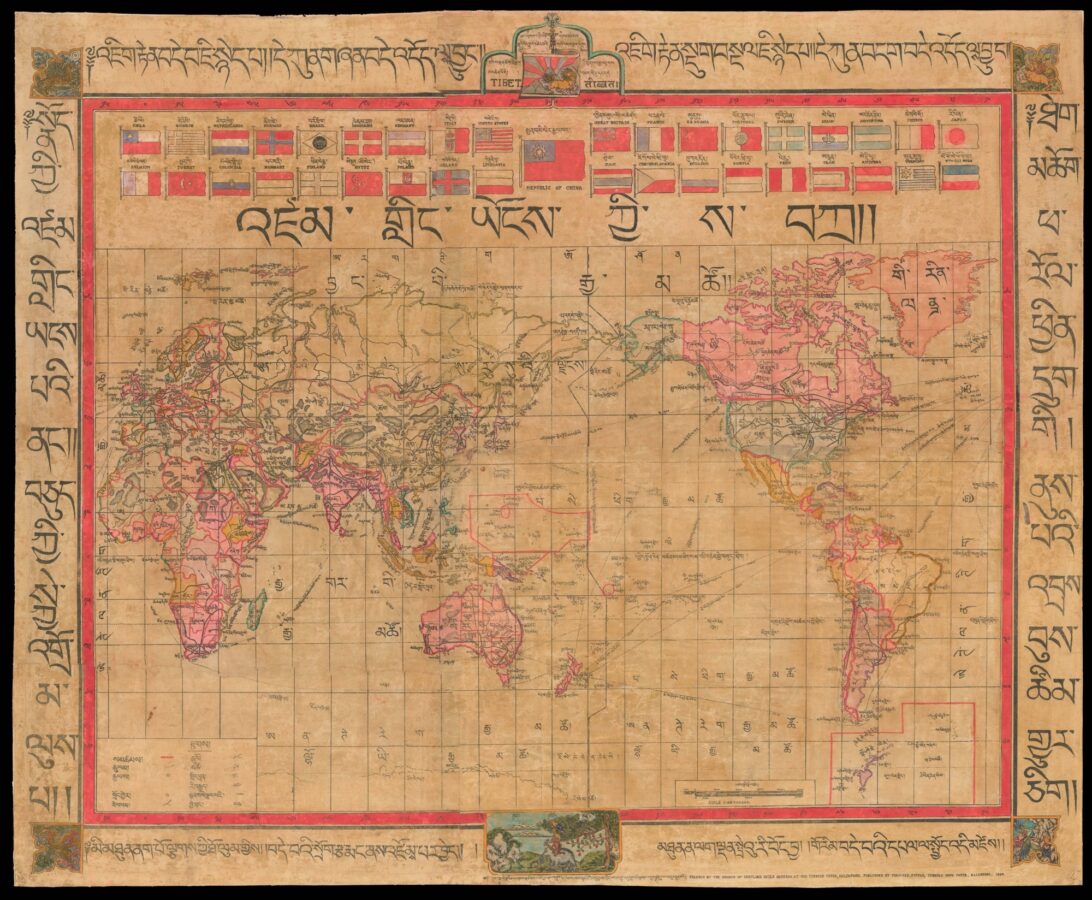 By THE CHURCH OF SCOTLAND GUILD MISSION, 1940

This world map was published in 1940 by Gergen Tharchin, the revered editor of The Tibet Mirror, and effectively captures the convergence of Oriental and Western influences in Tibet at the time. He started the newspaper in 1925 and it remained in circulation until 1963. Tharchin’s goal was to open up Tibet to the outside world by translating and compiling various articles and stories from international publications, making the newspaper an invaluable source of information for Tibetans. It featured articles ranging from politics to technology, travel to biography, and also included a wide range of visual material. Tharchin believed that maps were of great importance as an educational, administrative and navigational tool; he is even reported to have hired one young man on the grounds that he recognised the map of Asia hung on his wall. Tharchin printed many different maps, including large-scale world representations, detailed maps of specific countries and regions, and strategic plans of contemporary conflicts. The issue of the newspaper published on United Nations Day in 1943 contained a large world map showing the flags of all the UN member states, similar to this map. Although himself a Christian, he used his printing press to create maps of India for Buddhist pilgrims. His maps were often taken from English-language papers, such as the London Times, but some of the world maps may have been his own original work.
The Tibet Mirror was based in Kalimpong, where the Church of Scotland had a strong missionary involvement and owned 16 acres of land near the city centre. Other Tibetan writings by Tharchin were printed at ​“The Church of Scotland Guild Mission at the Tibetan Press”, the same text that appears pasted along the lower border of this map. It is probable that the editor collaborated with this organisation to produce his publications and maps. Along with its informative function, this map was clearly designed with a decorative purpose in mind, shown by the bold colouring, intricately illustrated Tibetan animals and ornate cartouches. The cartography and decoration reflects European practices, again demonstrating the effect of global influences on Tharchin’s work.

We have not been able to trace another example of this rare map.