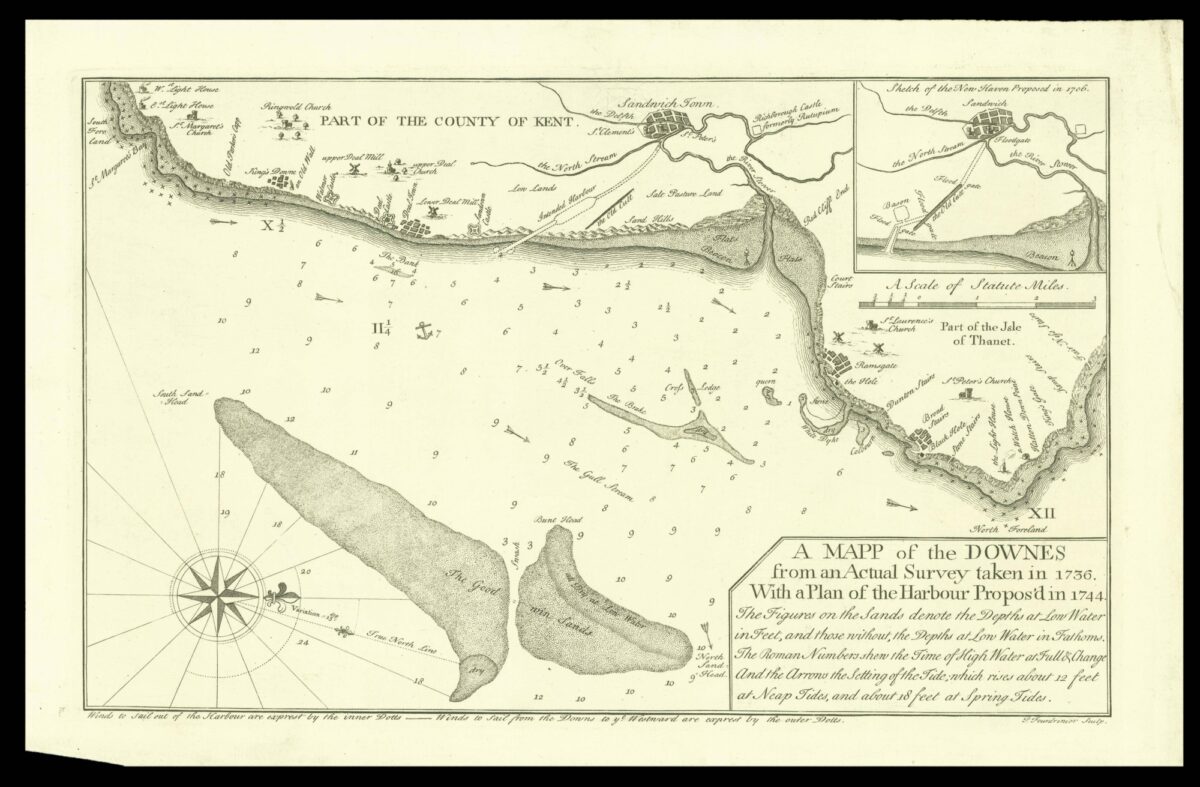 Rare survey of Sandwich in Kent

[Kent] A Mapp of the Downes from an Actual Survey taken in 1736. With a Plan of the Harbour Propos’d in 1744. The Figures on the Sands denote the Depths at Low Water in Feet, and those without, the Depths at Low Water in Fathoms. The Roman Numbers shew the Time of High Water at Full & Change And the Arrows the Setting of the Tide; which rises about 12 feet at Neap Tides, and about 18 feet at Spring Tides. P. Fourdrinier sculp.

Charles Labelye (1705–1762) was a Swiss engineer who settled in England, best known as the architect and builder of Westminster Bridge. However, he was also involved in various schemes for harbour improvements, notably those of Sandwich (1736–1737), Great Yarmouth (1747) and Sunderland (1748).

His survey of Sandwich was published on his two-sheet ​‘A Mapp of the Downes much more correct than any hitherto published Shewing the true Shape, & Situation of the Coast between the North and South Forelands, & of all the adjacent Sands together with the Soundings at Low=Water, Places of Anchorage, & all the necessary leading Marks By Charles Labelye Engineer …’ (London, 1737), his plan being to extend the harbour at Sandwich so as to afford safe haven for ships in The Downs, and serve as a naval base in the event of war with France. Nothing came of the scheme, perhaps because of the distraction of his involvement with the Westminster Bridge project.

However, in 1744, Fourdrinier, who was presumably the original engraver, reprinted the plates, advertising the chart in the Daily Advertiser (issue 4149) for 4th May:

​“Just publish’d, (Price 1s. 6d.) Printed on Two Sheets of Imperial Paper, A Map of the DOWNS, much more correct than any hitherto publish’d; shewing the true Shape and Situation of the Coast between the North and South Forelands, and all the adjacent Sands, together with the Soundings at low Water, Places of Anchorage, and all the necessary leading Marks, from an actual Survey thereof, taken in the Presence of several able Pilots. By Charles Labelye, Engineer. Note, The Situation most proper for the intended new Harbour, and some Account of it, are to be found in this Map only. …” in relation to a parliamentary discussion on the benefits of building a new harbour near Sandown Castle, on the coast between Sandwich and Deal.

It may well be that this smaller map was published at the same time, distributed to interested parties in the debate. However, this chart shows minor revisions compared to the 1736 survey; it is very similar to a finished manuscript survey by Labelye — ​‘A Correct Map of the Downes From An Actual Survey thereof taken by Charles Labelye Engineer … With the Plan of the new Harbour propos’d in 1744’ — in the Bibliothèque nationale de France, département des Cartes et plans, GE SH 18 PF 22 Div.2.P6 (part of the archive of the Service hydrographique de la marine).

However, the proposals fell into abeyance, with this example of the map the only one traced.