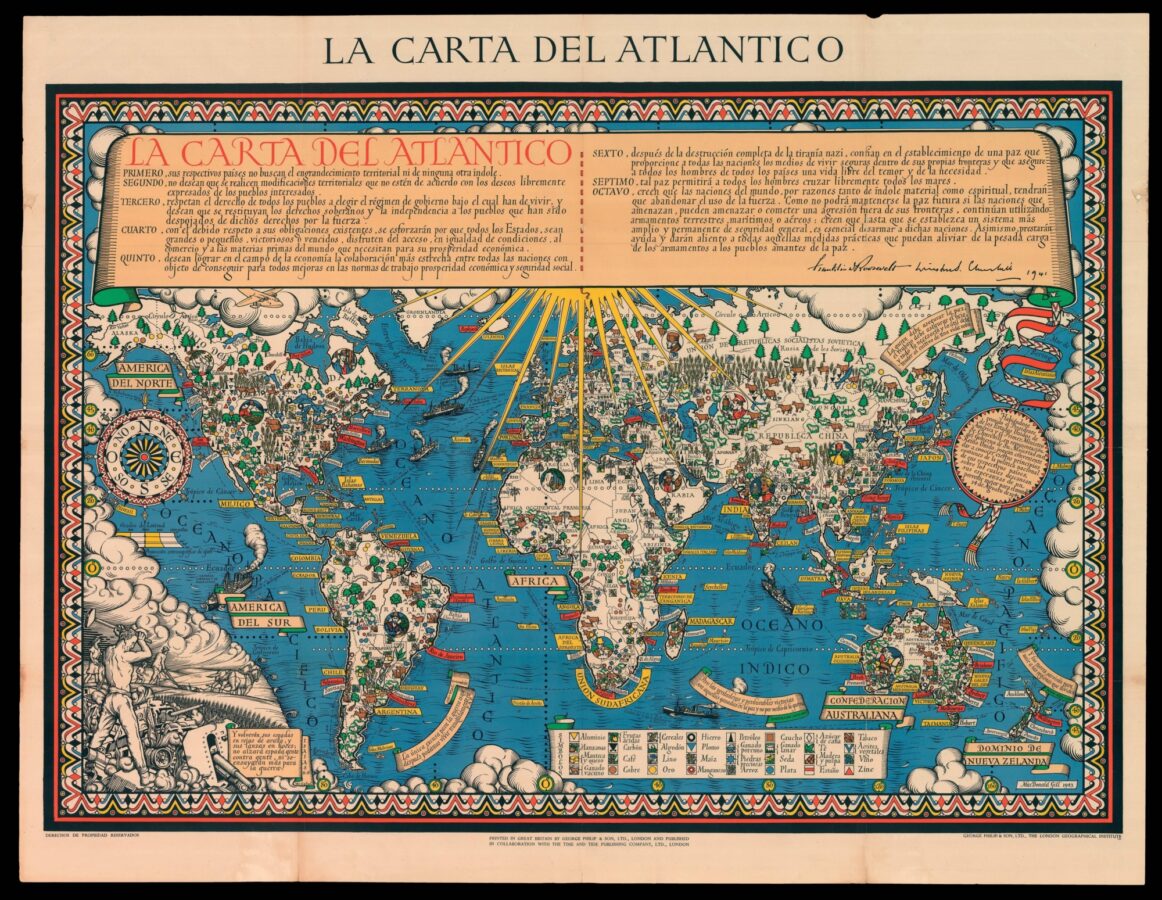 Gill was commissioned by the British Time & Tide magazine (1920–1986) following the World War Two Atlantic Charter agreement between the US President Franklin D. Roosevelt and UK Prime Minister Winston Churchill ​“for a better future for the world” 14 August 1941 — La Carta del Atlantico. Stunning design featuring detailed colourful pictorial depictions of agriculture and food production, industrial raw materials and traditional life around the world including images of people, animals, trees, cattle, ships at sea, planes flying overhead and markers with a symbol box listing the locations of metals, wine, crops, petroleum, tobacco, sugar, rubber, silk, coffee, fruit, precious stones etc., surrounded by clouds on the sides and the sun shining down from The Atlantic Charter in the text box at the top with a black and white image below of an industrial metal worker destroying tanks and machinery and a farming family ploughing a field with horses, the cities, countries, continents and quotes in banners with a seal and a compass point on both sides, all framed within a decorative border.

Leslie MacDonald Gill (1884- 1947) was a note graphic designer, cartographer, artist and architect. Born in Brighton, he was the younger brother of Eric Gill, one of the leading figures of the Arts and Crafts movement. In 1914 his ​“Wonderground Map”, commissioned by Frank Pick, and hung at every station, helped to save the London Underground by presenting an accurate map which also had a humorous side in cartoon style. Produced in poster form, it was also made available for sale to members of the public and proved to be very popular. Elder brother Eric, who at that time was engaged in a commission for Westminster Cathedral, was included at the bottom of the map. He also designed of the standard upper case lettering used on headstones and war memorials by the Imperial War Graves Commission. But it is perhaps his illustrated maps for which he is most well known. These maps have featured in a series of exhibitions including Magnificent Maps exhibition in 2010 at the British Library, an exhibition MacDonald Gill, Out of the Shadows in 2011 at the University of Brighton and at the Mind the Map exhibition in 2012 at the London Transport Museum.