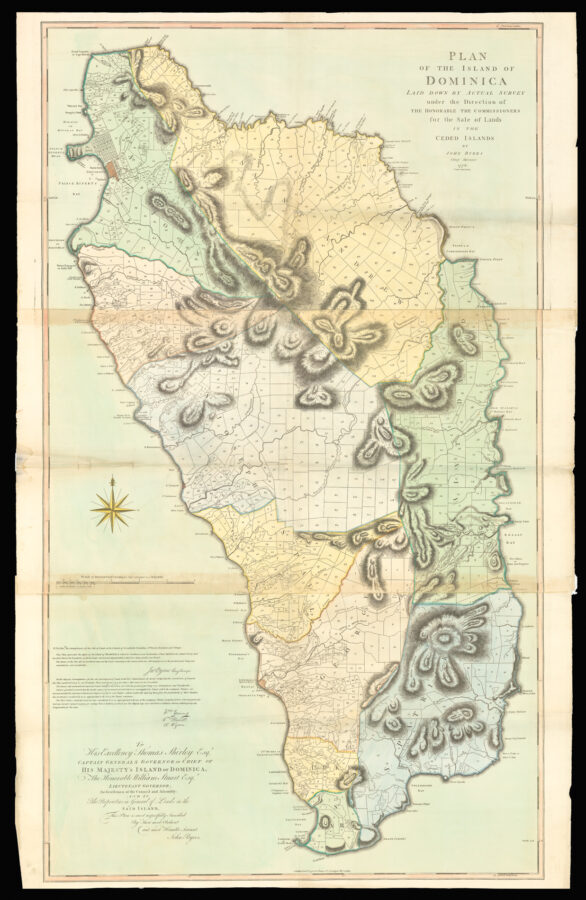 Plan of the Island of Dominica laid down by actual survey under the Direction of the Honourable the Commissioners for the Sale of Lands in the Ceded Islands By John Byers Chief Surveyor 1776.

When Britain took over the island, in 1763, one of the main tasks that occupied attention was the redistribution, sale and setting aside of land. A team of commissioners and surveyors was raised to organise the division of Dominica into lots and administer the sale of these lands in the name of the Crown. They were directed to sell the land by public auction to British subjects; an individual could not buy more than 100 acres if the land had been cleared or 300 acres if the land was forested. The initial task that occupied them was the surveying, sale, distribution and allocation of land on the island. The Chief Surveyor was John Byres and the map which he and his team produced laid the guidelines, coastal demarcation and boundaries of all properties on the island until the aerial photographs of 1956 and the first accurate British DOS map was published two hundred years later in 1964 (Byres: 1776, DOS: 1964). The sale of Dominica raised a total of £313,666 19s 2¼d. It all went to the British Crown. The system and pattern of landholding, which it instituted in the 18th century, has determined the social patterns of Dominica to the present.

The present map, divided the island into ten parishes and subdivided each parish into numerous lots no larger than 300 acres in size. These sections covered most of Dominica except for the extremely mountainous areas in the centre of the island. Even so, very little regard was given to the lay of the land and many of the lots were on the sides of precipitous slopes and deep valleys. Most were almost impossible to get to on foot, let alone establish estates and transport goods and the majority of these lots are still inaccessible today. To accompany his map of the island published 1776, Chief surveyor John Byres compiled a list of all the properties on the island. The list, complete with alphabetical index, shows the acreage of each lot with its original or present purchaser or lessee for each parish.

The map is rare. OCLC gives only 7 institutional examples (BL, London; Clements Library, Univ. of Michigan, Ann Arbor, MI, USA; Harvard, MA, USA; Library of Congress, DC, USA; National Library of Scotland, Edinburgh; National Maritime Museum, Greenwich; University of London, Institute of Commonwealth Studies, Senate House Library, London). We know of one other example in private hands. Of the 9 examples of which we are aware, only the present map and the map at Harvard have full colour.