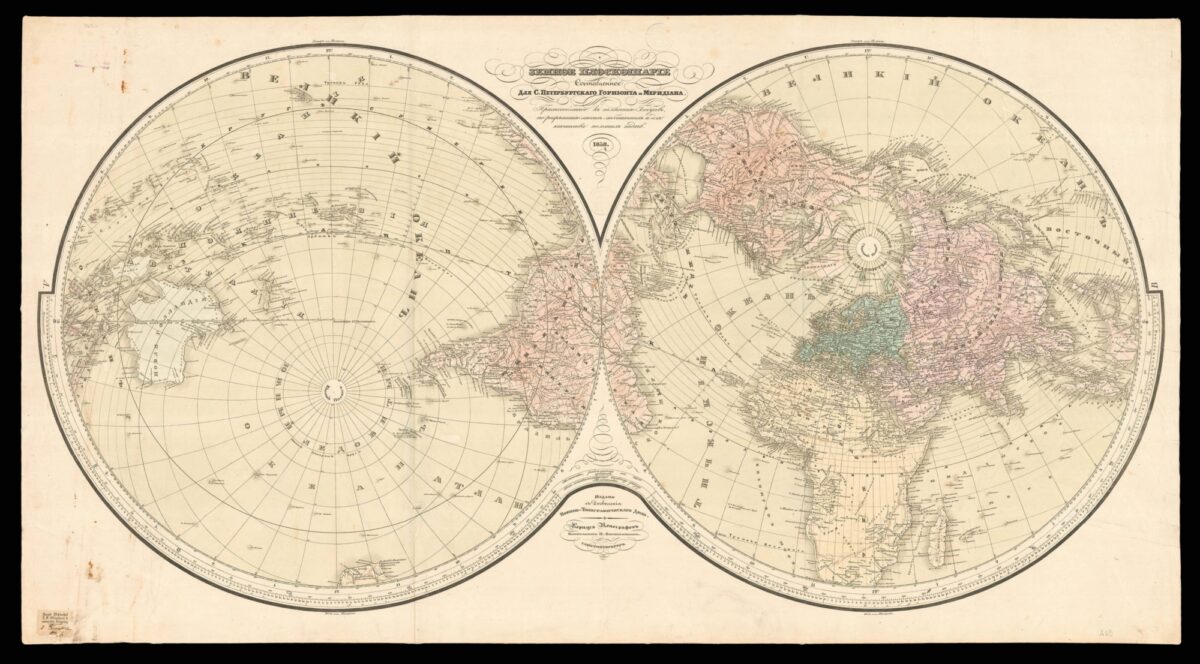 A map of the Earth compiled for the St. Petersburg horizon and meridian, adapted to replace globes, for the solution of many curious tasks, also useful for young people.

A rare Russian world map, produced during the reign of Tsar Nicolas I.

Throughout Russia’s history, geography and cartography have been linked to warfare and military expansion, with Peter the Great establishing the first topographical branch of the Imperial Russian Army in 1702. Later, in 1822, the department was expanded and eventually adopted the name Corps of Topographs; the need for more advanced and updated information had no doubt been impressed upon the rulers by Napoleon’s invasion of the previous decade. Mapping the vast expanse of the Russian empire proved understandably challenging, particularly due to its diverse landscapes and extreme climates. The Russian military topographers, therefore, required extensive training at the headquarters in St Petersburg before travelling to the harsh regions of Siberia and the Chinese borderlands to survey the territories. The Russian government was generous with funding, continuing to sponsor cartographic expeditions as long as the empire carried on growing.

The present map, published in 1838, was issued with a booklet written by the cartographer which contained instructions on how to use it, entitled ​‘Description of the use of the Earth’s area, compiled for the St. Petersburg horizon and meridian’. It was published during the reign of Tsar Nicolas I. Although by no means a tranquil period of Russian history (if such a period can be said to exist!), his rule was characterised by massive territorial, economic and industrial growth. It is likely that this rapid expansion inspired the heads of the Corps of Topographs to produce the present map, which shows the world as two polar hemispheres, on an azimuthal equidistant projection.

As indicated in the title, the present map was designed as a tool for geographical education; it is even claimed that the double-hemisphere world map is ​“adapted to replace globes”. A scale of degree surrounds each hemisphere and along the lower border there is a further scale. The St Petersburg meridian and parallel are shown. Major cities and rivers are named, and the continents are distinguished by colour. Relief, however, is not shown. The Russian Empire is shown in all it’s immensity, extending down into its new territories in the southern Caucasus.

This map is extremely rare. There is one other example in the State Historical Museum in Moscow, but we have been able to trace no more, either in institutions or at auction.