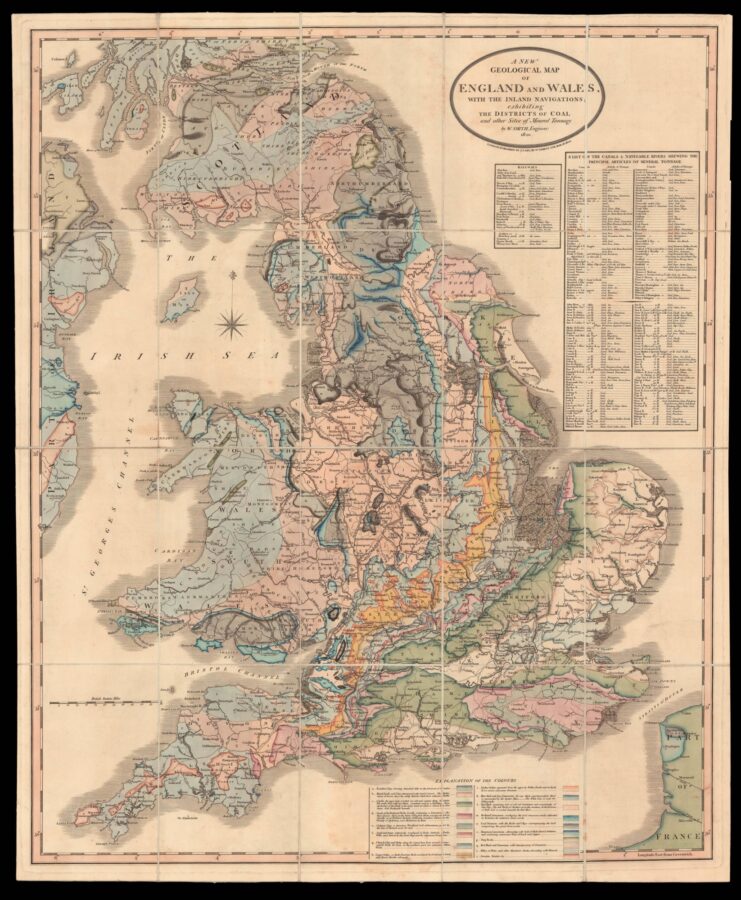 A New Geological Map of England and Wales with the inland navigations; exhibiting the districts of Coal and other Sites of Mineral Tonnage by W. Smith, Engineer: 1820.

The map, described on the slipcase label as ​“reduced from Smith’s large map:’ incorporates all of Smith’s many revisions to his original geological map of 1815, including changes made subsequent to the latest issue (post-1817) of the wall-map. ​“Copies have been recorded dated 1824, 1827, and 1828, but no change in the geological lines has been observed, although the shades of colour may vary” (Eyles).

The present single-sheet map was published during the same period as Smith’s ​“Geological Survey Atlas of England:’ a series of 24 slightly smaller county maps coloured to show geological strata, issued in parts of 3 maps each from 1819 through 1824. Smith may have planned to sell the general map of England along with the completed series, however, due to lack of funds the atlas project was never completed. The printed title label on the slipcase states that the present map was ​“intended as an elementary map for those commencing the study of geology”.

Rare we are only able to trace ten institutional examples.

From the library Pierre-Alphonse Julien (1838–1905), a French geologist who held the first chair of mineralogy in the University of Clermont-Ferrand and specialized in vulcanology.