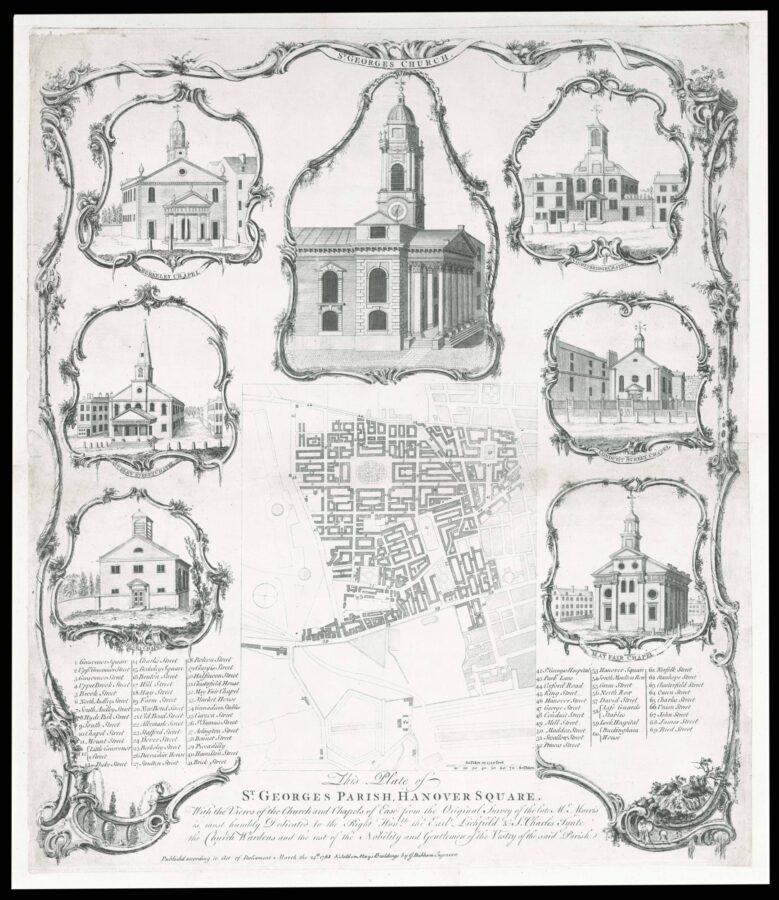 This Plate of St. Georges Parish, Hanover Square. With the Views of the Church and Chapels of Ease from the Original Survey of the late Mr Morris is most humbly Dedicated to the Right Hon.ble the Earl Lichfield & Sr Charles Tynte the Church Wardens and the rest of the Nobility and Gentlemen of the Vestry of the said Parish.

The plan bears a great deal of rococo decoration which not only encloses much of the map, but also the seven views of the parish churches and chapels of ease. Above the plan is a view of St. George’s Hanover Square; to the left views of Berkeley Chapel, Audley Street Chapel, and Chelsea Chapel, and to the right Knightsbridge Chapel, Conduit Street Chapel, and Mayfair Chapel. Below is a key together with a scale-bar, the imprint, and a dedication.

St. George’s Church was built in 1721–4 to the designs of John James and at a cost of £10,000, as one of fifty churches projected by Queen Anne’s Act of 1711. The parish for the new church was carved out of St. Martin-in-the-Fields and covered what are now the areas of Mayfair, Belgravia and Pimlico. The church itself was the site of many high-profile weddings, including those of the future American President Theodore Roosevelt and the architect John Nash. George Frederick Handel was a frequent worshipper at St. George’s, which is now home to the annual Handel Festival.

Audley Street Chapel, now Grosvenor Chapel, was built in 1730–31 by Benjamin Timbrell, and was where American servicemen worshipped during World War II. It is mentioned in John Summerson’s Georgian London: ​“The chapel-of-ease in South Audley Street is, externally, an unattractive building in brown brick and stone, though the interior has merit… It is very much a craftsman’s church… it is more like some of the churches of Maine, Connecticut and Massachusetts than the other London churches of the time.” Berkeley Chapel, which dates from around 1750, was pulled down in 1907 and replaced with Charles House.
Knightsbridge Chapel began as a chapel on Knightsbridge Green attached to a leper hospital founded by Westminster Abbey. The chapel was rebuilt in 1629, further rebuilt in 1699, and renovated again in 1789. A new church, Holy Trinity Knightsbridge, was erected on its site in 1861. In 1901 it was demolished and rebuilt on a new site in Prince Consort Road, where it is still open.

Conduit Street (or Trinity) Chapel, is built on the site of a wooden field chapel built by James II. It was conveyed on wheels to wherever the king travelled, to be used for his private masses. In 1686 it was in his camp at Hounslow Heath, where it stayed until some time after the Revolution. It was then removed to Curzon Street, where it was later rebuilt in more durable materials and used a chapel by the neighbouring inhabitants. The chapel was demolished in 1875. Mayfair (later named Curzon) Chapel was first erected in 1730, and was the location of numerous clandestine marriages, before the Marriage Act of 1753, including those of the Duke of Chandos and Mrs. Anne Jeffrey in 1744. The chapel was pulled down in 1899 and replaced by Sunderland House, built for the 9th Duchess of Marlborough.

Extremely rare; we are only able to trace one institutional example, in the British Library.