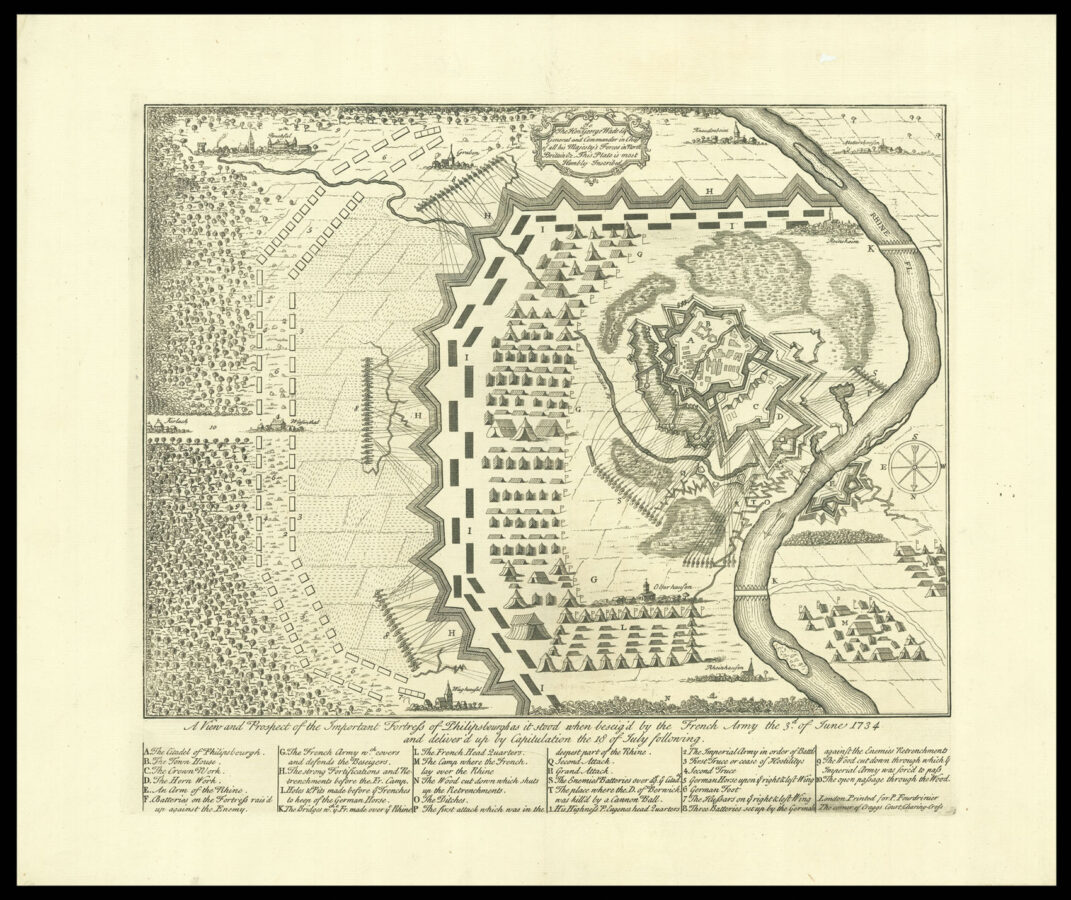 A View and Prospect of the Important Fortress of Philipsbourgh as it stood when besieg’d by the French Army the 3.d of June 1734 and deliver’d up by Capitulation the 18 of July following…

Paul Fourdrinier (1698–1758) was a French Huguenot refugee who settled in London in about 1718; there he found employment as an engraver, map- and printseller and publisher.

The disputed succession to the Polish throne, with France supporting one claimant and Austria supporting the other, gave the French the opportunity to attack Austrian possessions along their border in 1733. In 1734 a French army laid siege to Philippsburg. Aware that an attack was imminent, the garrison commander, Gottfried Ernst von Wuttgenau, appointed in December 1733, did much to improve the defences, but his limited resources, both in terms of manpower and ammunition, left him in a precarious position. The siege began on 26th May; the French methodically began constructing siege-works and by the middle of July had pierced the outer defences. With no hope of being relieved, Wuttgenau surrendered on the 18th.

Fourdrinier’s plan was advertised in the Daily Courant (issue 5797 [sic]) for 1st November 1734 as ​“This Day is publish’d (Price One Shilling.) …” with the comment “… Curiously engraved upon a large Copper Plate from an Original Draught taken upon the Spot, and transmitted from Frankfort to the Court of Great Britain. …“

The single-sheet of letterpress text, issued as a companion to a plan of the siege of Philipsburg, was printed by James Roberts, John Senex, Samuel Harding, John Brindley and James Stagg in London in 1734. In the London Evening Post (issue 1029) for 22nd — 25th June, 1734, the partners listed above promised,
”… Next Monday [1st July] will be publish’d, in the same Manner, and at the same Price, The Town and Fortifications of Philipsbourg, with the French Attacks, together with a printed Account of the Siege.“

However, it was only in issue 1035, for 4th — 6th July, that they announced:
​“This Day is published, (Price One Shilling) THE PLAN of the Town and Fortifications of Philipsbourg, together with the French Attacks; and with it shall be given a printed Sheet, containing an Account of the Siege Day by Day, from the opening of the Trenches to the taking of the Hornwork; with References to the Plan. …”.

Both plan and text are rare; ESTC records only a single copy of the text-sheet, in the Huntingdon Library (without the map) and no exemplar of the map. Indeed, the only exemplar of the map encountered (complete with the letterpress page, in this setting) was also previously in the Macclesfield Library at Shirburn, and sold at Sotheby’s (Macclesfield Library Part Nine: Voyages, Travel and Atlases, 15th March 2007, lot 4153), as part of a composite atlas of battle plans and the like. 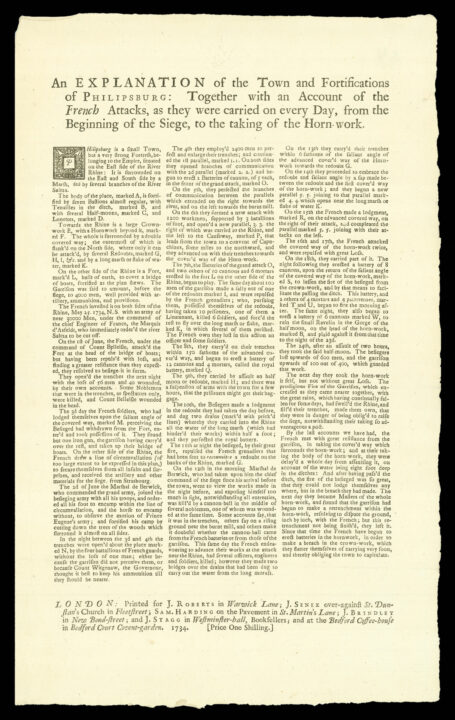