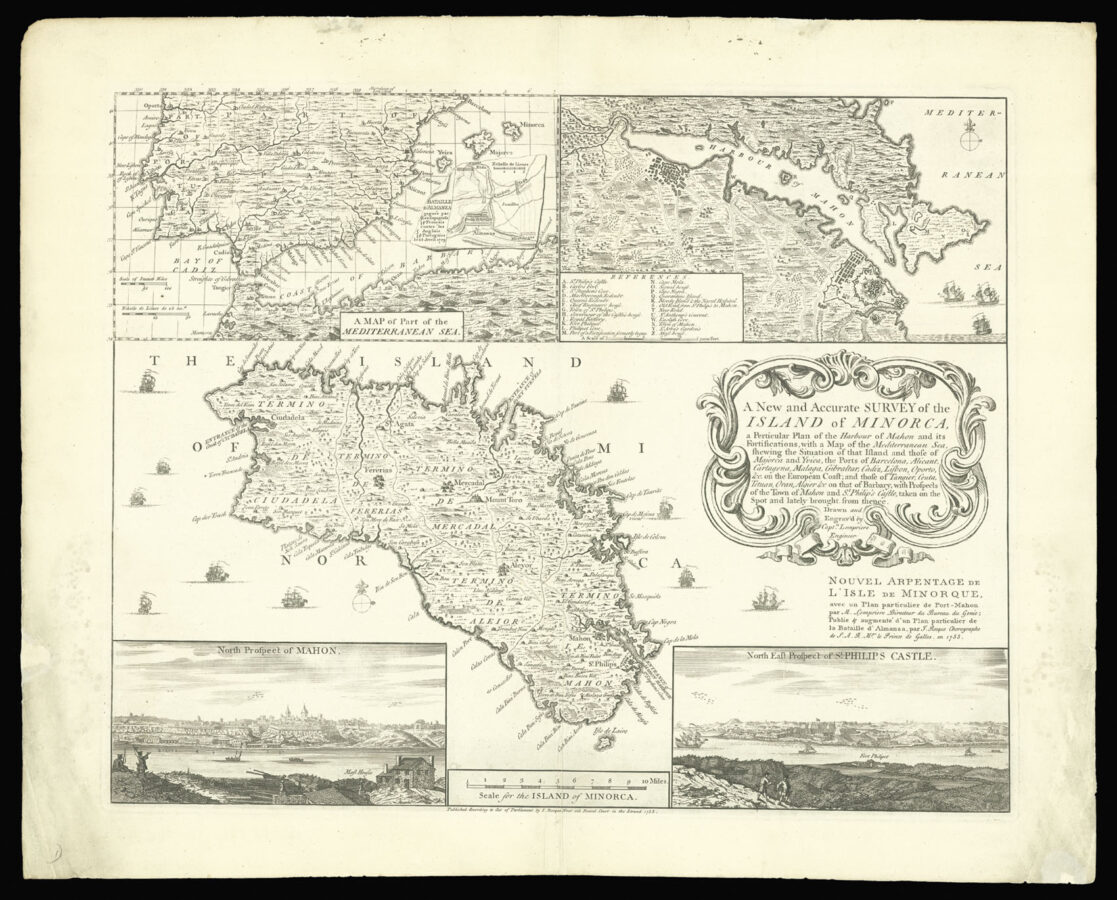 A New and Accurate Survey of the Island of Minorca, a Perticular Plan of the Harbour of Mahon and its Fortifications… with Prospects of the Town of Mahon and St. Philip’s Castle… Drawn and Engraved by Capt. Lempriere.

The map sheet consists of a map of Spain, a plan of Mahon Harbour, a map of Minorca, and prospects of Mahon and St Philps’ Castle. The map of the Island, on a scale of 1 1/3 miles to the inch, shows towns, villages, roads, rivers, administrative boundaries, and coastal features. At the time of works publication Minorca was under British rule. The British had gained control of the island in 1708, during the Wars of Spanish Succession.

The map was first published by Lempriere 1746 and sold by Stephen Austen at his bookshop in Newgate Street; with the death of Lempriere in the same year, and Austen in 1750, the plates, where acquired by John Rocque, who published a new edition in 1753 — the present example. For this new edition Rocque has removed Austen’s imprint, added text below the cartouche regarding the Battle of Almanza (Almansa fought on 25th April 1707), and engraved a plan of the battle in the sea to the east of Spain. The Battle was disaster for the English and Portuguese forces, and the Spanish and French forces victory assured them control of most of Spain. Britain’s capture of Minorca in the following year was somewhat of a consolation prize.

Captain Clement Lempriere (1683–1746) was a military engineer, draughtsman, cartographer and engraver, whose most important work was the draughtsmanship for Henry Popple’s majestic map of the British Colonies of North America, published in 1733. Born in Jersey in 1683, he served with the British Army, attached to the Corps of Engineers, and in 1741 was appointed Chief Draughtsman at the Tower of London at a salary of £100 per annum. He died 9th July 1746.