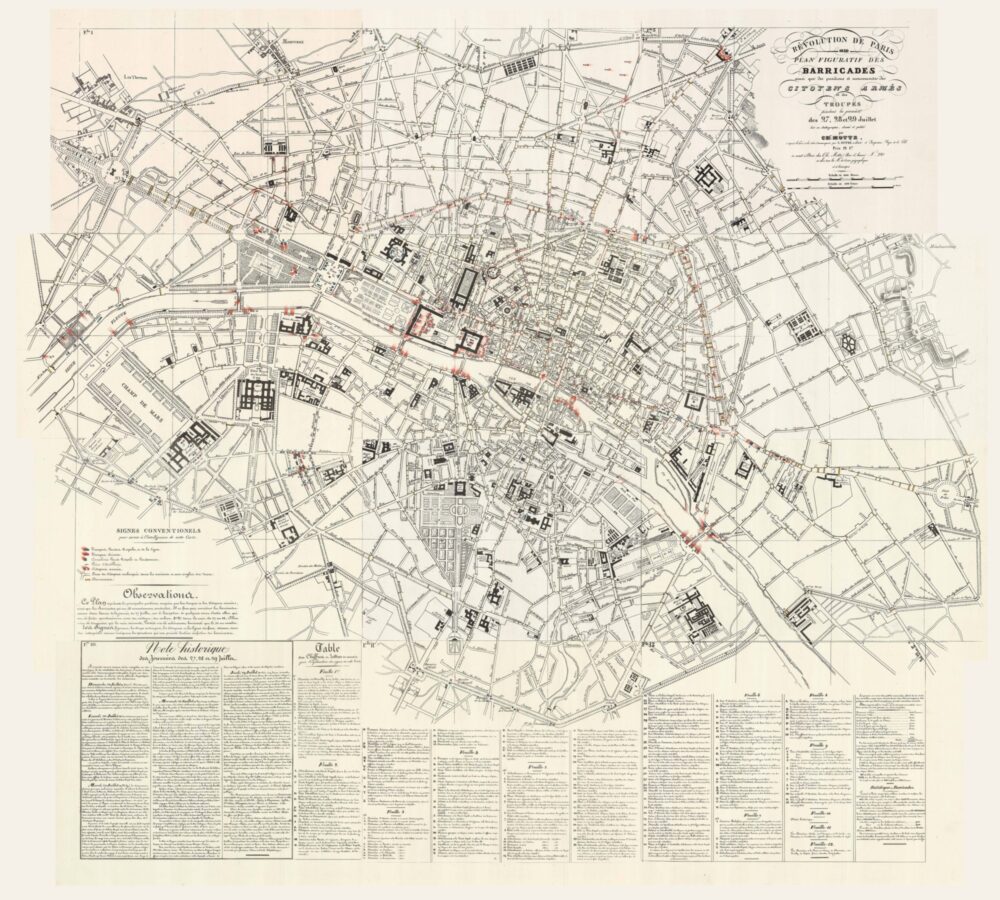 Rare map of Paris documenting the July Revolution published shortly after the conflict. The uprising, triggered by the restrictive reforms established by King Charles X, lasted for three days ‑the Trois Glorieuses- and took over the entire city of Paris. In it, working- and middle-class citizens fought against the royal army, forcing Charles X to abdicate and proclaiming his cousin Louis Philippe ​‘king of the French’.
It offers a detailed plan of the city, highlighting the main locations where the fight unfolded, such as the Louvre and its surrounds. The hand-painted details in red, white, blue and yellow are extremely suggestive, offering a glimpse of its intensity. In addition, the immediacy of its publication makes this a crucial historical record of the revolution.
The painted details show the positions of the armed citizens and troops as well as the locations where barricades were set and ambushes took place during the three days of fight. Shootings and gunfire are marked in red, barricades are represented by yellow bars, and the different parties are differentiated by colours. The royal troops are identified by black and blue rectangles (alluding to their official uniforms) while the armed citizens are represented by the patriotic tri-coloured red, white and blue flag.
The map is accompanied by explanatory text and the source. It includes historical notes on the period July 25–29 and a table with specific data structured by leaf. The notes are based on the information collected on site by the architect Louis Dupré (1789–1837), who is mentioned in the title.
The map was included in the volume ​‘Un mois de 1830’ (Paris, Bulla 1830–1831) alongside a series of lithographs by Victor Adam (1801–1867) and commentaries in English and French by the poet Pierre-Joseph Charrin (1784–1863). It was also sold individually at the home of Motte on 290, Rue S. Honoré and most print-shops in Paris. Motte (1784–1836), who had become a well-established lithographer, printer and publisher in France, expanded his business in 1830, opening his first shop in London on 23, Leicester Sq. Interested in a wide variety of subjects, he continued to express his loyalty to the July Revolution throughout his career by signing his works as ​‘éditeur lithographe du roi [Louis-Philippe] et du duc d’Orléans’.
We have been able to find only one institutional example in the UK (The British Library), two in France (Archives de Paris and Bibliothèque nationale de France) and one in Germany (Staatsbibliothek zu Berlin).