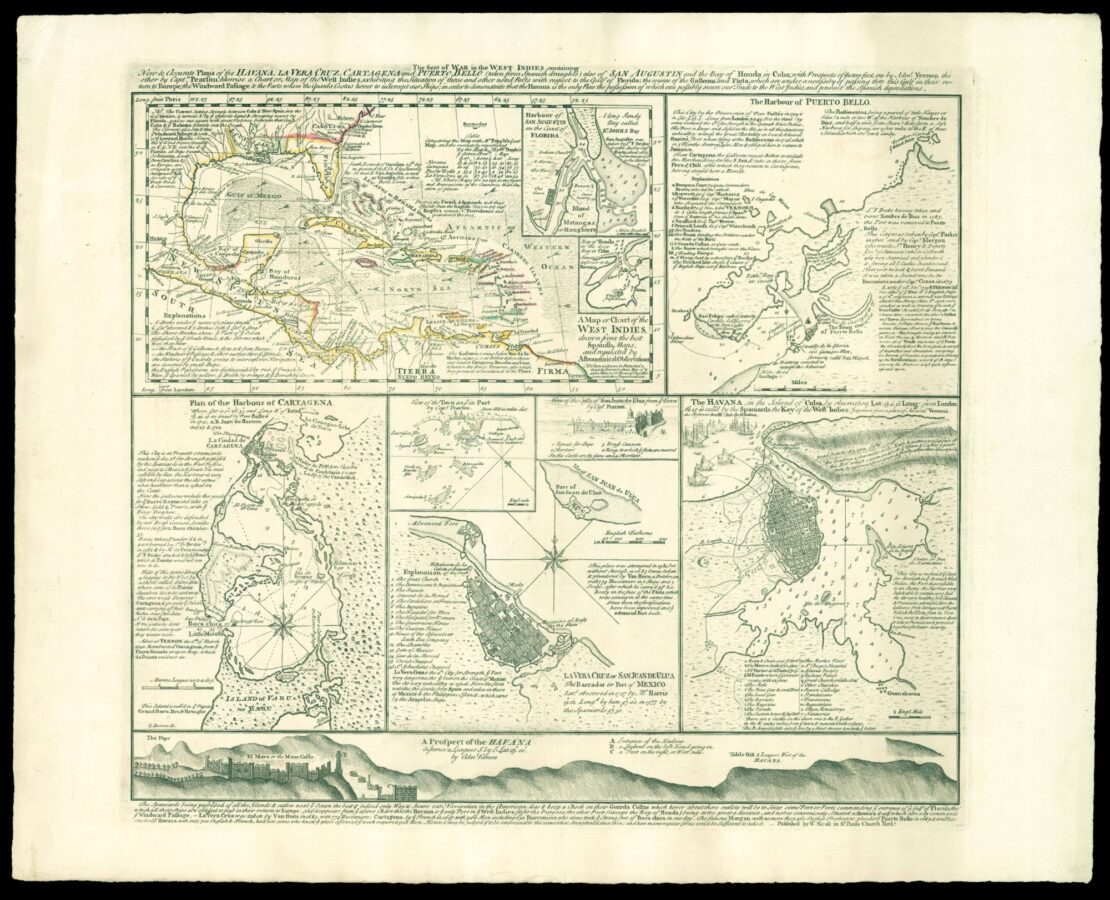 Rare map published during the War of Jenkin’s Ear

The Seat of War in the West Indies containing New and Accurate Plans of the Havana, La Vera Cruz, Cartagena and Puerto Bello (taken from Spanish Draughts)

Rare separately issued edition, published during the Seven Years’ War by William Nicoll, first issued during the War of Jenkin’s Ear. At the upper left is a general map of the West Indies, and the other nine plans and views show important ports throughout the region, each is annotated with details of the defences and their military history:

​“A Map or Chart of the West Indies, drawn from the best Spanish Maps, and regulated by Astronomic Observations”, with insets of the ​“Harbour of San Augustin on the Coast of Florida”, and the ​“Bay of Honda or the Deep Bay in Cuba”, ​“The Harbour of Puerto Bello”, ​“Plan of the Harbour of Cartegena”, ​“La Vera Cruz or San Juan de Ulua, The Barrador or Port of Mexico” with insets of the towns and harbours of Vera Cruz and San Juan de Ulua, ​“The Havana, in the Island of Cuba,…” and ​“A Prospect of the Havana” as a panorama across the bottom of the whole

The plan at the upper right corner shows Porto Bello, where the British had won a famous victory in 1739. Admiral Vernon took part in a failed attempt to stop a Spanish treasure fleet sailing from Porto Bello in 1727, and subsequently claimed that he could take the port with just six ships. He was given the Jamaica command, and launched an expedition to Porto Bello in 1739, occupying the town for three weeks and destroying it as a viable port. The British accomplished the occupation with only three lives lost.

Cartagena is included as an important stop on the Spanish bullion route (Vernon had failed to capture the town just before he took Porto Bello). St Augustine in Florida appears because of the part in played in General Oglethorpe’s invasion of Florida. He took two settlements in the St John’s River before being repelled by the defenders in St Augustine in 1740.

The plan of Havana below has been ​“improved from a plan of Admiral Vernon’s” and is accompanied by a coastal view: ​“this particular combination of hydrographic chart and narrative coastal profile” was often used in publications urging military action and showing the potential gains (Mancini). The religious settlements in Havana are carefully outlined. Given that they are Catholic institutions, they are not of any spiritual interest to a British audience; they represent the richest and most poorly guarded places on the island.

The text underneath the images explains that ​“the best and indeed only way to secure our navigation in the American seas … will be to seize some port or ports commanding the entrance of the Gulf of Florida … and it appears from the above chart that Havana is the only port in the West Indies fit for the purpose”.

The map was reissued in connection with the 1762 Battle of Havana, when the British held the city under siege for two months before it finally surrendered on 11 August. The capture of Havana, along with that of Manila shortly after, gave the British control of the capitals of the East and West Indies, and was widely celebrated in Britain. Their return in the 1763 Treaty of Paris contributed to the Treaty’s unpopularity.

Rare; there is only one institutional example of this edition, held at the University of Texas.