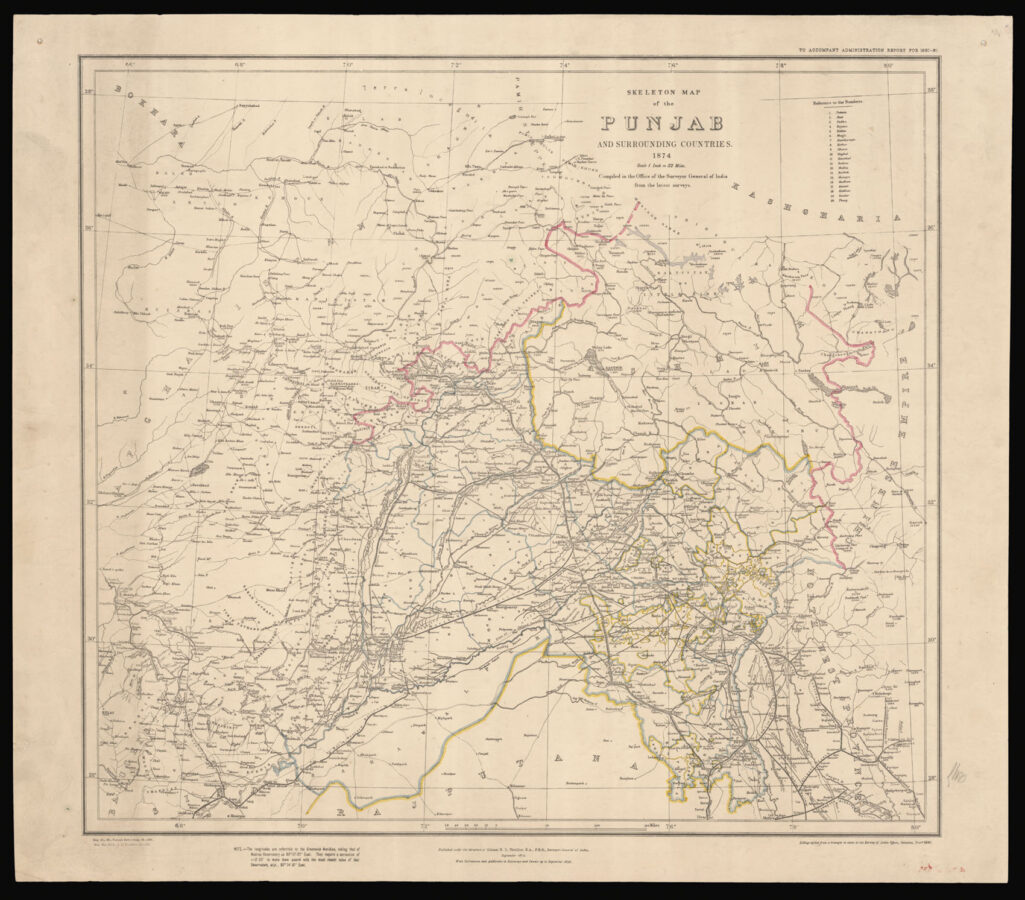 Rare map of the Punjab marking the border between the British Raj and Afghanistan, the year before the creation of the Durand Line

Skeleton Map of the Punjab and Surrounding Countries 1874 Compiled in the Office of the Surveyor General of India form the latest surveys.

The map shows the whole of the newly formed Punjab Province, formerly the territory of the Sikh Empire, which had been annexed by the British East India Company in 1849, following the Second Anglo-Sikh War. The province would later be transferred to the British Crown after the dissolution of E.I.C. rule, in 1859. By the middle of the 1880s the British administration had begun to construct numerous irrigation canals, and railways, in west and central Punjab in order to increase productivity and revenue. The present map, which was intended to accompany the 1892–93 administration report, shows the progress that had been made in the last ten years. The text below states that the map has been updated with ​“corrections and additions to Railways and Canals up to September 1892.“

As well as the latest improvements to the railways and canals, the map also shows several border lines. The the most important of which begins in the Karakoram mountain range as a dotted red line, which becomes a continuous line some 60 miles in. The manuscript red line follows the printed dotted and dashed line past Peshawar, ending at Bannu (Pakistan). The line then changes from a solid red line to a blue dashed line, ending at Tank The printed line continues as a faint dotted line, following the Indus River to the east all the way to D G Khan; with the manuscript border line reappearing briefly above Shikarpur.

At the time of the maps publication the border between Afghanistan and British India had not been delineated. Absence of a formal border had begun to cause problems for the British, especially with the hill tribes east of the of the Indus, who continued to raid villages under British rule. This unrest, coupled with Britain’s fear of further Russian encroachment into Afghanistan, led them to send Sir Mortimer Durand, in 1893, to Kabul in order to seek a border settlement with Abdur Rahman Khan, Emir of Afghanistan. An agreement was signed on the 12 November 1893; with the border being surveyed and demarcated between 1894 to 1896. The subsequent border became known as the Durand Line, and although it satisfied the British need for a formalised buffer between British India and Russia, it would sow — with the way in which it arbitrarily divided ethnic groups, especially the Pashtuns — the seeds for the area to become one of the worlds most dangerous borders. Even to this day, although the line is recognised by The United Nations as the western border of Pakistan, it remains largely unrecognised by Afghanistan. In 2017, amid cross-border tensions, former Afghan President Hamid Karzai said that Afghanistan will ​“never recognise” the Durand Line as the international border between the two countries.