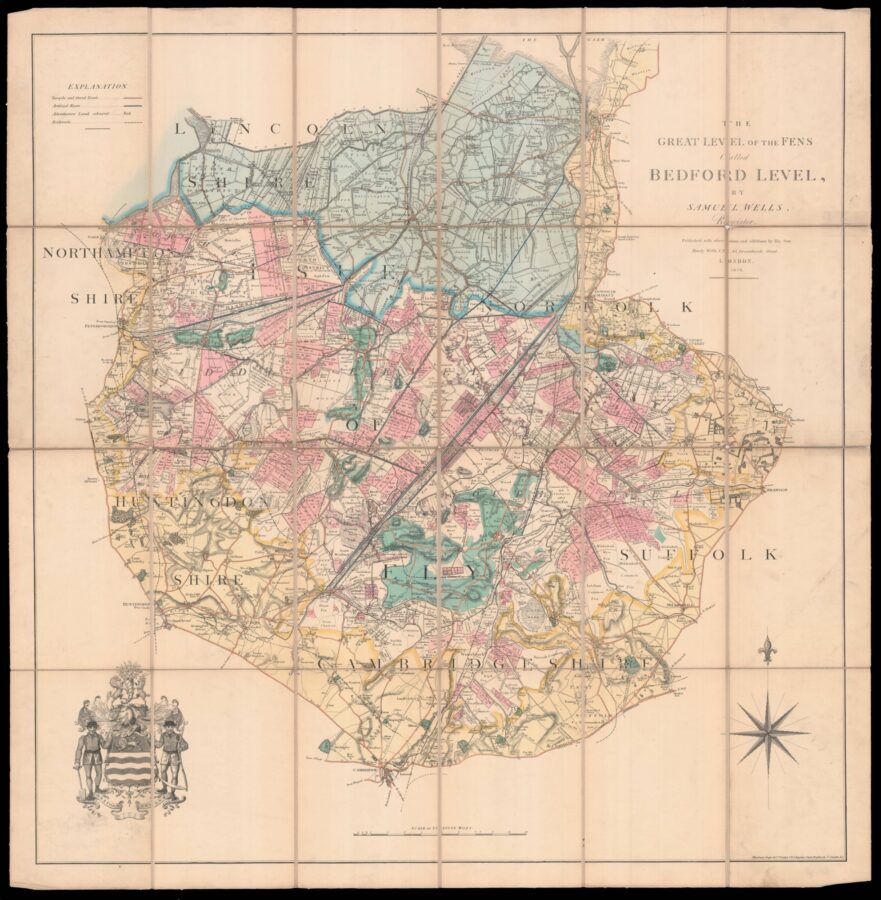 The Great Level of the Fens Called Bedford Level, by Samuel Wells, Register.

A map of the Bedford Level, also known as the Great Level, was the area drained in the Fens in Cambridgeshire following the formation of a consortium by Francis Russell, 4th Earl Bedford. The arms of the Company are at the lower left corner, with the motto ​“Arridet Aridum”, or ​“Dryness pleases”. The work was originally overseen by Sir Cornelius Vermuyden, a Dutchman who had already managed the drainage of the Royal Park at Windsor. The Old Bedford River and the New Bedford River were cut to join the River Great Ouse to the sea. The project was ultimately ineffective, and was restarted in the 1820s with steam pumps replacing the wind pumps used previously.

The map, drawn by Samuel Wells, register (or registrar) with the Bedford Level Company, was first published in 1829. Wells would published an official history of the organisation in 1830. The map provides a wealth of information and shows turnpike and gravel roads, artificial rivers, Adventurers lands (coloured red) i.e. the principal investors in the project — what would now be known as venture capitalists; Free lands (uncoloured); islands and highlands within the Level (green); fen and marshland without the Level (blue); and highlands out the Level (yellow). The present map is an example of the 1878 reissue published by Samuel’s son Hardy Wells. Although Hardy has kept the colour coding, the key to the upper left has been reduced to listing roads, rivers, Adventurer’s land and railroads.

Rare we are only able to trace one institution example of the present map in Nottingham University Library.