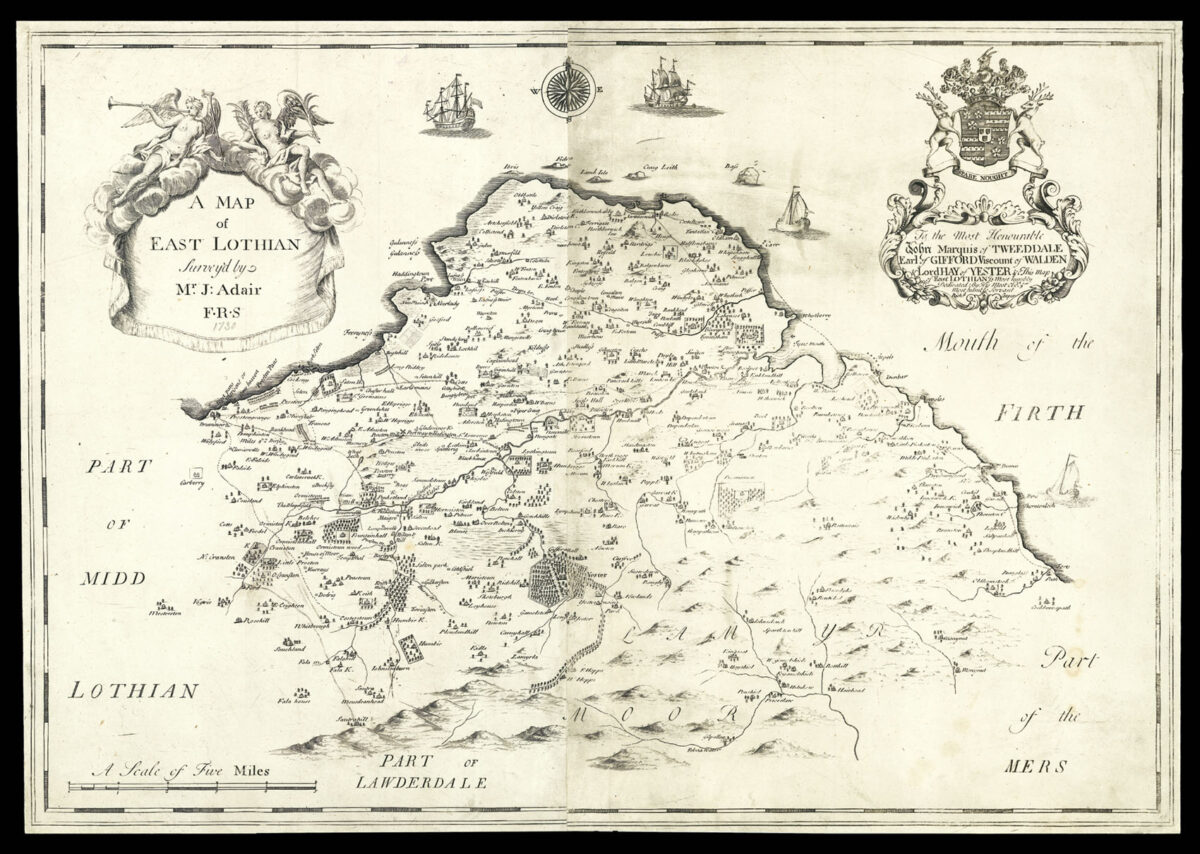 A Map of East Lothian Survey’d by Mr J: Adair F.R.S. To the Most Honourable John Marquis of Tweeddale Earl of Gifford Viscount of Walden & Lord Hay of Yester &[c]. This Map of East Lothian is most respectfully dedicated by his most Obdt. and Humble Servant Rich[ar]d Cooper.

An exceptionally rare and significant map of the East Lothian in Scotland. The map stretches from Preston Pans in the west to Cockburnspath in the east. The map may have been amongst charts and maps acquired by Edinburgh engraver Richard Cooper when mapmaker and hydrographer John Adair died in 1718 aged about 58, leaving his family ​“in very poor and necessitous circumstances”. Adair is now best known for his series of regional maps of Scotland surveyed in the 1680’s under the auspices of Robert Sibbald as part of a proposed national survey, of which the marine element was published as ​‘A Description of the Sea Coast and Islands of Scotland in 1703’. His survey work appears to have been constrained and frequently held back by regular financial difficulties.

The most prominent features of the map are the two cartouches, the title piece upper left embellished with winged female figures, one holding two trumpets, and the other corn. In the upper right, the dedication to John Hay (1695–1762), 4th Marquis of Tweeddale, whose coat-of-arms surmount the cartouche. Tweeddale was a prominent politician during the first half of the eighteenth century, holding the office of Secretary of State for Scotland, Governor of the Bank of Scotland, and Lord Justice General.

The original manuscript by John Adair, that the present map is based upon, now resides in the National Library of Scotland, and bears the date 1682. The Bodleian contains an engraved example with a different title, ​“The Mappe of East Lothian, surveyed and designed by John Adair Math.”; the work is dedicated to George Seaton, Earl of Winton, and does not bear Ricahard Cooper’s name. The map can be dated to between 1682 and 1715, as George Seaton, a prominent member the the Jacobite uprising of 1715, was captured and exiled in 1716. This would also explain Richard Cooper’s wish to rededicate the map, to a less controversial figure.

Rare we are only able to trace four institutional examples of the map: in the National Library of Scotland; and the British Library; the Society of Antiquaries, Edinburgh; and the Signet Library, Edinburgh.