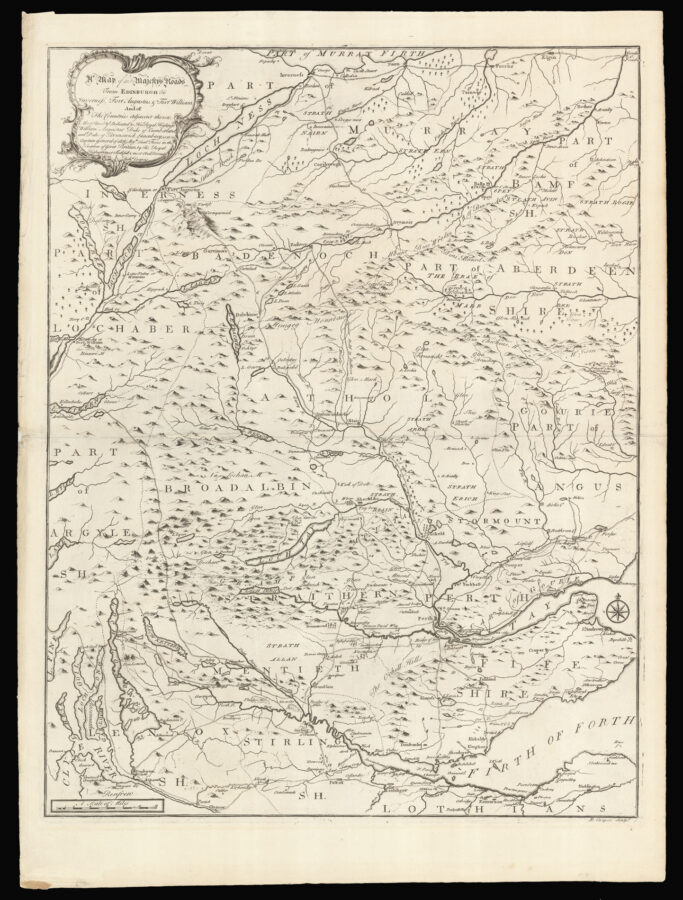 Rare map of central Scotland published during the Jacobite rebellion

A Map of His Majesty’s Roads from Edinburgh to Inverness, Fort Augustus & Fort William and of the counties adjacent thereto. Most humbly dedicated to His Royal Highness William Augustus Duke of Cumberland, and Duke of Brunswick Lunenberg &c. &c. &c. Captain General of all His Maj[est]ies Land Forces in the Kingdom of Great Britain by His Royal Highness’s most Faithfull & most Obedient Servant R[ich]ard Cooper.

The map extends north to south from Inverness to Edinburgh, and west to east from Fort William to the mouth of the river Tay. The depicts in great detail the roads from Edinburgh to Inverness, Fort William, and Fort Augustus. The forts, including Fort George at Inverness were the three key Hanovarian strong points along The Great Glen. The Jacobites had taken Fort George in February of 1746, and Fort Augustus in March. The Jacobites would go on to lay siege to Fort William until the quashing of the rising in April.

Richard Cooper (?1701–1764) was a draughtsman, painter, engraver and publisher working in Edinburgh. Born in London he studied under John Pine, one of the leading engravers in Georgian London. In 1729, after touring Italy he accompanied the Scottish artist Alexander Guthrie to Edinburgh, where he founded the Edinburgh School of St Luke, the earliest academy for artists in Scotland, and the Edinburgh school of engraving.

Rare we are only able to trace three institutional examples: the BL; the NLS; and Harvard College Library.