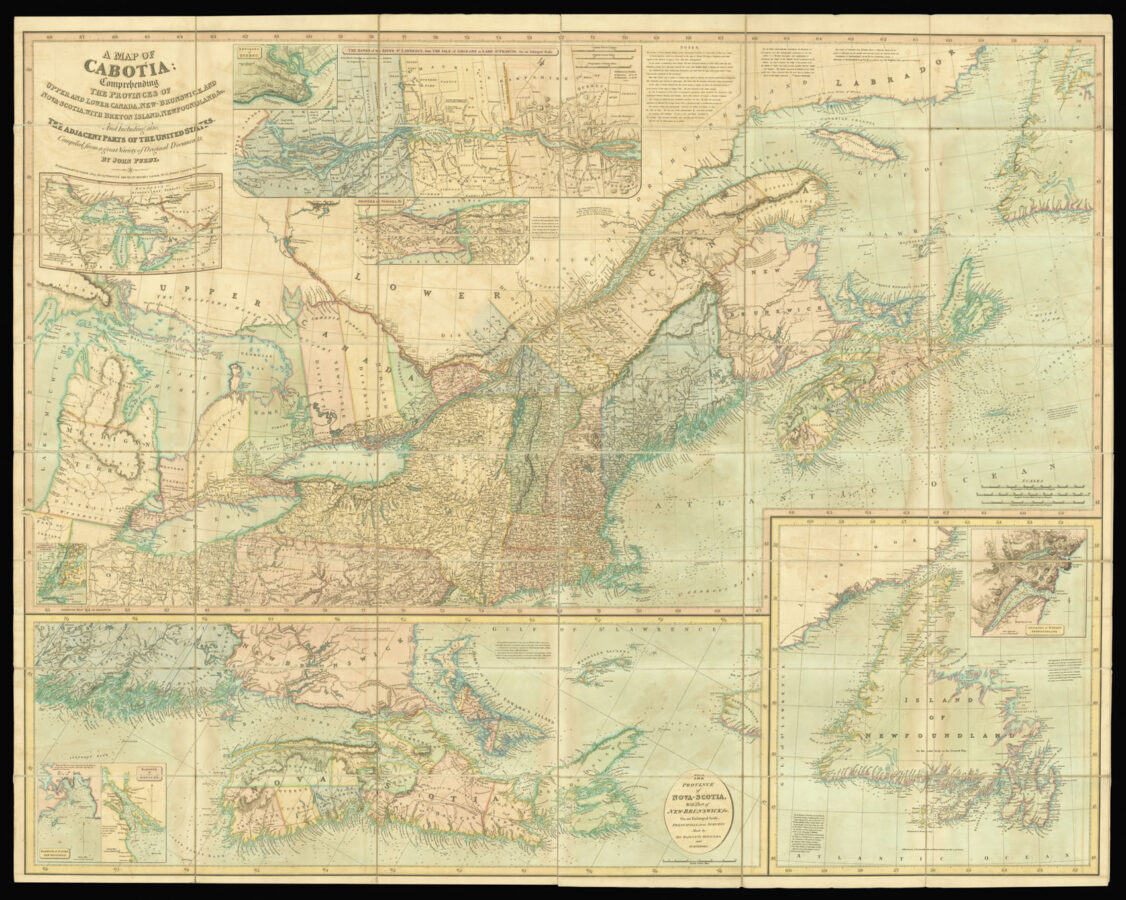 A MAP OF CABOTIA; Comprehending THE PROVINCES OF UPPER AND LOWER CANADA, NEW-BRUNSWICK, AND NOVA-SCOTIA, WITH BRETON ISLAND, NEWFOUNDLAND, &C. And Including also THE ADJACENT PARTS OF THE UNITED STATES. Compiled from a Great Variety of Original Documents. BY JOHN PURDY…. Improved Edition, with Additions, 1818.

First issued in 1814, Purdy’s Cabotia was for its time the largest-scale and most detailed map of the region. It is a tour de force of compilation and synthesis from sources including maps by Cary, Chewitt, Des Barres, Holland, Jefferys, Smythe and others (Malinksi, pp. 86ff)

The map is exceptionally detailed, especially in its treatment of the lands adjacent to the St. Lawrence River, the much-disputed U.S.-Canada boundary, and roads and settlements throughout. One of the more interesting features is the contrast between the narrow ​“seigneurial” grants reflecting the quasi-feudal system established by the French along the St. Lawrence, and the ten-by-ten-mile townships established by the British after their capture of New France.

The map also includes eight insets, most being larger-scale maps of important regions such as the Maritimes, the St. Lawrence Valley, and the Niagara frontier. Numerous notes offer Purdy’s own opinions (regarding for example the ​“the injudicious application of the name of St. John to three places”); recommendations (e.g., for a light house on Sable Island); and a long biographical note about the eponymous John and Sebastian Cabot. The example offered here is particularly striking, being the only one this writer has encountered in full original color

This example is also remarkable for representing a hitherto unknown second state published with significant alterations in 1818. An unsystematic comparison with the Rumsey’s 1814 first edition reveals a number of changes, including an almost complete re-engraving of Ohio; additions in Erie County, Pennsylvania; re-engraving along the river in St. Lawrence County, New York; additional topography in northern Maine; a corrected location for Quako on the north shore of Bay of Fundy and the addition of Quako Ledge; a corrected location of Arbushee on St. George’s Bay in Nova Scotia; Lake Tomiscanning on the Ottawa River changed to ​“Lake Temiscaming or Tomiscanning;” and the River St. Maurice drawn in much greater detail.

The map is free of explicit political or geopolitical commentary, but its initial publication during the War of 1812 and the unusual choice of geographical coverage invite interpretation. The map may have been intended for use by British administrators and war planners, and/​or by its commissioners at Ghent for reference during the complicated negotiations. A more provocative interpretation–though this writer has so far found no evidence directly supporting it—is that Purdy was subtly emphasizing the geographic unity of the region and raising the possibility of a ​“Greater Cabotia” incorporating much of the northeastern United States.

Purdy’s map was of sufficient importance that it was reissued in 1821, 1825, 1828 (twice), 1838 and, after the maker’s death, in 1850. In the final two states the title was changed to Map of the Vice-Royalty of Canada, the name ​“Cabotia” apparently no longer useful in selling the map.

John Purdy (1773–1843)
The Dictionary of National Biography has this to say about Purdy: “…hydrographer, the son of a bookseller at Norwich, was born in 1773. He early turned his attention to the study of naval charts and similar subjects. Before 1812 he succeeded De la Rochette as hydrographer to Messrs. Laurie & Whittle, of 53 Fleet Street, London, and in that year published a ​‘Memoir, descriptive and explanatory, to accompany the New Chart of the Atlantic Ocean,’ 4to…. Purdy does not seem to have taken part in hydrographic expeditions himself, and his work consisted in writing works and constructing charts based upon the reports of others; but eventually he became the foremost authority of his time on hydrography. He was mainly instrumental in bringing ​‘Rennell‘s Current’ before the notice of navigators, and in 1832 Rennell‘s daughter, Lady Rodd, entrusted to Purdy the editing of his ​‘Wind and Current Charts’…. He died on 29 Jan. 1843.“

In addition to several volumes on navigation, Purdy produced charts and maps covering many parts of the world. ​“A fairly complete list of Purdy’s maps and charts is given in the ​‘Catalogue of the Map Room of the Royal Geographical Society.’ The chief are: a chart of the Atlantic Ocean (1812); a ​‘map of Cabotia, comprehending the Provinces of Upper and Lower Canada,’ &c. (1814); a map of the world on Mercator‘s Projection (1825); The Azores (1831); Jamaica (1834); the Viceroyalty of Canada (1838); Newfoundland (1844). Others published by Findlay, after Purdy‘s death, include the Indian and Pacific Oceans (1847); St. George‘s Channel (1850); the coasts of Spain and Portugal (1856). His nephew Isaac published a chart of the coasts of China in 1865.” (Albert Frederick Pollard, ​“John Purdy,” in Dictionary of National Biography, vol. 47)