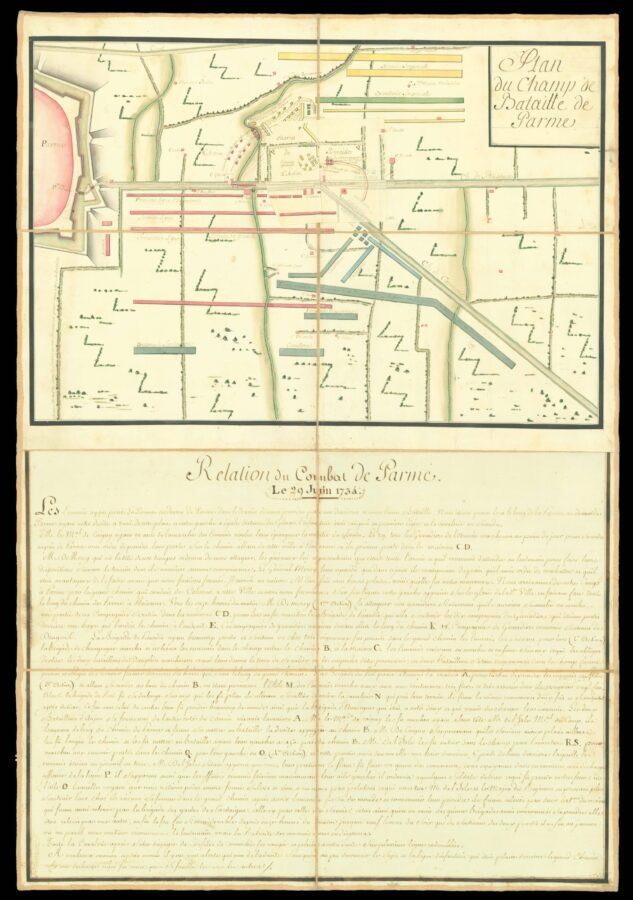 Rare manuscript plan of the battle of Parma 1734.

Plan of the French camp and Battle of Parma, in 1734, during the Italian campaign of the War of Polish Succession.

The Battle of Parma, also known as the Battle of Crocetta or the Battle of San Pietro was a battle fought on June 29, 1734, between troops of France and Sardinia on one side, and Habsburg Austrian troops on the other, as part of the War of Polish Succession, between the village of La Crocetta and the city of Parma, then in the Duchy of Parma. Austrian troops assaulted an entrenched Franco-Sardinian position, and were ultimately repulsed, due in part to the death of their commander, Florimund Mercy, and the wounding of his second in command, Frederick of Württemberg. Both sides suffered significant casualties in the battle, which lasted for most of the day.

The Austrian army is depicted to the north with the infantry marked yellow, and the cavalry green. The French army lie to the south with the cavalry and dragoons blue, and the infantry red. The plan shows the first, third, and forth phases of the battle, with a manuscript over-slip showing the second. A note below the plan provides detailed information about the battle.