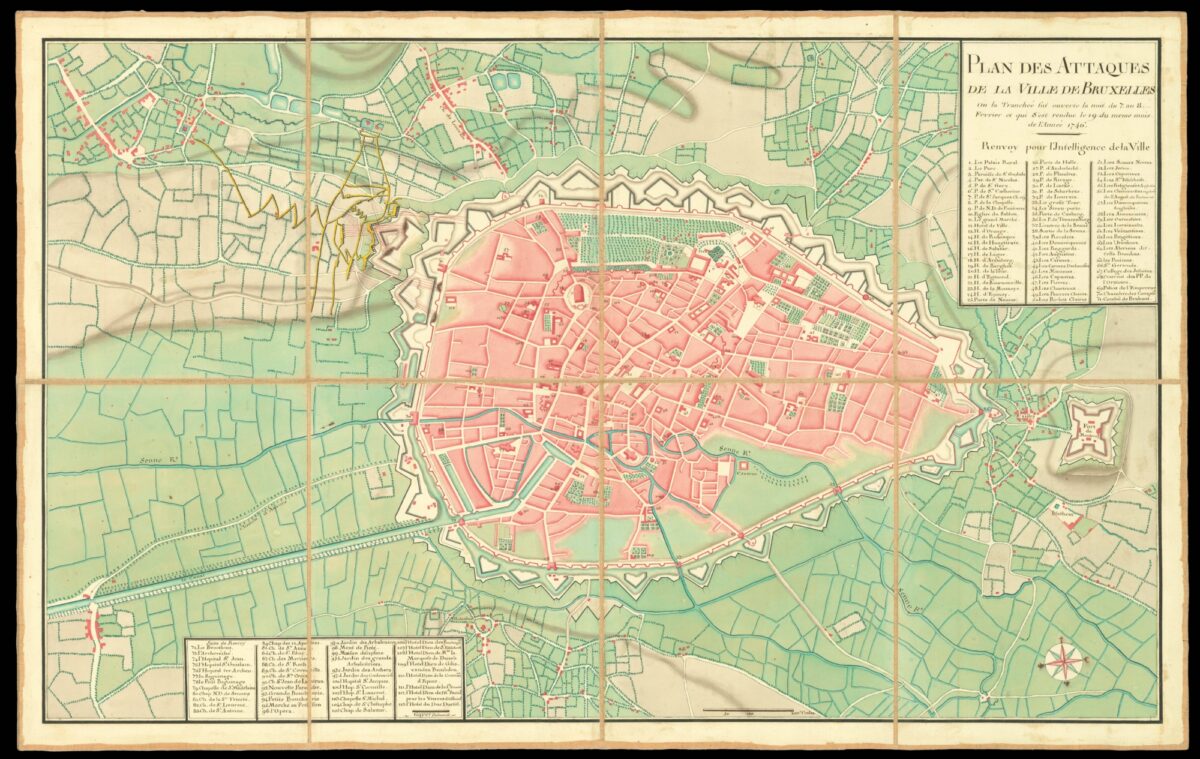 Large plan of the Siege of Brussels in 1746.

The plan renders the city and the surrounding area in great detail, depicting rivers, canals, fortifications, field boundaries, street, gardens, and principal buildings. A key plan lists 113 buildings, gateways, and defensive points. To the left of the plan the French trenches are highlighted in yellow, with the range and direction of the artillery in red.

The Siege of Brussels took place between January and February 1746 during the War of the Austrian Succession. A French army under the overall command of Maurice de Saxe, in a bold and innovative winter campaign besieged and captured the city of Brussels, which was then the capital of the Austrian Netherlands, from its Austrian garrison.

The French were boosted by the fact that a large part of the Allied army was forced to return to Britain where a Jacobite Rising of 1745 had broken out and Bonnie Prince Charlie had won a stunning victory at the Battle of Prestonpans. This left very few troops to actively oppose the French forces. After the French made two breaches in the walls of Brussels, the Austrian defenders were compelled to surrender on 22 February in a siege that lasted just three weeks.

The governor of the Austrian Netherlands, Count Kaunitz, was forced to withdraw his administration north to Antwerp. The siege severely damaged his view of Austria’s allies, principally Britain and the Dutch Republic, who he considered had done virtually nothing to protect Brussels from the French. A decade later Kaunitz would be one of the architects of the Franco-Austrian Alliance in which Austria abandoned its former alliance with Britain and joined with its traditional enemy France.

The French followed up the capture of Brussels by taking other key cities and fortresses in the Austrian Netherlands including Mons and Namur. Brussels remained under French occupation until it was returned to Austria by the 1748 Treaty of Aix-la-Chapelle along with the rest of the Austrian Netherlands, although it was January 1749 before the French finally evacuated the city.