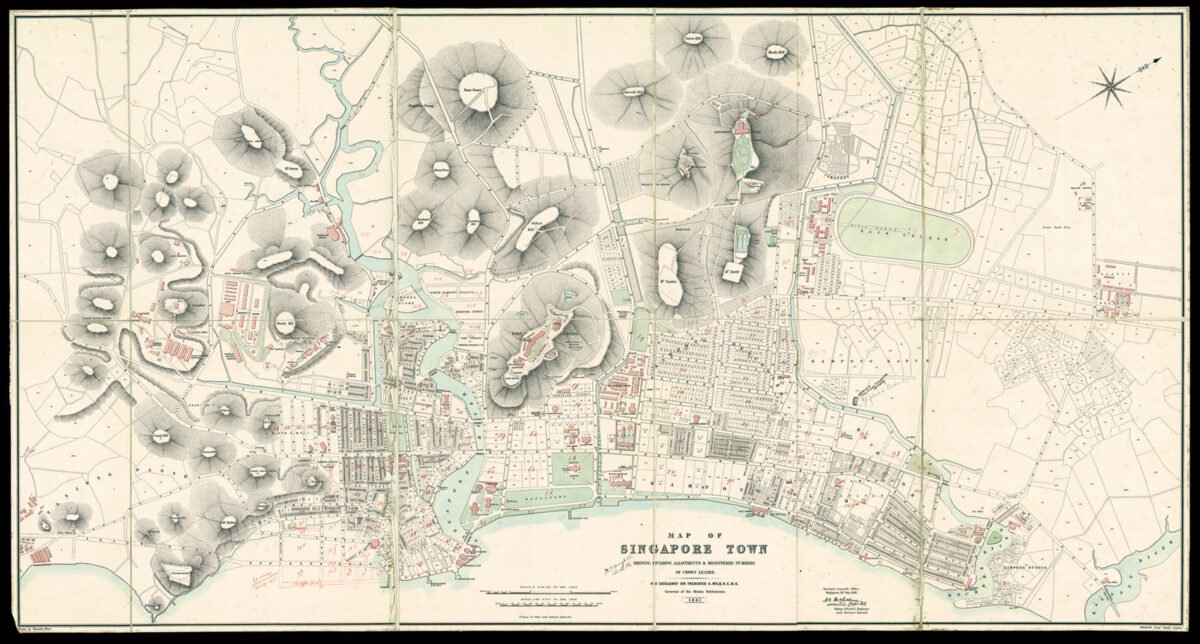 The map is orientated with west at the top and stretches from north to south from Kallang River to Tanjong Pagar, and west to east from Cairn Hill to the Esplanade. The most prominent geographical feature is Singapore River, which can be traced to beyond present day Zion Road. All the major geographical features and public buildings are marked, including hills, rivers, parks, law courts, police stations, hospitals, and barracks. Notable buildings include St Andrew’s Cathedral and Fort Canning. It was in the bunker of Fort Canning that General Percival decided to surrender British-held Singapore to the Japanese in 1942 during the Second World War.

To the left of the title is the manuscript signature of H.T. Haughton, indicating that it was his personal copy. Haughton took a leading role in the administration of the Straits Settlements, a British colony comprising Singapore; the Malaysian islands of Malacca, Dinding and Penang; and the Christmas and Cocos Islands. He became a Justice of the Peace in Singapore in 1883, and acted as Collector of Land Revenues from 1885. By 1896 his roles included Acting Assistant Colonial Secretary, Clerk of Councils, Official Assignee and Registrar of Deeds. Alongside his role in colonial government, he also wrote on Singaporean culture for the local journal of the Royal Asiatic Society, including a piece on the etymology of Singaporean street names. The extensive manuscript additions to the map, including the extension of the street system to the lower left, suggest that it may have been used during research for the piece. His stellar career was cut short by a premature death in 1897.

The surveyor, Captain Henry Edward McCallum, was in the early days of his colonial career. McCallum was appointed acting colonial engineer and Surveyor General in 1881. After working in the Straits, he went on to succeed Sir Herbert Murray in Newfoundland, and like his predecessor, clashed with the Newfoundland Government. The Newfoundland Premier, Sir Robert Bond, asked McCallum to dissolve the House of Assembly. McCallum’s refusal eventually resulted in his recall. He also served as the Governor of Lagos, Natal and Sri Lanka (Ceylon). While in Singapore, McCallum designed the Raffles Library and Museum on Stamford Road (today’s National Museum of Singapore), which was opened in 1887. McCallum Street, in downtown Singapore, is named after him.

The map is dedicated to Sir Frederick Weld, who became Governor of the Straits Settlements in 1880. His distinguished colonial career included serving as Premier of New Zealand, Governor of West Australia and Governor of Tasmania. Two roads are named after him in modern day Singapore.

Rare; we are able to trace only one institutional example: that in the National Library of Singapore.