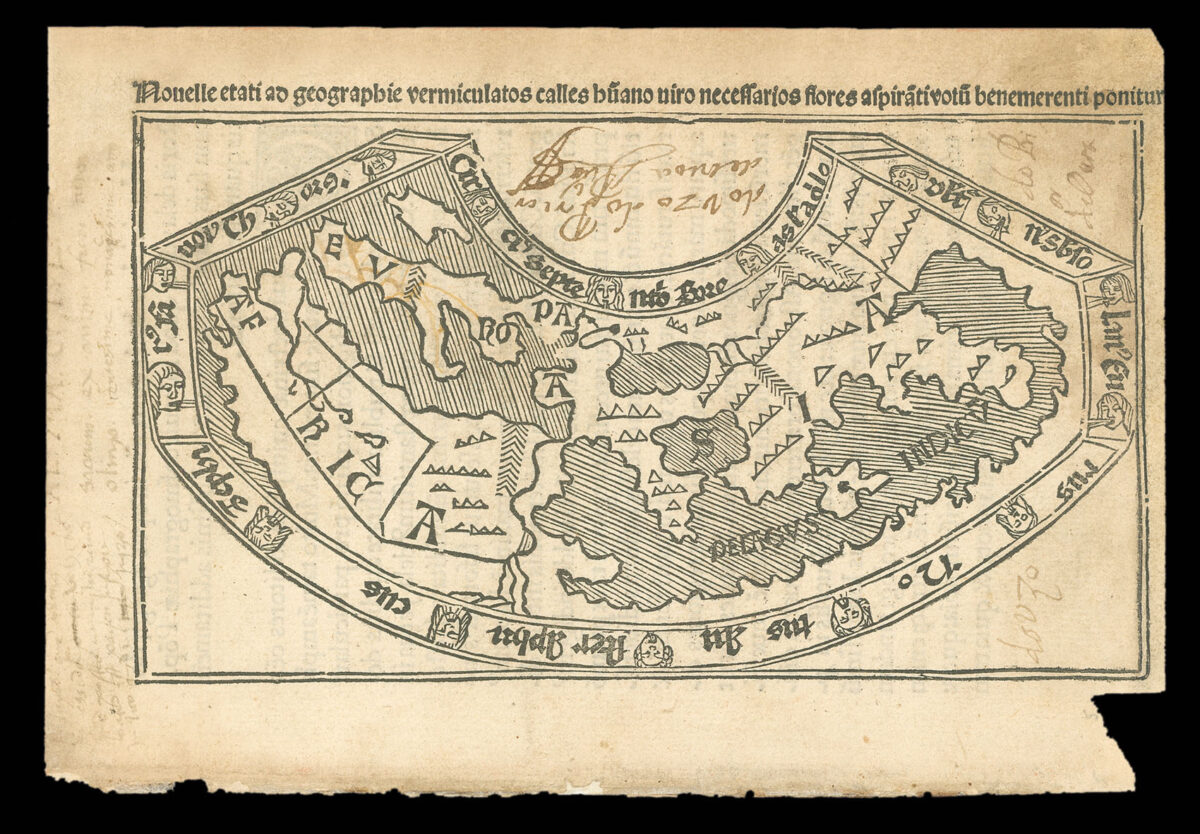 An incredibly rare reduced version of Pomponius Mela’s world map, first printed in the 1482 Venice edition of his ​‘Description of the World’, or ​‘Cosmographia’, with two pages of accompanying text. Pomponius Mela (f.37–42 AD) was a Roman geographer, and the author of the earliest Latin geographical treatise and the only Roman work devoted to the subject. Very little is known about his life apart from the sparse biographical details given in the work, from which we know he was born in Spain. It was written in the style of a voyage around the three known continents: Africa, Asia and Europe; Mela was the first western writer to mention the Orkney Islands.

The ​‘Cosmographia’ was republished for the first time in 1471. The original was compiled according to the precepts of Mela and Ptolemy, possibly by the Venice publisher of the ​‘Cosmographia’, Erhard Ratdolt. The Mela map and the TA diagram he produced for a 1480 edition of Rolewinck were the first woodcut maps made in Italy. The present example is a reduced version of the Venice map produced for a later edition of the ​‘Cosmographia’ printed in Salamanca in 1498. This is the first and only Spanish-origin incunable map. The accompanying text contains a reference to the discovery of the Americas, ” which is the ​“earliest association of the news of a western discovery with one of the geographical texts of the ancient world” (JCB, 1951, p.5). The mystical continent Terra Australis is mentioned — ​“an unknown southern land which encircles the Indies” — but not shown.

The map is drawn on a conical projection, with wind heads in the surrounding frame. It departs from earlier cartography because it shows the African coast receding in a southeast direction along the Gulf of Guinea, following Portuguese discoveries made in the 1470s; the first map to portray this important step in European understanding of African geography, which would eventually culminate in the rounding of the Cape of Good Hope in 1488. The only toponymic information on the map is the names of the three known continents and the Indian Ocean. The reduction in size necessitated some changes from the original, including the omission of Ireland and the distortion of the Arabian Gulf. The decorative portico surrounding the map in the original has also been removed.

To the best of our knowledge, this map has never appeared on the market before. The 1498 Salamanca edition was only the second version after the 1482 edition of the ​‘Cosmographia’ to contain a map. They were often removed, and so are rarely found with the accompanying text, making this example not only a landmark in cartography but also a rarity in the trade. 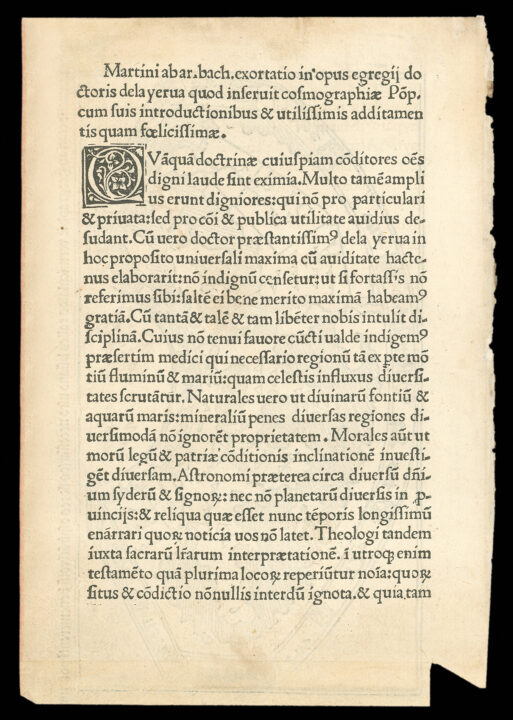 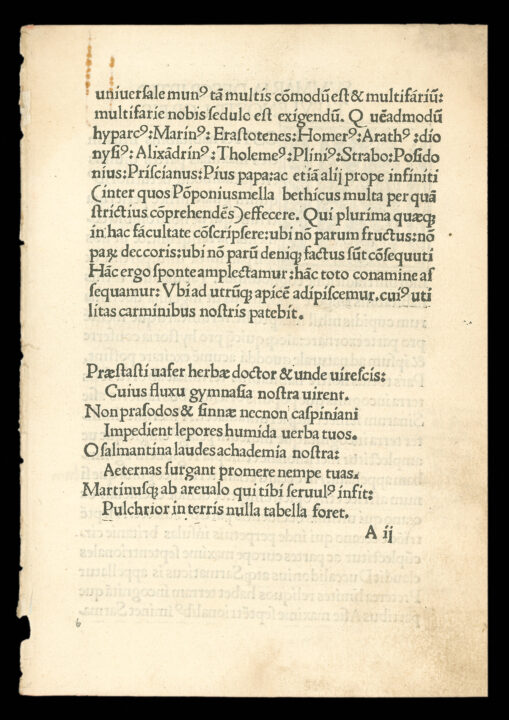 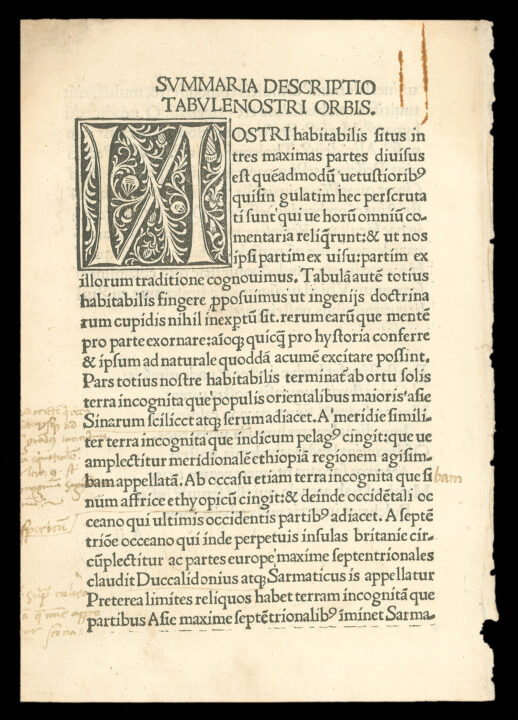 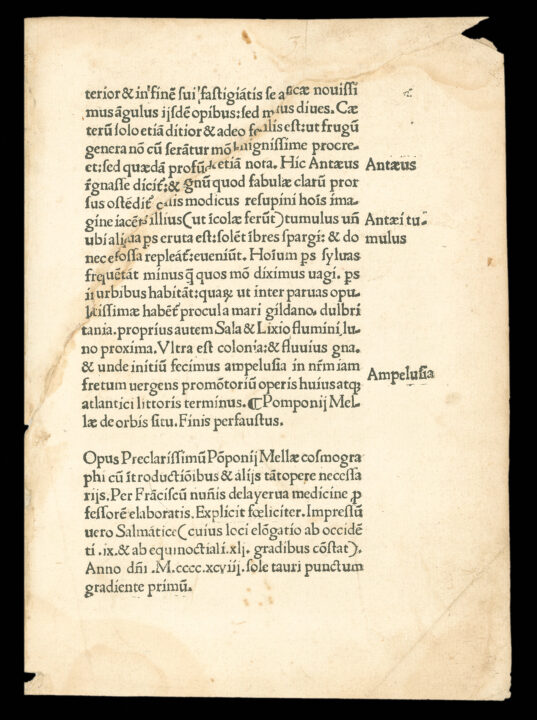