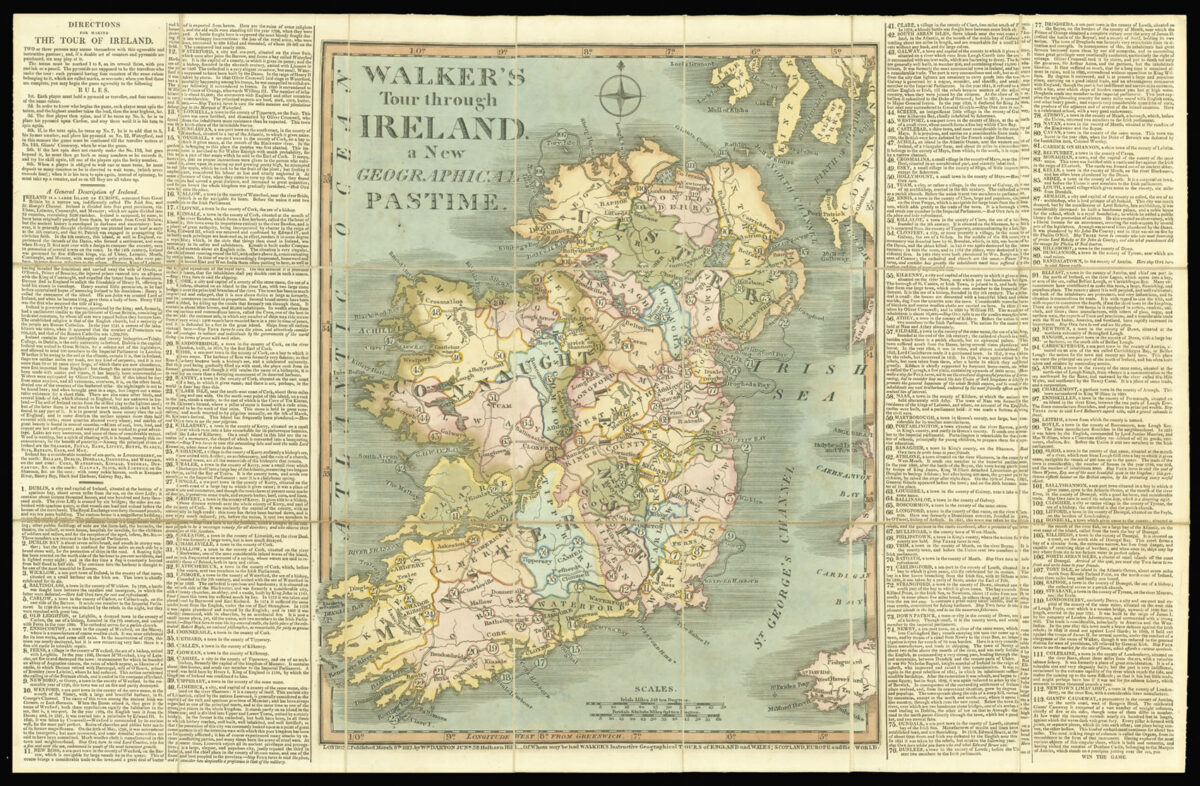 The rules of the game are set out to the upper left, followed by a brief introduction, providing information upon the population, town and cities, flora and forna, and geographical make up. The player begins his journey in Dublin, the capital, and as the text to the left of the map informs us has numerous public buildings of note including the newly built Royal Exchange, the parliament, and the customs house. Upon his travels the player passes through Limerick, Cork, Belfast, and Londonderry; finally arriving at no. 113, the Giants’ Causway, which ​“is composed of a vast number of upright columns, chiefly of five or six sides… At lower water the causeway extends nearly six hundred feet in length, against which the waves dash with great fury… the most striking range is called the Organs, from its resemblance to that form of instrument.“

John Walker of Cockermouth (1759–1830) a physician, geographer and engraver — began his career in Dublin, engraving plates for Thomas Walker’s ​“Hiberian Magazine”. He founded a school in the city in 1784. In 1795, he travelled to London to study medicine, leaving the school in the hands of the essayist John Foster (1770–1843). His studies would take him to Paris and Leiden where he would graduate in 1799. He was able to finance his studies by the generosity of Anne Bowman of Cockermouth, whom he married at Glasgow 23 October 1799. Upon his travels he met and befriended radicals including Tom Paine, and James Napper Tandy, and became involved in many radical causes. He saw service as an army medic during the Egyptian Campaign of the Napoleonic Wars, and later became a leading exponent and advocate of vaccination.

As well as the above he also championed youth education. To this end he published several geographical works, including ​‘Elements of Geography’, in 1788, and ​‘The Universal Gazetteer’, in 1795. In 1808, he would team up with William Darton Senior to publish, ​‘Walker’s Universal Atlas for the use of schools’, which would go through numerous editions. It was a this time that he began publishing, along with Darton, his geographical games, the first being a tour through England and Wales, in 1809. He together with William Darton Junior would continue to publish geographical games for the next 20 years.