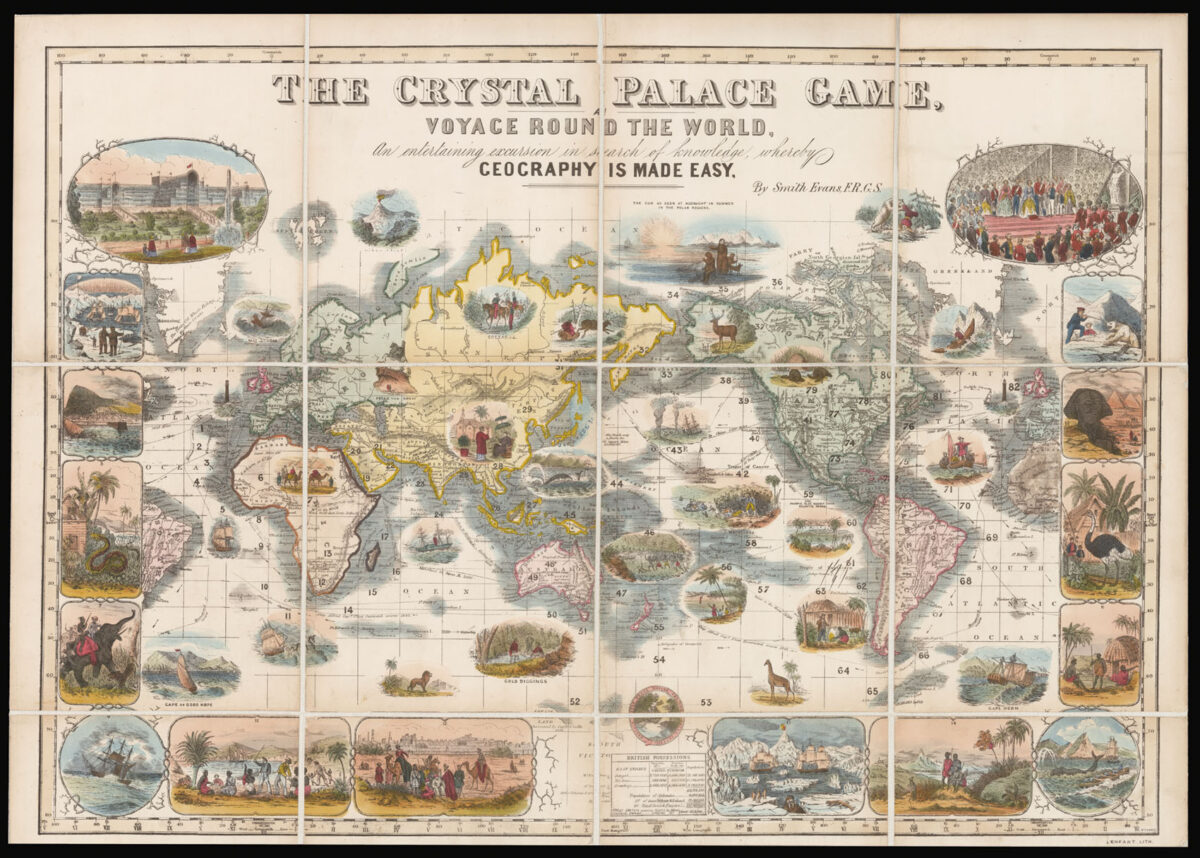 The Crystal Palace Game A Voyage Around the World, an interesting excursion in search of knowledge, whereby geography is made easy.

An educational world map game to celebrate the Great Exhibition.

Henry Smith Evans was a member of the Royal Geographical Society and a noted mapmaker; he is best known for his ​‘Map of the World on Mercator’s Projection shewing the British Possessions, with the date of their accession, population, &c., all the existing Steam Navigation, the Overland Route to India, with the proposed extension to Australia, also the route to Australia via Panama…’, which was published under a variety of slightly different titles between 1847 and 1852 and possibly later.

The knowledge he acquired in creating this made him ideally placed to produce this map game, lithographed by the highly skilled John Anthony L’Enfant (1825?–1880) and based on a voyage round the world. ​‘The Crystal Palace Game’ was almost certainly produced to coincide with the removal to Sydenham of the great ​‘Crystal Palace’ originally built for the Great Exhibition. The exhibition is properly called ​‘The Great Exhibition of the Works of Industry of All Nations’. The brainchild of Prince Albert, consort of Queen Victoria, the exhibition was held in Hyde Park, in London, between May and October 1851. Ostensibly designed to showcase the innovations of all countries, the exhibition was really intended to highlight the United Kingdom’s pre-eminence as world leader in arts, science and technology and her global dominance. As the motto at bottom centre attests – ​‘Britain upon whose empire the sun never sets’.

The track of the players round the game is marked with numbered steps, starting from the Azores (number 1) and continuing round the world, coasting Africa, through Arabia, round India, through the East Indies, along the Pacific rim, back to Australia then round the coast of South America, past Cape Horn and then up round Brazil through the West Indies, along the eastern seaboard of the United States to Newfoundland and from there making the transatlantic crossing to the British Isles.

The index booklet, which would explain the various images, is not present. The large images are all numbered, but the numbers do not tally with the numeration of the map. Without the rules it is impossible to gain a complete understanding of the intricacies of the game, although it may well be that squares 11, a ship threatened by a large sea-monster, and 46 and 58, mariners being killed by hostile natives (58 being Cook) are ​‘death’ or at least penalty squares.

Rare we are only able to trace British Library, Yale Centre for British Art, National Library of Australia.